EJ Dillon counted Tolstoy and Dostoevsky among his personal aquaintances 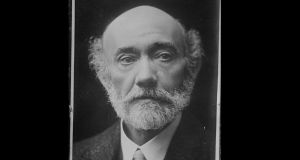 Dublin-born journalist EJ Dillon was regarded as an authority on the politics and culture of the Russian Empire. Photograph: Library of Congress/Public Domain

Late in his era-spanning career, the Irish journalist EJ Dillon would write about the day in December 1890 when he walked through a Russian forest with the celebrated novelist Leo Tolstoy.

He was not the only Irish pilgrim to visit Tolstoy’s famous estate Yasnaya Polyana - the Land Leaguer Michael Davitt would later make the journey - but Dillon was the only Irish visitor to converse with the War and Peace author in fluent Russian. How did a journalist from a modest Dublin background find himself at home with one of the towering figures of Russian literature?

Emile Joseph Dillon was born on March 21st, 1854 in Dublin. Kevin Rafter, who has researched and written extensively on Dillon’s career, describes Dillon’s childhood as being marked by his father’s dedicated commitment to both the Catholic faith and the family hardware store.

Dillon’s scholarly ambitions upset his father’s dream of having a priest for a son. Dillon, as a young wandering intellectual, studied first in western Europe, attaining a doctorate from the University of Leipzig, before setting off for Russia, where he would make his name as an authority on the vast Empire’s political and cultural life.

Dillon arrived in the Russian Empire in 1877. He later recalled that one of his earliest memorable Russian experiences was being chased by a group of “half-drunken peasants” who suspected him to be a spy when they saw him consulting a Russian grammar book. The moment points to two important facets of Dillon’s Russian career: his talent for languages (it was said he spoke 26), and his capacity for finding himself in situations that made for remarkable anecdotes.

After a scholarly career that included a professorship at the University of Kharkov, Dillon took to journalism, eventually becoming the Russian correspondent for the Daily Telegraph in 1887, a post he held until 1914. One of the standout moments of his career came in the mid-1890s when Dillon, disguised as a Russian officer, reported from Turkey on the “Hamidian massacres”, wherein Ottoman rule resulted in extreme sectarian violence directed against Armenians. Dillon’s dispatches helped foster public outcry against Turkey, particularly in Britain.

Dillon’s reporting for the Daily Telegraph was highly respected. Count Tadasu Hayashi, a senior Japanese diplomat, noted in his memoirs that Dillon’s statements on Russia were “always regarded as being based on the highest authority”.

Prozhito, a Russian-language database of digitised diaries, provides some insight into the reach and appeal of Dillon’s journalism. Spanning the political world, entries in the database for 1916 show that Francis Bertie, the British ambassador in Paris, and Mikhail Lemke, a Russian revolutionary and historian, were both reading Dillon’s reports. Tatyana Tolstoy, daughter of the novelist, also wrote of Dillon in her diary when he visited the family estate in December 1890.

Leo Tolstoy was far from the only titan of19 century literature and politics who personally knew this Irish journalist. Dillon noted his personal acquaintance with Fyodor Dostoevsky. He even claimed that on the “bright cold Saturday morning” in 1881 when Dostoevsky’s funeral took place, he helped carry Dostoevsky’s coffin out of the famous writer’s apartment.

Perhaps Dillon’s most consequential relationship was his role as advisor and confidante to Sergei Witte, a major political figure of the late Russian Empire. In a biography of Witte, Francis W Wcislo suggest their relationship was of mutual benefit, with Dillon acquiring an “insider’s perspective to sell to Western journalism” and Witte finding “a mouthpiece to the West for his version of events”.

Although Dillon recognised the iniquities of the Tsarist regime, his personal and professional circles in Russia were largely linked to the world that was overthrown in the revolutions of 1917. The Eclipse of Russia, a 1918 work in which Dillon attempted to chart the flow of events that had merged into the Russian Revolution, was dedicated to “the memory of my friend and Russia’s unique statesman” Sergei Witte.

As Lenin’s Bolsheviks set about dramatically reshaping the society Dillon once knew intimately, the Irish writer spent his life beyond Russia. After the first World War, he reported on the Paris Peace Conference and published a 1921 work on Mexico.

In the late 1920s, Dillon finally returned to see what Soviet-style socialism made of his former adopted home. He published an account of his visit in 1928 that depicted a civilizational experiment whose ambitions both impressed and unsettled him. An ideology he once described as a pathology now seemed to him a “transcendental” phenomenon. The Soviet system, Dillon wrote, was a “stern reality, smelling perhaps of sulphur and brimstone, but with a mission on earth, and a mission which will undoubtedly be fulfilled”.

Dillon’s Soviet travelogue was well-received in the radical circles of his native Ireland. The Irish Friends of Soviet Russia, a pro-Soviet society of radicals and intellectuals, offered the book as a raffle prize, while the Irish communist paper The Irish Workers’ Voice told readers to “make straight for the nearest library” to pick up a copy.

In June 1933, EJ Dillon died in Barcelona. Fittingly given his prolific writing career, there was still a publication yet to come. His final work Count Leo Tolstoy: A New Portrait, which recounted Tolstoy’s career and described the December days when the pair met in Yasnaya Polyana, was published posthumously in 1934.

This Extraordinary Emigrants article was written by Dr Maurice J Casey, DFAT historian-in-residence at EPIC The Irish Emigration Museum in Dublin’s Docklands, an interactive museum that tells the story of how the Irish shaped and influenced the world.