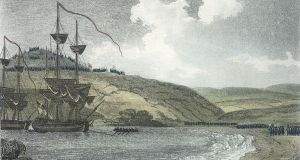 As darkness fell off the Pembrokeshire coast on the evening of February 22nd, 1797, 16 boatloads of French and Irish troops, arrayed in dark brown and black uniforms, made their way ashore at Carregwastad Point near the small port town of Fishguard. Dubbed La Legion Noire and numbering over 1,400 well-armed men, their stated objective was the capture of Bristol, then England’s second city.

In fact, it was actually a diversionary landing; their real purpose was to tie up as many British troops as long as possible to draw attention away from a much larger French invasion of Ireland. Led by an Irish-American colonel by the name of William Tate, it has since gone down in history as the last invasion of mainland Britain.

Tate is a somewhat enigmatic figure and many of the sources that make reference to his early life conflict with each other. Some historians have mistakenly stated he was as old as 70 at the time of the invasion, while more recent scholars have asserted he was no more than 44 years old. We do know however that he was a former US Continental Army lieutenant, having served with the 4th Regiment (Artillery) of the South Carolina line during the American War of Independence. He is also thought to have had family ties to county Wexford.

We’re told he served throughout the war, and would have been present at some of the largest battles of the conflict, including the battle of Sullivan’s Island, and the bloody siege of Charleston. After the war ended he found himself looking for a new commission, and frequently wrote to president George Washington seeking an appointment.

In one letter he asked for permission to leave the United States and become a military adviser to the Ottoman Empire, and advanced the idea of creating a mutually beneficial trade agreement between the two states. He doesn’t appear to have received approval from Washington, but may have travelled to the Levant nonetheless.

Either way he had returned to South Carolina by 1793, and played a role in an abortive attempt by the French consul in Charleston to seize the town of Pensacola in West Florida from the Spanish Empire. He was appointed a colonel in the French army, and set about building alliances with the native American tribes along the border. When the campaign was aborted after pressure was applied by the US government, Tate fled to Paris, arriving in 1795.

At the time, Paris was a hot bed of revolutionary activity, and within a year of his arrival Tate had become acquainted with Theobald Wolfe Tone, a founding member of the Society of United Irishmen, an organisation intent on creating a republican government in Ireland that could bring about civil, political and religious liberty along the lines of what had been established in France.

Tate aided Tone while he lobbied for a French invasion of Ireland, which culminated in the expedition under general Lazare Hoche, which sailed from Brest in December 1796. Arriving in Bantry Bay on December 21st , the fleet, which carried approximately 15,000 troops, was battered by storms and was unable to land. The invasion was a failure, and more than 2,000 soldiers were drowned or captured. The expedition was called off, and by mid-January most of the ships had returned to their home ports.

Nevertheless, repeated attempts were made over the next 18 months including the landing at Fishguard, commanded by Tate. The landing itself proved an underwhelming affair. It got off to a poor start when a boatload of ammunition capsized during the landing, and was fatally undermined when 800 irregular soldiers, mostly convicts assigned to the invasion, became intoxicated on Portuguese wine taken from a trade ship wrecked upon the Welsh coast.

Believing themselves heavily outnumbered, the remaining French forces surrendered to a hastily assembled combined militia and yeomanry force at Goodwicks Sands on the morning of the 24th, and were taken prisoner. They were later returned to France during a prisoner exchange the following year. Disappointed, Tate appears to have returned to the US and is known to have been resident there in 1809.

His transatlantic story demonstrates both Irish and Irish-American involvement in international republicanism, and the increasingly global perspective of these would-be revolutionaries. Despite its abject failure, the landing at Fishguard still holds the inglorious distinction of being the last invasion of mainland Britain.