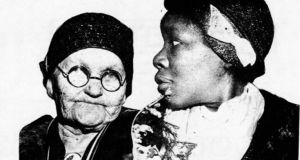 Mary Mooney and Viola Montgomery, mother of Olen, one of the Scottsboro Boys, photographed together in April 1932. Credit: Labour Defender.

In late February 1932, Mary Mooney, an 84-year-old woman from Mayo, stood on a stage before thousands in New York’s Coliseum theatre. Weary from travel and suffering from illness, Mooney was unable to speak clearly as she stood before the microphone. This did not dissuade the attendees in the hall, many of whom knew her affectionately as “Mother Mooney”. One reporter described the “amazingly cosmopolitan” audience cheering and jostling to see this Irish emigrant, with people climbing on chairs to catch sight of her.

Mary Mooney did not need to speak at length. Her message was a simple one. In meeting halls across the United States and in European capitals such as London, Berlin and Moscow, her demand was repeated: the immediate release of her son from a California prison, and justice for a group of African American teenagers facing execution on Alabama’s death row.

Mary Mooney was the mother of the Irish-American radical Tom Mooney, framed and imprisoned for his alleged involvement in a 1916 San Francisco bombing along with his friend Warren K Billings, who became subject of an international justice campaign in the interwar period. The visiting room of San Quentin prison hosted campaigners wanting to meet this world famous prisoner, including leading Irish activists like trade-unionist Jim Larkin, and feminist Hanna Sheehy Skeffington. Beyond the prison walls, it was Tom’s mother Mary who became one of the most recognisable faces of the campaign for his release.

Born Mary Heffernan in Belmullet, Co Mayo around 1849, Mary Mooney left for the US in her late teens. In Holyoke, Massachusetts, she married a miner, Bernard Mooney, with whom she had three children. Bernard died when their eldest son Tom was 10, and Mary took up work in a paper factory to support her young family. Tom became involved in radical politics through groups such as the Socialist Party of America and the Industrial Workers of the World, eventually becoming a leading organiser of union activity in California.

By the time her son was imprisoned in 1916, immediately suspect in the eyes of the authorities because of his revolutionary politics, Mary Mooney was in her late 60s. She dedicated the rest of her life to securing his release. As “Mother Mooney”, portrayed as the militant mother of an unjustly convicted son, she became a symbol of a broad campaign for political prisoners.

The International Red Aid, an interwar Communist-led organisation agitating for “class-war” prisoners, forcefully advocated on Tom Mooney’s behalf in its worldwide sections. Branches built campaigns on behalf of persecuted leftists, particularly prisoners in the US, Fascist Italy and Nazi Germany (while avoiding the plight of political prisoners within the Soviet Union).

In 1932, the International Red Aid called on its sections to link Tom Mooney’s case to that of the Scottsboro boys, a group of African-American teenagers falsely accused of rape and sentenced to death, as a means of “breaking the walls of racial prejudice”. The initial Scottsboro trial of the nine accused was conducted in just three days with an entirely white and male jury. The sentence of death by electrocution delivered for the teenagers, the youngest of whom was only 13 years old, prompted a campaign for a reprieve and retrials.

In 1932, an international Scottsboro-Mooney tour was organised. Mary Mooney was enlisted to travel the world, from San Francisco to Moscow, as part of the campaign. Her travelling and speaking companions included Ada Wright, the mother of one of the Scottsboro boys, and Richard B. Moore, an African Caribbean civil rights activist, ensuring that the interracial solidarity promoted by the campaign was reflected on its platforms.

With Los Angeles hosting the Olympics that year, world attention was focused on the US. During the closing ceremony of the games, protestors bearing “Free Tom Mooney” signs invaded the running track. The global campaign certainly assisted in the eventual exoneration of both Mooney and the Scottsboro boys, although years of campaigning remained ahead for Tom Mooney in 1932, and decades more in the case of the Scottsboro boys.

Mary Mooney never saw her son freed from prison in her lifetime. Her funeral in September 1934, after a summer of wide-scale labour unrest in San Francisco, was attended by thousands, with one notable absence: her son Tom, who was refused permission to attend. Her casket was placed in the city’s civic auditorium, with a banner “Mother Mooney, We Will Finish Your Fight” hanging in the hall.

Tom Mooney was pardoned and released from San Quentin in 1939. In November 2013, the state of Alabama’s parole board granted a posthumous pardon to the final three Scottsboro boys, who did not live to see their exoneration. The role played by an emigrant woman from a Mayo in this global campaign for justice remains a little-known story.

This Extraordinary Emigrants article was written by Dr Maurice Casey, DFAT historian-in-residence at EPIC The Irish Emigration Museum in Dublin’s Docklands, an interactive museum that tells the story of how the Irish shaped and influenced the world.