‘Montreal was love at first sight; all these years later, it still is’ 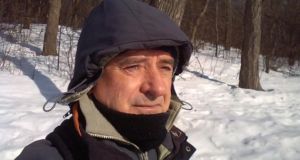 Patrick McKenna: After two years, I learned enough French to ask someone out

I arrived in Canada on an unbelievably cold Friday evening in January 1975, on my own, in a small WASP town in rural Ontario, where I had no family or friends to meet me. The town of 5,000 people had an immigrant community of three UK expats.

The bus dropped me at a motel on the side of a highway on the outskirts of town. On Monday morning, I walked along the hard shoulder to the factory to begin a job that the locals thought should have gone to one of their own.

When I left Belfast the violence was intense but so too was life. In my small town, life, outside of work, was the opposite. Alone, without the comfort of a cinema, or cafe, before the internet and Skype, time was long indeed.

As one of 10 children, I knew nothing about solitude, much less isolation. In my semi-basement, the five-month winter was a black hole of isolation.

On winter evenings, I bundled up and tramped for 20 minutes through the empty town to the library. There I stayed until they chucked me out. I took up hobbies, met people, accepted dinner invitations and so on, but it was a losing battle. I couldn’t see me living out my days there.

After three years, I’d decided to go home and damn the car and truck bombs, when fate intervened. I accepted a job in Montreal. My new city was love at first sight; all these years later, it still is.

After two years, I learned enough French to ask someone out. After that my language abilities took off and so did my new life. That same year – 1980 – I became a citizen.

Reaching retirement age has meant reflection on what Canada means to me. Unlike Ireland, Canada is just too big to know. If I don’t know it, how can I love it? How can it feel like home?

It’s Montreal, the town I know, and love, so well, that’s home.

But after 40 years here, there is much I still have to learn. Still, ahead of Canada Day tomorrow, I’d like to share 10 of my personal insights into the country and its history, in the hope that they may be useful to others who are not so far along the road.

The Canada Confederation launched in 1867 with The Constitution Act, and evolved through 20 acts of the British parliament before culminating in the 1982 Canada Act that brought the country’s constitution home. Canada though, remains a work in progress: Quebec hasn’t signed onto the Constitution, the Queen of England remains head of state, and her governor general approves Canadian laws and gives permission to the prime minister to dissolve or form a government. Citizenship means swearing allegiance to the Queen. Not everyone appreciates this.

Hugh MacLennan’s novel The Two Solitudes that described the French and English divide fell short of predicting how it would widen during Quebec’s Quiet Revolution, General De Gaulle’s Vive le Quebec libre! (July 24th 1967), the (1970) October Crisis, the 1976 election of the Parti Quebecois, its Charter of the French Language and two separation referenda, with the second coming within 50,000 votes of a Quebexit. English Canada may be a tad dull; Quebec where I live isn’t.

Although Canada places sixth (2017) in quality of life, its indigenous peoples come in at number 63. Their four percent of the general population translates into one-in-five prison inmates. Their suicide rates are among the highest in the world. Inuit who move south to escape third-world-standard drinking water and housing crises, become victims of rental discrimination and sink into alcohol and substance abuse. Indigenous peoples, especially women and girls, may be more at risk in Canada than refugees in their homelands. Increasingly, their treatment by Canada is referred to as cultural genocide. Indigenous peoples want Pope Francis to apologise publicly for the residential schools, as Benedict XVI did in Ireland in 2010 for victims and survivors of abuse by the Church.

Canada works well for its native-born who tend to enjoy easy access to for-life-employment in the public and para-public services. It has jobs for newcomers who are skilled or semi-skilled workers. However, some newcomers who arrive with a university degree struggle. Statistics Canada reports that the university educated constitute half of Canada’s immigrant poor. Professionals, especially, struggle with licensing requirements. Irish professionals though, do well: their match rate with job requirements approaches that of the native-born.

Canada’s habitable and arable areas are only a few percent of its vast (9.2 sq km) territory. A strip about 100km wide and 1,000km long between Quebec City and Windsor holds about two-thirds of the population. Ninety percent of newcomers settle in one of six major cities – Toronto, Vancouver, Edmonton, Calgary, Winnipeg and Montreal. Canada is the great indoors, urban or suburban, lifestyle. If you take a road trip, though, you will appreciate the vastness and beauty of this land.

Bottom line: Canada is the world’s second coldest country. Winter weather varies widely by region, wildly from day to day and sometimes even within a day. Quebec, where I live, and Kamtchatka, in Western Siberia, share the distinction of receiving the most snowfall in the world. In the Prairies, you can see snow every month of the year. In Vancouver, you’ll get by with wellies and a brolly. Summer in the city is hot – heat warnings are frequent in Toronto – and humid. Fall is beautiful. There isn’t much of a spring.

In the 1950s, with the sun setting on the British Empire, Canada hooked up with Uncle Sam. Canada did well by riding the economic coattails of the emerging superpower. With the US next door, Canada was safe from invasion, so it could trim back on defence spending. However, the relationship has had its ups and downs. Prime minister Pierre Trudeau (Justin’s dad) stayed out of Vietnam and enraged Richard Nixon by taking in more than 40,000 draft dodgers and deserters. Jean Chretien turned down George Bush on Iraq. Justin Trudeau has kept relations with President Trump on a fairly even keel.

Canada’s early start with homegrown new technologies – aviation, radio, the telephone, vaccines – stumbled in the mid 20th century when it relinquished its home grown jet fighter programme in exchange for the Auto Pact with the US. In the early 1970s, its nuclear industry evaporated after Three Mile Island. Much of its low-tech industry is now in Mexico or the southern US. Its oil and natural resources industries are misaligned with a post COP21 – greener – world.

The health care system is a pillar of Canadian identity. It works well overall, but is by no means comprehensive. One cause of concern is the escalating cost of medication. Lacking a drugs plan (outside of Quebec), the cost of medication may mean financial ruin. Some terminally ill Canadians choose death over leaving a spouse bankrupt and homeless. The Truth and Reconciliation Inquiry into Residential Schools, a $100 million harassment settlement by the Mounties (RCMP) and other scandals have tainted Brand Canada’s pristine image.

In the long term, Canada doesn’t guarantee significant material betterment relative to staying at home. What it does guarantee – if you really commit to it – is long term adaptation and re-jiggering of your life. My life as an Anglo in Francophone Quebec has surely crystallized this premise, but it is no less true elsewhere in Canada. Will all that change be worth it, in the end – is the “to be or not to be” question of emigration to Canada (or anywhere else).