The closer we get to Ireland, the more we notice the cold 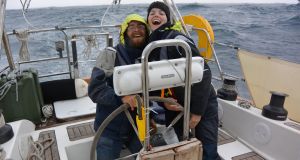 Claire and Nick: It’s eight months since they first set sail, but Ireland is in sight.

Claire McCluskey and her partner Nick are sailing back from the Caribbean to Ireland. This is part six of her Diary from the Sea.

When we left Ireland by sailboat on 27th September 2016, we had no idea what we were letting ourselves in for. Neither my partner Nick nor I had ever sailed offshore before and the voyage ahead was full of absolute unknowns; I’ll never forget the sheer and uncertain terror I felt, sailing off into the dark on that first evening when we departed from Crosshaven.

Indeed, there were several events along the journey wherein we felt completely out of our depth. We learned a great deal as we went along, but there is no doubt that our voyage’s success is thanks in no small part to the various crew members that helped us make our way.

A mighty 29 rogues, of seven different nationalities, helped us to sail our boat half-way around the world. Of these, we only knew about half before they stepped aboard. Spontaneous, adventurous and mostly downright mad, we have met some wonderful people through sailing.

It seemed fitting then, on the eve of the final departure of our journey, to celebrate the Rogue Trader crew in its entirety with a painting on the pontoon in Horta. A time-honoured tradition - sailor superstition in these parts advises boats to leave their mark to ensure a safe onward journey. We marked down the name of each and every sailor that joined us on our round trip from Ireland to the Caribbean, and with that, slipped our lines, crossed our fingers and headed out into the open ocean for what was to (hopefully) be our last time.

Everything about this departure felt so different to our first. Unlike that initial 500-ish Nautical Mile trip from Cork to Spain (which, tellingly, was clumsily diverted to Cornwall) this time we felt ready, we felt rested and we had an idea of what was ahead of us. Remembering the constricting pre-departure anxiety we both often experienced in those early days, we now remarked on how casual we felt about this last trip - a mere 1200NM ‘hop’ towards home.

We sailed away from the island of Faial, bound for Ireland, on the afternoon of May 27th, 2017, exactly eight months since we first left home. It was a pleasantly warm evening, with a rare, clear view of the volcano on the nearby island of Pico; the scant cloud clinging to the top of the peak like a doffed cap. I went down for an early rest like I usually do, leaving Nick to take the first watch, anticipating a long night ahead as the crew got settled into the rhythm of the sea. We made our course carefully between the islands of Sao Jorge and Graciosa throughout the night and were clear into the open sea by the following day.

The sunny warmth and clear cloudless skies that bade us farewell from the Azores were unfortunately not to follow with us, and for those first few days we had nothing but grey, grey, grey all around. The sun did not rise so much as the morning transitioned from a dark to a lighter shade of grey. The benefit of travelling north however, does mean that we have more daylight hours, which helps for visibility and ease of mind when standing watch alone at night.

The winds, though flukey and inconsistent at first started to settle in nicely a few days into the trip; a steady 15 or so knots on the beam, ensuring good boat speed. However, the swell in the open Atlantic is impressively huge and obnoxious, causing the boat to roll from side to side incessantly as it pushes in from the side, underneath and beyond us.

The other notable change we have encountered on our progress northwards is the cold. Our lives have been undeniably cooler ever since we were only a few days out from Antigua, but we are now experiencing full-on hat-and-gloves weather. Despite the scoffs I received when I first bought it (given we were then en-route to the tropics) I am now only too glad to have my trusty hot-water bottle to hand, with which I am developing a close marsupial bond.

There being five of us, our watch system works out as two hours on the helm each in turn, followed by a generous six hours off. But the cold and the rocking makes it difficult to feel rested, as you’re constantly moving, tensing against the motion of the boat, even in sleep. Appetites amongst the crew are varied; sometimes we aren’t up to cooking or eating much with all the rolling around, but we make an effort to make warm and hearty dishes, like stews, to stay nourished. Personally, I am absolutely famished, most of the time.

It’s been a tough old slog to the start of this leg, the lack of sun having a discernible effect on the ease of the passage. However, we remain resolutely upbeat, and the crew are getting along famously. This is lucky, given our close circumstances. It often strikes me as peculiar how ‘normal’ this life has become; living in a tiny room with four men for weeks on end, sleeping in stints on a couch, always one ear awake for changes in the weather.

Claire McCluskey is writing a weekly diary from the sea for The Irish Times for the duration of their journey. Follow their progress at facebook.com/sailingroguetrader