Piecing myself back together after moving home to Ireland

Swimming in the Irish Sea, I feel I am out of my depth, but at home 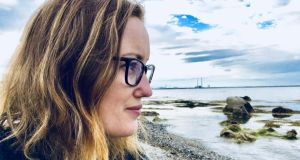 'On the list of things I’ve been anxious about with moving home, the pressure to become a sea-swimmer is right up there.'

The final push to leave New York was huge. Moving three people and their life’s worth of belongings to another country, across the Atlantic Ocean, was a task and a half. New York did not let me leave easily. Calling like a Greek siren, the city sang to me as the plane sped down the runway for take-off. I could see Manhattan out the window, glimmering, telling me not to go. “Come back, come back,” it called.

It’s been two weeks now since our return to Ireland, and the enormity of this move peaks and drops from hour to hour. Quietly, I’ve been moving about parts of Dublin, dipping my toe in when I feel brave enough. I’m not ready to be fully here yet. And I’m no longer in New York. There are days when I feel I am no place at all.

Since I’ve been gone, everyone has started swimming in the sea. There used to be just small clusters of people dotted across the country gutsy enough to swim in Irish waters, but now it seems everyone is at it. Including all my friends. On the list of things I’ve been anxious about with moving home, the pressure to become a sea-swimmer is right up there.

When I was five, a freak wave swept my grandmother and me off a cliff into the ocean. I almost drowned and I remember it vividly. My relationship with deep water is very complicated. Until as recently as last year, the only person I would swim in the sea with was my father. He was the one who got me back in the water after the trauma of being swept away by the wave.

Sitting right beside this fear of mine is a need, a yearning, to be near salty air. In New York, I craved the sea. Occasional trips to Coney Island and city beaches helped, but when you grow up in Dublin, so close to the bay, you want it every day. I didn’t necessarily want to swim in it, but I needed to be close to it, to walk on piers and rocks and beaches.

On a warm day last week, I drove past Seapoint and I felt the water calling me. Like New York called to me when I left, Dublin Bay called to me when I arrived. “Come in,” it said, “come in and soothe your soul.” Like noisy messengers, the seagulls have been circling over my house, shouting at me to go to the water. I’ve replaced helicopters and airplane flight paths for gulls. It’s an extraordinary transition.

Emigrating is like tearing a piece of yourself off your body and leaving it while the rest of you moves far away. There’s a constant ache for home. Some days it’s loud, some days it’s quiet. But it’s always there. And it doesn’t go away.

In the past 13 days, I’ve been searching for the piece of me I left behind. I’ve been in a frozen state of not knowing if I’m there or here. The gulls tell me I’m in Dublin, but my central nervous system is still in a city with constant honking and ceaseless noise. It’s a reverse emigration. I’m home, but part of me is still away.

After the logistics of housing, schools, transportation and jobs are sorted, returning emigrants are left with a crucial task: putting themselves back together again. Slotting new lives into old ones and finding pieces of yourself in different places like a jigsaw puzzle. We need to become whole in our new world order.

As the days have passed and my sense of being lost has grown, I’ve felt the need to do something to help me feel landed. Grounded. It’s easy to become consumed with unpacking and settling in and the cost of groceries in Lidl. It’s harder to take care of yourself, to recognise the red flags that could lead to depression or feeling like you don’t belong in your own place. I’m no stranger to these flags.

On Day 12, before I got out of bed, I scoured my brain, trying to remember where my swimming togs were. The sun was shining, my family was out, and the gulls were sitting by my window with megaphones, screeching at me to get down to the water. And so I did.

There were decent crowds at Seapoint. I sat on a rock, staring at the water, assessing how I could swim, without my father, and not have a panic attack. The move had frozen me and I knew the only way to move forward was to freeze myself awake in the sea.

I waded in, less afraid of the temperature (particularly cold, I overheard some regulars saying) than of the open water. A woman swam in front of me and I plunged downward and off the cement jetty beneath my feet. I looked up and saw Howth. I swam fast and not very far, but for the first time in my life, I was out of my depth, on my own.

The Irish Sea has been calling me since the day I left here. I don’t know where the piece of me is that I left behind, but I’m pretty sure I’m going to find it in these waters.

‘To die of love’: The 1968 sex scandal that still fascinates France
4

My cancer scare, the marathon and me
Real news has value SUBSCRIBE