‘Nothing, nowhere compares to the golden taste of Irish butter’ 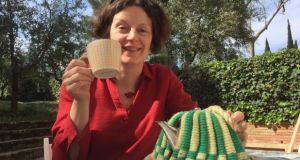 It’s a slow family Saturday morning in Dublin. Our eldest daughter has offered to make one of our favourite breakfasts, waffles. Norwegian waffles.

We have a standard recipe (with its secret ingredient*) but I’ve never written it into my recipe book. Instead it’s bookmarked on the iPad at Norwegian food site Matprat.no. I could of course find one in English, but this is more fun and reminds us of our old home in Oslo where we lived for seven years. Our daughter traces down the list of ingredients and measurements with her finger.

And the questions start.

“What does ss mean again?” (it’s a sugar spoon/dessert spoon)

“Should the flour be plain or self-raising?” (plain)

I’ve lived in a lot of places over the last 20 years (US, Canada, Norway, Italy, now Ireland) and in each one I’ve been preparing food for myself, the husband and eventually for our kids to eat. Not only does each country have its own cuisine, but also different cooking techniques, tools and measurements.

I am neither a serious foodie nor brilliant at number, so I feel I’ve done quite well to adjust to all the different methods. I’m a decimal kind of girl. Grams, kilos and litres suit me fine, and the best cookbooks include them as well as pounds and ounces. I would have grown up with both.

Moving to the US was my first wake-up call. The American use of cups and spoons for measuring is ingenious and it meant that for a few years I got by without buying a decent weighing scale. But when I’m on this side of the Atlantic and baking from my US days, I still get stuck when I see a recipe call for “2 sticks of butter” as that’s how they package (what they call) butter over there.

Liquid measurements are all over the place. There’s the British (and Canadian) 20oz and American liquid pint (16oz) and little-used dry pint (um, 1/8 of a dry gallon). This makes a difference when you’re working through a recipe like festive rum and liqueur eggnog from Joy of Cooking, my first cookbook. I’ll just take a litre, or liter, thanks.

My husband is, thankfully, brilliant at numbers (and we’re training up our younger daughter for this level of mental maths) and he’s used to my panicked shouting over the years from the various kitchens we’ve had, for on-the-spot conversions. “How many grams will 6ozs be?” or “If I double the sugar is that 7/8s of a cup?” I have of course been able to Google conversions for the last 10 years but it’s just not the same.

Our usual moving box marked “Kitchen” carries most of the basic tools for international baking: my two basic weighing scales, (the nice digital one is only for good occasions), my trusty nested cup measurements (bought one rushed New York lunchtime away from the office) as well as the plain plastic baking bowls I somehow picked up at the convenience store next to our hotel in Hawaii.

I’ve managed to keep the same brownie pan, long hand whisk and the little stone that keeps brown sugar moist in the jar. Electrical aids like blenders have come and gone as we moved from one country’s electrical system to another.

I’ve managed to master all types of cooker (gas, electric, induction or just temperamental), though I still struggle to remember that boiling an egg in sea-level Dublin takes less time than at my in-laws’ house 1km above sea level in Calgary. Or is it more time?

Now I’m back in Ireland I love to hang around the baking aisles and enjoy the long-missed offerings like caster sugar, golden syrup, several types of brown sugar, self-raising flour, proper oats and other heavy things I couldn’t smuggle back abroad with Ryanair. And let’s not forget the butter! Nothing nowhere compares to the golden taste of Irish butter - the only foodstuff I’ll admit to bringing back to Italy.

There’s also that staple bicarbonate of soda, poetically called bread soda in Ireland. When I first moved to Norway I needed to find some to make a batch of my (Darina Allen) scones. I was finally enlightened by a woman dressed in 19th century peasant costume. She was doing a live demonstration in a smoke-filled hut at Oslo’s National Folk Park, baking lefse (a delicious potato-based pancake) and she explained that the stuff I really need was hjørnsalt, a traditional Norwegian raising agent which originally was the powder from a deer’s horn. I tried it out but then had to find something resembling buttermilk to go with it - any Irish baker abroad will sympathise with that ongoing quest.

From country to country my favourite cookbooks have come with me, as well as the orange-coloured notebook I bought at the Bay in Toronto just after my eldest was born. In it I’ve been slowly recording the recipes that work best for us as a family, copied in by hand from books, websites, friends, aunts. And even more useful are the back pages where I’ve written down the party food menu for the kids’ birthdays in three countries: what a gift it’s been to see the names of the friends who came, kids and their parents. Memories we’ll keep for the next chapters - and recipes - in our lives.

*The secret waffle ingredient? A good pinch of ground kardemomme, or cardamom.

Emma Prunty is writing a series on her experiences of settling back into Dublin after many years abroad and seeing it with fresh eyes, along with her family of foreigners: a Canadian husband and Canadian/Norwegian kids. After living in the UK, US, Canada, Norway and Italy she knows there are pros and cons to every place you move to. She blogs at washyourlanguage.com