Welcome to my place . . . Marseille 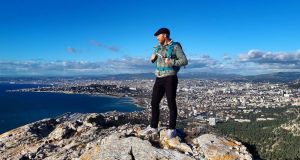 Dubliner Anthony Blackwell looks down on Marseille, where he works as a secondary school teacher

Dubliner Anthony Blackwell, graduate of NUI Maynooth and Trinity College, lives in Marseille where he works as a secondary school teacher at the International Bilingual School of Provence

One of the best situated cities in the Mediterranean basin. Anyone looking to make in-roads in the Luberon (to the north), Camargue (to the west) or Côte d’Azur (to the east) should head that way certainly, but above all anyone desiring to experience Marseille in its own inimitable right.

Aer Lingus operates a direct route from Dublin to Marseille in the summer, but regrettably not year-round. For many reasons Marseille is certainly overlooked; many travellers preferring to treat it as a point of embarkation rather than a destination itself.

I’ve met a diverse range of Irish expats and visitors here – from students and au pairs to journalists and cooks; football and rugby fans to engineers and educators. Some of us have chosen to settle in this Phocean city – as it’s known – with French partners.

Anyone who values authenticity will enjoy this place as it has a willingness to engage with a vibrant culture. Marseille is as idiosyncratic as it is French as the Marseillais march to a different beat to the inhabitants of France’s other cities.

Where do you always bring people when they visit Marseille?

Certain iconic corners – those of postcard renown – are de rigueur: the Old Port divides the town into north and south much as the docklands do in Dublin. It’s the ideal place to get one’s bearings and is presided over by Marseille’s most recognisable symbol, Notre-Dame de la Garde. This Catholic basilica offers a panoramic view of the Couronne des Saints, the name given to the amphitheatre of limestone hills walling off Marseille from the rest of France. It also offers a great view of the islands in the bay including one featuring the Château d’If, which is fictionalised by Alexandre Dumas in The Count of Monte Cristo.

Football and rugby aficionados appreciate being shown the Vélodrome, the home stadium of Olympique de Marseille, or OM as it’s affectionately known. Locals are faithful to OM with a passion equalled only by the most hardcore of GAA counties. The stadium also often plays host to RC Toulonnais for high-profile games. Tickets for either sport can be acquired for lower prices than you can expect to pay in Ireland for similar spectacles.

The top things to do there that don’t cost any money are . . .

Depending on the time of year: swimming in the sea and lounging on the rocks of Malmousque or on the various sandy beaches. While away the time in true Marseille fashion with a game of pétanque (or boules); a popular convivial pastime best shared with friends over repeated glasses of pastis. Pastis is to Provence as Guinness is to Ireland!

Depending on the nature of your equipment: go kayaking and paddleboarding, or on days when the mistral is raging, go surfing at Plage d’Huveaune or kite-flying in the nearby Parc Balnéaire du Prado.

I find running along the Corniche following the progress of the sailing regattas and the Corsica and Algeria-bound ferries arriving and departing deeply satisfying.

Try hiking in the Calanques National Park or, alternatively, exploring the Blue Coast in the north and west beyond L’Estaque.

Simply wandering in the warren of old streets in the Panier, the site of the original Greek colony, is a pleasure, as is the adjacent Fort Saint-Jean, connected by a foot bridge to the Museum of European and Mediterranean civilisations (Mucem), and the Émile Duclaux Park with the best views of the entrance to the port.

Where do you recommend for a great meal that gives a flavour of Marseille?

The signature dish of Marseille is bouillabaisse, a traditional Provençal fish stew. Two of the best bouillabaisse restaurants in town are Le Rhul on the Corniche and Le Miramar on the Vieux Port. But a meal will cost you.

If, like me, you have simpler tastes, then I suggest you try some of the small family run ethnic restaurants of which there are many, offering cuisine from the four corners of the francophone world, reflecting the diverse origins of so many Marseillais. You will find such cuisine all over town, but notably in the vicinity of Noailles (try the couscous) and bohemian Cours Julien.

Before you dine, to get a real feel for this epicurean city, partake of the quintessentially French custom that is the apèritif and order one of two celebrated drinks: pastis or rosé, and snack on some panisse (like the finest chunky chips from your local takeaway but made from chick peas). I recommend Vallon des Auffes, a modish fishing cove that takes its name from alfa, a sort of grass used to make rope, braids, and fishing nets, or Café de l’Abbaye where you can watch the sun set over Fort Saint-Nicolas.

What should people take home?

One might take home a more nuanced impression of this city and its people who are too often maligned, or lampooned by the popular media in France. Its roots run deep – 2,600 years deep – and before it was appropriated by the Kingdom of France in the 15th century, it had had a long history of independence.

Even after this time, Marseille retained a separate administration and regularly rebelled against kings or governments that threatened its liberties. It’s no surprise, then, that the revolutionary marching song later adopted as the national anthem is the Marseillaise.

I watched my dad’s funeral by webcam from France
4