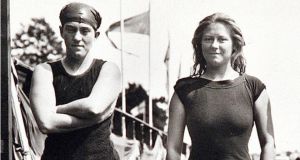 In 1912-18, Fanny Durack broke a total of 12 world records. This success took her on tours of the US in 1918-19, accompanied by fellow Irish-Australian swimmer Mina Wylie.

On July 13th, 1912, a single page of The Irish Times carried two stories of significance in Irish women’s history. One related to the trial of four suffragettes for breaking windows of Dublin’s public buildings. In the next column was a report from the Stockholm Olympics. Irish-Australian Sarah “Fanny” Durack had won the first gold medal in women’s Olympic swimming.

Women participated in the modern Olympic games for the first time in Paris in 1900, when just 19 of the 1,200 competitors were women. Women continue to be under-represented at the games, with the Olympic Council aiming for gender balance in 2020.

Equal votes for women had been won state-by-state in Australia from 1894, thanks to the efforts of suffrage campaigners like Monaghan-born Mary Lee of the South Australian Women’s Suffrage League. However, advances in women’s possibilities to participate in political life did not automatically translate into other areas of Australian life.

Born in Sydney to Irish parents in 1889, Durack won her first state title in 1906, aged 17. At that time, the New South Wales Amateur Swimming Association prohibited women from competitions where men were present. But Durack’s many successes inspired the public, who demanded that she be allowed to compete in the 1912 Olympics in Stockholm.

The Barrier Miner newspaper editorialised, “if there is any athlete in Australasia who should go to the great contests it is this young Sydney swimmer”, and noted, listing her constellation of 56 medals and 100 trophies, “If this formidable array is not a record that Australia should be proud of in one of her daughters, then there is no such thing, as national pride.”

The ban on women competing before male spectators was lifted, and a public appeal raised the funds necessary for Durack to travel to Europe.

In Stockholm, Durack broke the record for the 100 metres freestyle with a time of 19.8 seconds, creating scandal by rejecting a thick, modest woollen swimsuit with “as much drag as a sea-anchor” in favour of a close-fitting suit. She also won gold for the 100 metres, the only individual event for women, beating fellow Irish-Australian Mina Wylie and setting a new record time for the event.

She made a triumphant return to Sydney. When she stepped onto the platform at a Ladies’ Swimming Carnival in February 1913, draped in an “Australasian cloak of green”, spectators burst into applause. Their excitement was rewarded - on this occasion, she broke the world record for the 100-yard crawl. She now held the world record for all distances in women’s swimming, recognised by the International Swimming Federation.

In March 1914, she broke all existing records for swimming a crawl in a mile of open water in 26 minutes 8 seconds, beating the New South Wales’ men’s record by 52 seconds.

In 1912-18, Durack broke a total of 12 world records. This success took her on tours of the US in 1918-19, accompanied by Mina Wylie. But the pair were dogged by controversy and the tours were unsuccessful. Arriving in the US in 1918 without official sanction, they were then banned by the Amateur Swimming Union of Australia.

In 1919, they refused to swim until their manager’s expenses were paid - in response, the USA Amateur Athletic Union threatened to suspend their amateur status. The Union’s position was met with objections from other athletes.

A week before the Australian team were to travel to the 1920 Antwerp Olympics, Durack underwent an appendectomy. Her recovery was marred by typhoid fever and pneumonia, forcing her to withdraw from the competition.

In January 1921, she retired from competitive swimming due to long-term ill-health. Shortly afterwards, she married Bernard Martin Gately, a horse-trainer, and thereafter dedicated herself to coaching children. She died of cancer at her home in March 1956.

A self-taught swimmer, Durack pursued the sport despite an enduring nervousness about the dangers of deep water. She preferred to abstain from swimming rather than to risk ever swimming alone. Nevertheless, together, she and Mina Wylie blazed a trail in the early days of women’s international swimming.

This Extraordinary Emigrants article was written by Angela Byrne, DFAT historian-in-residence at EPIC The Irish Emigration Museum (epicchq.com) in Dublin’s Docklands, an interactive museum that tells the story of how the Irish shaped and influenced the world. Learn about more pioneering Irishwomen at the free exhibition, ‘Blazing a Trail: Lives and Legacies of Irish Diaspora Women’ at Epic, November 12th-25th.