‘My guilt at living 16,000km away is worsening during the pandemic’

Coronavirus: Nicola Holly on the challenges for Irish emigrants worrying about family 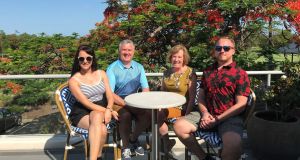 Nicola Holly (L) with her parents (C) and brother (R) in Brisbane in January this year.

I’ve lived on the other side of the world for 10 years, so you would think I’d be used to dealing with not being able to see family and friends daily. Turns out it doesn’t get any easier with time.

I moved to Australia in 2010 with no definitive plan or purpose, and have been extremely fortunate to build a life here surrounded by outstanding friends, great weather and a promising career.

Like most emigrants, the guilt of moving 16,000km abroad has never left me. Every now and again it hits particularly hard. With the current Covid-19 crisis, the guilt I feel about being so far away from family and friends in Ireland has increased tenfold. What used to bring me solace in difficult moments was the knowledge that if anything ever happened, I could jump on a plane and be in Ireland in 24 hours. But now that lifeline has been taken away.

There’s a specific feeling of helplessness when you are on the other side of the world from the people who mean the most to you. I worry about what news I might wake up to in the morning. I, like many other people living abroad in different time zones to “home”, have often felt anxious going to sleep, fretting that if something were to happen during the night, I wouldn’t know about it until the morning.

Australia is home to the third biggest population of Irish immigrants globally, so I’m sure there are a lot of people living here feeling the same. Friends I’ve spoken to here are particularly concerned about elderly relatives, especially those in rural areas of Ireland who are experiencing a new form of isolation. But the Irish have a long-standing history of coming together when times are tough, and this is no different.

So what can I, and the millions of other immigrants in Australia and in other countries around the world, do? I’ve found that reframing the situation and trying not to panic has helped.

People separated by distance have long found ways to maintain connections. Elderly Irish residents I’ve met here in Brisbane have often regaled me with tales of waiting excitedly for months at a time for a single letter from home. I’ve learned lessons from this pandemic and realised the importance of keeping connected with people during these difficult times. I’ve changed my mindset from worrying about the physical distance of my family and friends in Co Kerry, to focusing on the bond I have with them. Keeping regular contact through video, phone calls, messages, and even old school post has helped.

As an immigrant in Australia, I already cherished any time I spent with family and friends in Ireland, but from now on it will become something even more special. I particularly miss how the Irish people embrace our rich and vibrant culture in dealing with a crisis. Irish people tend to lean into music, writing, drama and visual arts. Every time I see a clip from an Irish musician on RTÉ’s The Late Late Show, my heart swells with pride.

I’m extremely thankful that my loved ones at home are healthy, and even though we’re physically separated for the time being, it won’t last forever. Time doesn’t take away from family and friendship – neither does distance.