Irishwoman on how Covid-19 is affecting Luxembourg

Coronavirus: 70% of healthcare workers cross the border daily to work in Luxembourg 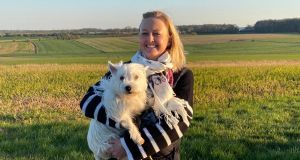 Dubliner Tracey Darlington, who lives in Luxembourg, with her dog.

I grew up in Dublin and moved to Luxembourg with my husband, Keith, 20 years ago. We both work in the financial sector and initially planned to stay a couple of years, but quickly found that the country offered a work and life balance that we couldn’t achieve in Dublin at that time. We made friends quickly, the healthcare and social security system were excellent, and then came the opportunity for our two children to speak many languages (Luxembourgish, German, French and English) and embrace a mix of cultures. I’ve found it to be an egalitarian and socially conscious society.

Typically, it has colder winters and warmer summers than Ireland. People enjoy the outdoors despite being a landlocked nation. However, since coronavirus and the restrictions that have been imposed to stop the spread, the atmosphere is more subdued. Only the essential stores are open, and the roads eerily quiet.

Luxembourg can be quite a little policed state at the best of times, which is fine if you follow the rules. There are rules such as not leaving your engine running and not being allowed to cut the grass or work on loud DIY projects on a Sunday. Generally, people are quite compliant and tend to follow the rules, even if the rules are not liked. As such, I don’t believe the authorities were met with much resistance when the lockdown was imposed here.

Since the restrictions began, the police are more prevalent with officers stopping us to ask people where they are going, or why there is more than one adult in a car. Only one adult from a household is allowed in the supermarket, and most supermarkets are no longer accepting cash.

As of Thursday, the Grand Duchy of Luxembourg reported more than 3,000 confirmed cases of Covid-19 and 52 deaths. For a nation with a population of just 600,000, the number of deaths is a sobering statistic. On a positive note, our testing rate is high, similar to Iceland. Temporary medical facilities have been constructed and Luxembourg has taken patients from the hard-hit Grand-Est region of France for treatment.

Luxembourg watched from afar, like many other European nations, as the coronavirus started to spread from January. The first cases in Luxembourg emerged at the end of February when people returned from half-term holidays, many having holidayed in Italian and Austrian ski resorts.

I feel that the Luxembourg government reacted strongly and decisively quite early on. Pubs, restaurants, gyms, hairdressers, beauty salons and clothes shops, all closed more or less at the same time as the schools (the weekend of March 14th). Other non-essential services and construction sites closed some days later.

On St Patrick’s Day we too had a speech from our prime minister Xavier Bettel. He declared a state of emergency (and it seems surreal to even type those words) of up to three months. In essence, the government continues to function, the borders are being monitored, but there is no guarantee that they will remain open if the curve of infections doesn’t flatten out.

Currently “frontaliers” (or cross-border workers), on whom the Luxembourg economy relies on heavily must carry a certificate at all times, which includes details of their home address and employer. Luxembourg is in the heart of Europe and more than 180,000 people cross the border every day from France, Germany and Belgium to work. A staggering 70 per cent of our healthcare workers are frontaliers.

People are advised drive to their local supermarket

The prime minister’s message was clear: stay at home and avoid social contact. He advised against meeting up with friends for walks or social events, despite the arrival of the long-awaited fine weather. Failure to comply with certain measures can carry fines of up to €100,000 or imprisonment. Playgrounds and parks were closed immediately. For the first few days of the new restrictions some were cordoned off to the extent they looked like a crime scene.we have lots of cycle and walking tracks

The exceptions to avoiding social contact are similar to that in other countries - professional commitments, urgent medical appointments, grocery shopping. People are advised drive to their local supermarket. Walking and running is allowed with household members but in open spaces and keeping the 2m distance from other. Fortunately, Luxembourg is 30 per cent forested so we have lots of cycle and walking tracks, and no shortage of open areas. We are not (yet) subject to a kilometre restriction in the way that Ireland is limited to 2km. So, we walk, we run, we cycle.

The novelty of distance-learning two children who are in different school systems, in three languages (English, French and German) while both my husband and I are working from home has most definitely worn off. The only “person” that is loving the close proximity is the dog.

The children had what seemed like huge amounts of work the first three weeks of lockdown. It was hard to work full-time and make sure the school work was covered. Teachers have no rule book either for the situation at the moment and they’re doing their best too. We know that the schools will be closed until at least May 4th, but many people don’t expect the schools to reopen until September. The government has recently said they hope to announce, in the middle of April, some gradual reintroduction measures but no other details have been given yet.

I do feel sorry for my children as they cannot even come to the shops so they’ve hardly seen anyone, except for the odd neighbour, since March 15th. Now that the Easter holidays have begun, they do take to the fields (that have walkways through them) on their bikes and skateboards.

They go from stressing out over the number of cases internally within Luxembourg and worldwide, to excitement when they see the numbers of new cases decrease in Luxembourg. They go from boredom and states of inertia, to bursts of energy. They are also worried for their grandparents living in Dublin, hoping they stay safe.

As a family we remind each other daily that all our restrictions are first world problems. We recognise the sacrifices being made by frontline workers every day - doctors, nurses, pharmacists, shop assistants, rubbish collectors, people making deliveries of supplies and post, and more. In the meantime we watch, wait, read and listen, and hope.