Irishman in Beijing: Some Chinese view foreigners like me as bringers of disease

‘Despite moments of suspicion, most people treat me with the same friendly curiosity’ 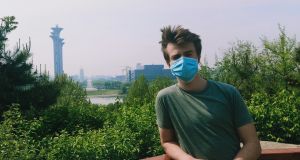 Fionn Clifford is studying and living in Beijing.

Fionn Clifford’s family first moved from Ireland to Beijing when he was 11 years old. He attended middle and high school in the city, and is now studying the University of International Business and Economics. He has previously written about his experience of settling in after moving to Beijing

It’s springtime in Beijing. Crowds of cheerful suburbanite families flock to the Olympic Park, a legacy of the 2008 games, to relish the all too rare unpolluted weather. But this is no normal spring.

Every man, woman, and child in this park is wearing blue surgical masks. These masks were never intended to protect against Covid-19, or any other disease, but to prevent water droplets from spreading from doctor to patient. But you are unlikely to be allowed into any park, mall or even your own residential area without them.

The first thing you see when you enter the park is a red propaganda banner suspended from two trees. It reads “Firm faith, we are all in the same boat”. Other slogans include “Don’t spread rumours. Believe in science. Have no fear”. These banners have always been a common sight in the city, but instead of carrying the usual pro-party phrases, they now promote unity and conformity in the face of the coronavirus pandemic.

University students, such as myself, have had all classes go online since the end of the Chinese new year, in January, so I’ve moved back in with my parents, who also live in the city, rather than staying in my empty dormitory building. For the first time since high school I’m living with my mum and dad, experiencing all the joys and frustrations that come with being close to family. I have skilfully avoided nagging by learning how to cook, and although our apartment’s kitchen now smells like a street-food stall, it’s good to know I will come out of this strange period with something resembling a new skill.

As of April 21st, Beijing has reported 593 confirmed cases of Covie-19 and eight deaths from the virus. This is far less than Ireland, despite the city having a much bigger population.

As the city comes back to life, with more shops opening, an increase of cars on the roads and higher numbers of people willing to leave their house for non-essential reasons, fears of a second wave are emerging.

As new cases in China plummeted, the few coronavirus cases that continued to emerge were people who had come back from abroad. The government first introduced a 14-day quarantine at designated hotels for all overseas arrivals and then added a total ban on foreign nationals entering the country.

My girlfriend, along with most of my foreign classmates, left during the Chinese new year holidays and now find themselves unable to come back. Foreigners in China are now seen by some as bringers of disease, and there have been moments when people seem to have been unusually eager to practise social distancing from me when I go shopping for groceries.

Despite these odd moments of suspicion, most people treat me with the same friendly curiosity as before. I recently showed the compound guard my entrance identification and he asked where I was from, and then he asked whether Northern Ireland was part of the UK. I said yes and he responded, “Ah, England still won’t let it go, huh?” – I simply replied it’s complicated. I’ve no idea the amount of times I have had this exact conversation with cheerful middle-aged Chinese people –  some things don’t change.