My advice to young emigrants? Go boldly, don’t look back

Niall O’Dowd almost returned to Ireland in 1985. Staying was the best decision of his life 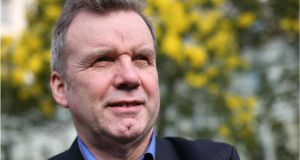 A summer long ago, 1985 to be exact, I found myself making the most important decision of my life.

I had lived in California for seven years but had become fretful. San Francisco seemed like an eternal holiday; one gorgeous day after another until they all melded in like a permanent golden landscape. But the gloss had come off it.

I wanted something grittier and real, somewhere with seasons, intense activity, not all this laid-back stuff. I also wanted to be closer to home in Ireland; an aging mother and new nephews and nieces to enjoy were a powerful attraction.

So it was New York or Dublin, a new chapter or a road not taken to wonder about for the rest of my life.

Dublin was the easier choice. A deep friendship with Irish Press editor Tim Pat Coogan would likely have meant a job. I had not a single connection in New York, but possessed a young man’s optimism that it would be alright on the night.

My relationship with Ireland has changed enormously over the years. The anger has long gone.

I remember the day I choose New York like it was yesterday. Damp days were rare in San Francisco, and I sat huddled in my rented house in the Sunset District. I spread out a map of New York, and tracing the outlines of the five boroughs, my finger, as if magically drawn to it, hovered over Manhattan.

A rush of blood ensued, followed by a call to a cheap hotel in New York. A plane ticket for two weeks’ time was bought. The deed was done.

In my other life, I went home and was working for the Irish Press. I would have become embroiled in the slow death of a wonderful institution, where I had got my start as their American correspondent. It is gone forever now.

I would have found work in some other publication and attempted a non-fiction writing career, probably drank too much and ended up like so many of my cohort, unfulfilled, running into a midlife career blockage and destined to rise no further. At least that is how I imagine it.

Of course, I would have been there for my mother’s final years, and struck up a much closer relationship with my nephews and nieces.

Later in New York, I met the Irish banker Bill Burke, a legendary figure, and told him of a plan to start an Irish American magazine based on an Italian magazine I admired called Attenzione. The owner of the Irish Post in London, Brendan Mac Lua, recognised the vision and jumped on board. Irish America magazine was founded three months later and thrives today. It was followed by Irish Voice newspaper, and IrishCentral.com.

My relationship with Ireland has changed enormously over the years. The anger has long gone. The church scandals, the vote for gay marriage and legal abortion, the Peace Process in the North, have long erased my belief that nothing would ever change. In fact, I cannot think of a country in the world that has changed more. It was encapsulated in a joke a friend told that given Donald Trump’s determination to end Roe versus Wade, the 1973 ruling which decriminalised access to abortion in America, Americans might be coming to Ireland for abortions.

The GAA is the one untouchable institution which never foundered. The miracle of watching a match live from 5,000km away is deeply appreciated by someone who used to have to drive 13km just to get radio commentary. I remember driving a round trip of 160km to an Irish pub in the Catskills from Saratoga Springs where I was on vacation, to watch the All Ireland hurling semi-final . Now GAA Go is on my laptop wherever I am.

The road not taken probably would have been fine too, but taking the hard road by staying in America has made me a far better person, I believe. The biggest moment of my life, which would never have happened if I had moved back to Ireland all those years ago, was introducing my mother to Bill and Hillary Clinton at the White House. “An rud is anamh is iontach” - “What is rare is wonderful.”

To those thinking of leaving Ireland I say don’t look back, but step out boldly and immerse yourself in the new culture wherever it is. Keep the things of home close by.

Your relationship with Ireland will be complicated. The diaspora is looked upon with mixed feeling by many Irish, unlike the Jewish diaspora which is a seamless garment. The worldwide footprint Ireland has is from that diaspora. Without them, Ireland would be just the first large rock in the ocean between America and Europe.

Go boldly if you go. My old English professor at UCD Alan Bliss said it best that whenever making tough decisions , “Whatever happens is the right thing to happen.” That’s a lesson for life, not just emigration.

I took the road less travelled and that “has made all the difference”, as Robert Frost wrote. I have no complaints.

Cadaver skin and plastic surgery: How the White Island survivors are being treated
Real news has value SUBSCRIBE