How we became truckers and got paid to see America

Yvonne O’Connor traded in a gift shop job for a life on the road, clocking up 1.2 million kms 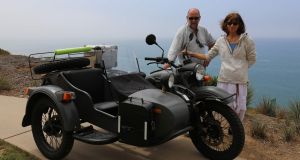 Yvonne O’Connor and her husband have been travelling by motorbike around America and Central America for the past seven months.

In 1986 I chased my man across the Atlantic. Well, that’s how my mother put it at least. He made my journey worthwhile by meeting me at LAX airport in a limo. It was during the worst drought in California in years and the heat, traffic and noise were overwhelming. It took a long time to get used to it.

We began our American life together in the San Fernando Valley, and I got a job in a gift shop in Bel Air. Helping rich housewives choose personalised gifts for people who didn’t need them was a push into the deep end of the Los Angeles pool and all its craziness. I went home every night and asked Fran: “Is it them, or is it just me?”

One of the nicest regulars was a very pretty girl called Kris. I always remembered her because she had an unusual name. About two years ago I was sitting in the dentist’s office and saw her in a magazine, no longer Mrs Kardashian, she’s now Mrs Jenner. I always was a bit behind the times.

As we morphed into adulthood together, w e bought a house, then a ring, and later had two weddings. The first was in the Little Chapel of the West in Las Vegas, followed by a slightly classier version at Slane Castle.

I had the usual office jobs until Fran persuaded me to pack it in for a life on the road. We went to Debbie Dootson Trucking School every night for two weeks. It was the hardest thing I’ve ever done. After signing up as a team with a company called Mayflower Transit in Indianapolis, we bought a big truck. For more than five years we drove through every state in the continental US, and sometimes into Canada. We got paid to see America, racking up three-quarters of a million miles while doing it.

When showering in truck stops and eating out of tins lost its appeal, we traded in Route 66 for a more regular commute back in Los Angeles. Our madness limited itself to holidays in far-flung places like Mongolia and Libya.

Eventually the great persuader - aka my husband - started talking about a “Road Trip Redux”. This one made the truck look like a penthouse at the Ritz. We handed in our resignations, rented out our house, and bought a Ural motorcycle and sidecar. Everything that didn’t fit in a 5x5 storage unit was sold or given away. For clothes I was allowed three of everything. By the time I left our little house by the sea, I was too exhausted to cry.

On September 5th, 2017 we drove a grossly overloaded Ural into Death Valley and kept going. We travelled north to Washington, and in October crossed from Montana, through Canada, to Massachusetts.

Family and friends were visited along the way, anyone who had a bed and a laundry room. I had my teeth cleaned by a woman named Scarlett O’Hara in Charlotte, and we continued south to Florida for Christmas. What a great state; if you’re short of holiday cash you can pawn your rings and buy a gun all in the same mini mall.

After donating our winter clothes it snowed, and the long-awaited Gulf Coast Highway brought long stretches of ice and freezing rain. It didn’t warm up until we crossed the border at Presidio, Texas into Chihuahua.

We’ve been travelling in Mexico for seven months now. Apart from a detour to the Pacific coast, we stayed on the central route. The towns in the north were not always pretty, but they did land us in the middle of everyday life. Hardly anyone spoke English, and there hadn’t been time to learn Spanish before we left. Apart from Mazatlan and Merida, there have been few tourists, almost none north of Zacatecas.

Along the way we’ve been adopted by various motorcycle clubs. In Mexico if you love bikes you join a club, whether you’re driving a Harley or a Honda 50. We got escorted through barrios and welcomed into homes. Strangers guide when we are lost, and neighbours teach the gentle art of buying an avocado to eat the day after tomorrow.

We’ve received advice on routes to take and roads to avoid, and why we should never, ever drive after dark. Mothers hug, fathers cook and dogs wearing waistcoats are remarkably polite. We’ve visited restaurants that don’t look like restaurants and eaten food that didn’t look like food. Worse, we’ve embarrassed ourselves by asking the egg and cheese man for half a dozen Thursdays.

The bike is a big hit; we’re only along for the ride. Everywhere people stare. Cops wave, the army flash white smiles, and roadblock police take photos. At the Belize-Guatemala border, Fran gave a camouflaged soldier a driving lesson.

Mexico isn’t like people say it is, and it’s not like you imagine. It’s grittier, it’s poorer, it’s louder and it’s better. We’ll wander here till year-end, before crossing into Central America. The long term goal is Tierra del Fuego, the archipelago off the southernmost tip of South America. After that who knows, east, west, north again, or the divorce court?

It would be tempting to put down roots but I’d get tired of eating tortillas, and South America has always beckoned. Besides, it’s never a good idea to put all your Thursdays in one basket.

Older people on isolation: ‘I have plenty of food but not much appetite’
Real news has value SUBSCRIBE