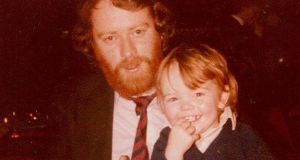 John O’Brien (right) with his father Derry, who died in Cork in January.

I’m finally through security in Glasgow Airport en route to Cork, and I noticed I’ve a few missed calls from my mother. We’ve been calling and missing each other all day, and I try to ring her back but no answer as usual.

This last week, every time the phone rings or I get a message alert, I have to steel myself before unlocking my phone. This next call could be it, he has been unwell a long time but in these last few days he hasn’t bounced back from a recent trip to the Cork University Hospital like they were hoping. My father is dying, the estimated six to 12-month time scale floated only a few days ago has been reduced to hours now, 48 at the most, less than 24 more likely.

I’m standing outside the WH Smith’s when my brother rings. I answer and before he says anything, I know. I can hear the crack in his voice. I’m too late. All the rushing around I’ve done in the last few hours, all the tension I’ve felt lifts and in a strange way is released; the urgency of getting back to Cork is gone.

He’s gone. I didn’t make it. The death notice now won’t say “surrounded by his loving family”. I wasn’t fast enough. Even had I made it back before he died, it still would’ve been far too late. Who he was, was long gone by now.

It’s strange, but that moment was the first time in over 12 years of living abroad that I’ve really and truly felt like an emigrant. Even during the six years I spent in Canada, thousands of miles and several time zones away from home, I never felt as removed as I did right at that moment.

I was alone in the airport; behind those security barriers I’d just passed through, across the Clyde, my partner was at home with our children. We couldn’t afford the airfare back for all of us at such short notice, and anyway we were told he had months to live just days ago. This was also the fourth time I’d flown back specifically to bury him in the last two years. I had even left behind a suit in the family home for the... inevitable.

Airports are strange, almost liminal places. When you’re in one, you’re not really anywhere until you arrive at your destination. After the call, I wanted to maintain my composure, the last thing I wanted was to break down in this non-place surrounded by strangers, so I focused on where I was and thought about all the emigrants before me, who’ve gone through this exact same process both in the distant and recent past.

The phone call after the cancer diagnosis, the heart attack, or the stroke in our case; being reassured that the doctors were doing everything, that they’d make it; the Skype calls to the hospital bed, seeing their slow recovery in weekly instalments on a laptop on weekends; the first visit back after hearing the news, the hugs are tighter and last longer; the unspoken “that was a close one...” brushed off with a loud “you’re on the mend now, sure, you’ll be around another 20 years!”

Steps on a stairs

My father’s first stroke was eight years ago, followed by a second which he also survived but was left in a lot of pain. Just over two years ago he was diagnosed with Lewy Body Dementia. He’d been acting erratically for a while but given that he was a larger than life character, his behaviour was dismissed as just him being him, but I suspect he was battling LBD far longer than we knew.

Skype calls home change, you let the children wander out of the room before asking how the patient is doing, you begin talking about the person in the past tense, because in truth the person’s mind is long gone well before their body gives up. Even so, you still rush home to be with them at the end.

That’s how it is for those of us abroad. Rarely there at the end, but we’ve done that “final goodbye” dozens of times beforehand. A dress rehearsal for a play we’ll likely never participate in. Understudy to the siblings who never left. Waylaid between places, like my father had been these last two years, and like I am now, standing outside the WH Smith’s, finally through security in Glasgow Airport.

Resilience: ‘Does anyone know what this word actually means?’
Real news has value SUBSCRIBE