The Irish-Jewish music stars of the Tin Pan Alley years 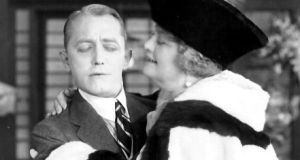 To celebrate Heritage Week, we’re focusing on this year’s theme of “past times” - reflecting on the popular culture which came from the movement of Irish people to the Great Melting Pot of New York in the 19th century.

Before the mass production of gramophones, a favourite pastime was to gather around the piano for the playing of “parlour tunes”. A collection of sheet music publishing businesses who catered for this craze gathered around West 28th Street in Manhattan from around 1885. The area would come to be known as Tin Pan Alley.

Some of the major Tin Pan Alley songwriting parings were Irish and Jewish, and credit is due to musician and folklorist Mick Moloney who has explored this phenomenon in detail in a talk at Glucksman Ireland House at NYU. Here are a few of the fascinating personalities and partnerships who helped to write the Great American Song Book.

Although the name Cohan might suggest Jewish ancestry, it’s actually from the Irish Keohane. Cohan spent his early years touring with his parent’s vaudevillian troupe, The Four Cohans, before striking out on his own as a songwriter, dancer, playwright, and actor. His establishment on Broadway came about through his partnership with Jewish producer Sam H Harris, with whom he would create 18 Broadway musicals between 1904 and 1919.

Cohan is remembered for a number of hit songs including the first World War march song Over There sung by Nora Bayes. This song would earn him a Congressional Gold Medal from US president Franklin D Roosevelt for morale-building in a time of war.

Temperamental as a young man, he later gained a reputation for generosity with the large fortune he’d amassed through Broadway shows and astute royalty agreements. He lived to see James Cagney play him in the film retrospective of his life, Yankee Doodle Dandy, in 1942 reportedly saying: “My God, what an act to follow!” When he died of abdominal cancer soon afterwards, tributes poured in from across the nation. Perhaps the most apt was from mayor LaGuardia of New York who said of him that he put “the symbols of American life into American music”.

Although Bayes is remembered for the richly-brogued version of Has Anybody Here Seen Kelly? released in 1910, some clues to her origins are included in the 1910 recording. At one point, Bayes sings “Has anybody here seen Levi…I mean Kelly!” - a reference to Bayes’ own Jewish background (she was born Rachel Eleanora Goldberg to Orthodox Jewish parents in Chicago in 1880). The song itself had been adapted to meet the contemporary craze for all things Irish. Kelly was originally written about a holidaymaker from the Isle of Man, as Kelly was the most common surname there at the time. Initially performed in British music halls, it was adapted when it arrived stateside.

After debuting as part of Ziegfeld’s Follies in 1908 with first husband Jack Norworth, singing his song Shine on Harvest Moon, she embarked on a successful career recording popular parlor songs, including Norworth’s famous Take Me Out to the Ball Game. Bayes partnered with George M Cohan on the ubiquitous Over There in 1917. She performed regularly for the troops before her untimely death of cancer at the age of 47.

William Jerome, born William Jerome Flannery in New York in 1895, and Jean Schwartz, born in Budapest in 1878, were one of the most successful lyricist/composer pairings of the Tin Pan Alley era. Like many of the artists mentioned above, they cut their teeth writing minstrel songs - a legacy of that time and culture that shouldn’t be overlooked. African Americans were excluded, largely, from the chance to share their own culture, and though Tin Pan Alley ragtime was influenced by African American composers like Scott Joplin, the songs were written and performed in blackface. These songs would start to garner criticism for their racism at the turn of the century, and songwriters like Jerome and Schwartz changed tack.

The chief reason to speak of them here is their popular song, If It Wasn’t for the Irish and the Jews, a song that at once embraces stereotypes and recognises the opportunity, diversity and convenience offered by the co-mingling of cultures:

“What would this great Yankee nation

Really, really ever do?

If it wasn’t for a Levy

Where would we get our policemen?

Why Uncle Sam would have the blues.

Without the Pats and Isadores

You’d have no big department stores.

If it wasn’t for the Irish and the Jews.”

Although these parlor songs often parroted the bigotry of the day, they also helped pave the way for the creation of a nation proud of its diverse roots. As friends and families gathered around pianos at the beginning of the 20th century, they had a chance to see their own lives reflected back at them.

This Extraordinary Emigrants article was written by Jessica Traynor, deputy museum director of EPIC The Irish Emigration Museum in Dublin’s Docklands, an interactive museum that tells the story of how the Irish shaped and influenced the world. For a schedule of EPIC’s Heritage Week events visit epicchq.com

Michael Harding: Though I cheered for Biden, I was more like Trump than I could admit
5