Irish 'breeder' girls sent to Australia during Famine to be honoured 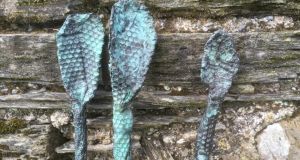 The story of 110 teenage girls sent in 1848 from Skibbereen to Australia will be recalled in a bronze sculpture of 110 spoons by artist Toma McCullim.

On leaving their famine-ravaged home town, each girl received two dresses, two petticoats, five pairs of stockings, two pairs of shoes, a bible, a bowl and a spoon.

This summer, the poignant story of 110 teenage girls sent in 1848 from the devastation of a starving Skibbereen to Australia – where they were referred to as “breeders” – will be recalled in a bronze sculpture and a large piece of Australian sandstone in the West Cork town.

“This is a story of bravery, the bravery of women; it is a story of heroines,” says Skibbereen-based artist Toma McCullim. The girls from the Skibbereen Union Workhouse were despatched to Australia to provide labour, marry, have children and help colonise the sprawling continent.

It’s uncertain how much choice, if any, they had in their departure, the artist says. At the time, 60 people a day were dying in the Skibbereen workhouse, which was rife with disease and hunger.

The 110 were essentially “farmed”, says the artist with Uillinn, the West Cork Arts Centre, who has been the driving force behind the year-long 110 Skibbereen Girls public art project.

The 110 girls departed for Australia under the Earl Grey Famine Orphan Scheme, named after the colonial secretary who enacted it

In documentation she studied as part of her research through residencies at Uillinn, West Cork Arts Centre in Skibbereen and at the site of Skibbereen Workhouse, now Skibbereen Community Hospital Campus, the girls were referred to as “breeders”.

The residencies allowed McCullim to carry out research and support a variety of tours, talks, film screenings and participatory workshops on the theme of the 110 girls and their journey to Australia.

The 110 girls departed for Australia under the Earl Grey Famine Orphan Scheme, named after the colonial secretary who enacted it.

This scheme had two aims: to reduce overcrowding in Irish workhouses through an assisted emigration scheme; and to send female immigrants to settle in Australia where at the time there were nine men for every woman.

The board of guardians in every union in Ireland put forward the names of suitable girls aged 14-18. An estimated 4,000 girls left the country under the scheme. Skibbereen Workhouse offered the most girls outside Dublin. There are believed to be in the region of 10,000 descendants of the young Skibbereen emigrants.

Although the girls did not have to be orphans to be eligible for the scheme, it was stipulated that they were not to be living with their families, be of good character, unmarried and without children so that there would be no impediment to marrying Australian settlers.

“Many of them did better in Australia than they could have done in the prevailing conditions in Ireland at the time,” says McCullim.

At least two descendants are expected to make the journey to Skibbereen next month for a special ceremony honouring their ancestors’ story.

One hundred and 10 bronze spoons have been cast by McCullim from beeswax moulds created by staff and residents at the Skibbereen Community Hospital complex, formerly the workhouse.

Throughout this month, the spoons will be embedded in the archway above what used to be the workhouse’s Women’s Entrance, near the site’s famine burial ground.

The ceremony will take place the day after the prestigious Coming Home: Art and the Great Hunger exhibition of historical and contemporary artwork from Ireland’s Great Hunger Museum, Quinnipiac University in the US state of Connecticut, opens in Uillinn, the West Cork Arts Centre in Skibbereen.

The exhibition is on display in Dublin Castle