TDs who delayed drink-driving legislation ‘have cross to bear’ 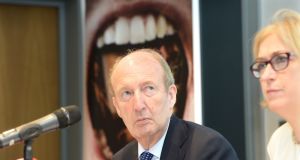 Minister for Transport Shane Ross criticised the filibustering from a handful of TDs that delayed the new law and suggested the delays had cost lives. Photograph: Dara Mac Dónaill / The Irish Times

TDs who delayed legislation on drink driving have a cross to bear “ for the rest of their lives”, Minister for Transport Shane Ross has said.

Speaking at the launch of a report from the Road Safety Authority, the Minister criticised the filibustering from a handful of TDs that delayed the new law and suggested the delays had cost lives.

While he stopped short of apportioning blame for road deaths on any of the TDs he accused of stalling the passage of the legislation, he said the delays were “a terrible thing” and a “cross for them to bear for the rest of their lives”.

The Minister was speaking as the Road Safety Authority (RSA) and the Garda Síochána published a provisional review of road fatalities for the first half of 2018 showing that 78 people had died on Irish roads in 73 collisions to the end of June.

The mid-year review showed that 39 drivers, 12 passengers, 18 pedestrians, three motorcyclists and six cyclists died on the roads to the end of June with April and June proving to be the worst months for road fatalities with 17 deaths in each month.

“The statistics revealed today are disappointing,” Mr Ross said. “After seeing a reduction of 11 per cent in the first half of 2017, that positive trend has been reversed in 2018. It shows the absolute need for ongoing vigilance by road users, a greater level of visible Garda presence on our roads and robust traffic legislation on our statute books.”

He said the passage of the Road Traffic (Amendment) Bill 2017 through the Dáil was a critical piece of legislation aimed at “that small cohort of drivers who continue to engage in risky behaviour”.

The chief executive of the RSA Moyagh Murdock said the statistics showed that was the “behaviour of road users on rural roads, our local roads which poses the greatest danger to people”.

“ In particular, I would remind people of the dangers of driving under the influence of alcohol or drugs. It is no longer acceptable in society to drink or take drugs and drive at any time of the year.”

He said no one had the right to put other people’s safety and lives in danger through their selfish actions. “The members of the Roads Policing Unit will continue over the second half of 2018 to target high-risk drivers in order to make the roads safer for all.”

The highest number of fatalities among road users occurred in Cork, with 11 deaths, followed by Tipperary with seven and Dublin with six. Leitrim was the only county not to record a fatality in the first half of the year.