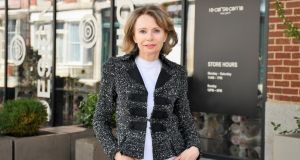 Maura Kelly: “I was always drawn to Kerry and going from knowing Irish people socially to working with them and collaborating has been a great milestone for me.”

New York Emmy Award-winning producer, programme leader and non-profit consultant Maura Kelly moved to the US from Killarney when she was just seven years old.

“I arrived here as a child from Kerry with my entire family. Never in my wildest dreams did I think I’d have such an all-encompassing life here, visiting every state from Washington to Florida, working in television and women’s advocacy groups and still loving New York after all these years.”

Kelly says her family ran a business in Killarney and, as the economy changed, they moved to New York to the garment district in Manhattan to work in the rag trade. “We used to go back to Ireland every year, to maintain a strong bond. It was very important for my family that we have strong roots in Ireland.”

After finishing her initial studies in writing and communications at the NYU school of professional studies, Kelly completed a masters degree in communications, arts and media at the New York Institute of Technology.

A stint on Wall Street in the 1980s followed, before Kelly worked with PBS – the Public Broadcasting Service, which has stations all around the country. “It’s the equivalent of the BBC in the UK, which doesn’t have any advertising, unlike other US TV channels.”

“I worked in the New York office – WNET – where I was recruited to produce programming, spearhead financing efforts and partnerships and manage distribution deals. I was like a mini agency. I brought in funding, learned to create a media product and then built the shows.

“I wore a number of hats. Over the 15 years, I generated $20 million worth of funding, working across the US on many TV shows. It was a great experience, and was to pretty much set me up for the rest of my career to date.”

Highlights included producing In the Mix: The New Normal, a TV special on the aftermath of 9/11, and winning Emmys for The Internet in Action, What’s Up in the Environment? and Fleetweek.

After leaving the channel, she decided to branch out into consultancy and advocacy work. “I worked as a special events consultant with top-tier media companies, such as the Jim Henson Co, Scholastic and the Tribeca Film Institute and festival. “

As principal of Purple Mountain Media, a role she took on in 2008, she has helped creators and entrepreneurs develop and launch media products and cultural initiatives.

“Working as an advocate of gender equality and economic empowerment is hugely rewarding and significant,” she says. “So one minute I’m providing start-ups with creative and strategic direction, while other times I’m working on non-profits. It’s exciting.”

Kelly also works with a Stem-based non-profit body for underserved girls in the Bronx while she has also being elected to be the board of directors of NY Women in Film and TV for three years.

Kelly works with a cross-section of women, from those who are stuck in a mid-career rut or just starting out in the world of work. “I’m thankful so many platforms exist where we can collaborate and make things brighter.

“After being involved in the entertainment business, I love to focus on social enterprise. I still do start-up ventures, but I enjoy building on collaborations. I like coming up with ideas, and having one foot in the media and the other in non-profits.”

Kelly also cherishes her director role of the LEAP Women’s Leadership Programme, where she manages the grant funding and budget/reporting activities. “It’s part of the Irish Business Network, which connects entrepreneurs and business leaders globally. We collaborate with partners and agencies securing government grants for the women’s leadership and CSR programmes.”

But, she says, she has always kept a close eye on Ireland. “In a bid to maintain close contacts, I collaborated with Tall Films in Dublin and worked on small festivals, also speaking at events in Ireland.”

Kelly was “thrilled’’ to be asked to be a keynote speaker at the Gathering Ireland NY 2017 (Transatlantic Arts Festival) and to be a panellist and judge at International Kerry Film Festival 2017.

“I felt as though I had gone full circle. I was always drawn to Kerry and going from knowing Irish people socially to working with them and collaborating has been a great milestone for me and has added a new dimension to things. In the coming years, I plan on continuing this work in Ireland and with government-backed projects in NYC,” she says.

Kelly says the virus has affected her business like any other.

“Webinars aren’t the same as networking events and face-to-face meetings. Things have been pushed back, but New York is an amazing city and it will rise again.”

Despite recent restrictions Kelly says the Big Apple has provided her with an incredible career and lasting friendships.

“New York enables that kind of diversity within your work portfolio. You can do many things here and you can work with so many eager and talented people. The pool is endless.

“Living in New York is energising and you get a great entrepreneurial mindset,” she says.

But she warns people thinking of starting a life there of being too broad. “Things happen in New York, but you need to specialise. You need to be good at one thing here if you want to make it work – or preferably be really good at a few things. Don’t be too vague. Pure talent only works with tenacity. You need both to survive. Once things get into full swing again, the rat race will start over and you want to be ready.”

After so many decades, New York is Kelly’s home and always will be, she says. “But I do love coming back to Ireland, and I miss beautiful Kerry in this socially distanced age. In the meantime, I’ll enjoy the parks, and the energy this city offers until I go back”

‘To die of love’: The 1968 sex scandal that still fascinates France
5