Positives from the pandemic for the workplace 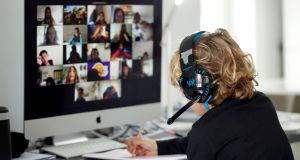 Because of video conferencing, executives are getting more frequent and greater exposure to employees than ever before. Photograph: Albert Gea/Reuters

In mid-March, Deloitte’s global chief executive Punit Renjen wrote a piece in Deloitte Insights about resilient leadership in the face of Covid-19. He identified five qualities he believes will get companies through the pandemic, such as aiming for speed over elegance and embracing the long view, but top of his list is managing in a way that could best be summed up as thinking with the heart as well as with the head.

“In crisis, the hardest things can be the softest things,” he says. “Resilient leaders are genuinely, sincerely empathetic, walking compassionately in the shoes of employees, customers and their broader ecosystems. Yet resilient leaders must simultaneously take a hard, rational line to protect financial performance from the invariable softness that accompanies such disruptions.

“An essential focus in a crisis is to recognise the impact the uncertainty is having on the people that drive the organisation,” Renjen adds. “At such times, emotional intelligence is critical.

“In everything they do during a crisis, resilient leaders express empathy and compassion for the human side of the upheaval – for example, acknowledging how radically their employees’ personal priorities have shifted away from work to being concerned about family health, accommodating extended school closures, and absorbing the human angst of life-threatening uncertainty. Resilient leaders also encourage their people to adopt a calm and methodical approach to whatever happens next.”

For many managers, especially those who have never managed through a major crisis before, Covid has tested their ability to do the right thing by employees while keeping their business on track.

But despite being in unfamiliar territory and on constantly shifting ground, most Irish companies have coped well with the challenges and some positive trends have emerged from the disruption according to Mary Connaughton, director of CIPD Ireland, the professional body representing those working in HR and people development.

“Leadership has become more democratised as the ways in which organisations work have got flattened. Chief executives are only one voice on a Zoom call so colleagues are more empowered and teams have been allowed to make more decisions,” she says.

With no corporate travel and video conferencing levelling the pitch, Connaughton says C-suite executives are getting more frequent and greater exposure to employees than ever before. Meetings that might have happened monthly because people were out of the office are now taking place weekly or even daily.

Video conferencing also makes it easier to include more people in meetings and Connaughton says this is helping to further democratise the chain of command.

“Once you’re in a virtual world, the whole nature of communications changes,” she says. “It’s as easy to catch up with 60 people as it is with six, so there’s more scope for input and engagement than in the past.

“Before Covid, we were seeing an increase in employees asking for flexible working but it was not happening in reality. That’s changed now and with it comes the opportunity to do things differently, to consider what a virtual office might look like and how and where work gets done to best advantage.

“One of the other knock-on effects of Covid is that it’s raising questions about managing talent,” she adds. “In the past, it was automatically assumed that someone had to relocate for a job because they had to live near where they worked. Covid has certainly rewritten that part of the rule book.”

The second potential win from the lockdown is a better climate of trust now that leaders have less direct control over their people.

Increasing trust is worthwhile because it brings positive outcomes such as improved job satisfaction and better performance. Stress levels in high-trust companies also tend to be lower and people are generally happier – qualities that should not be underestimated now that Covid-related anxiety is running high and many employees are putting in long hours under difficult circumstances.

“Employees in high-trust organisations are more productive, have more energy at work, collaborate better with their colleagues and stay with their employers longer than people working at low-trust companies,” says Paul Zak, author of Trust Factor: the Science of Creating High-Performance Companies. “Ultimately, you cultivate trust by setting a clear direction, giving people what they need to see it through and getting out of their way.”

The third win from flattened corporate structures is that organisations have become less political by virtue of the fact that cliques can no longer congregate for groupthink around the water cooler and individuals can’t slip slyly into their manager’s office to argue their case.

With the interpersonal element removed, decision-making supposedly gets better because it’s based more on available facts and evidence than on office politics or capitulating to the will of whoever shouts the loudest.

“Organisations have definitely become more people-centric during the uncertainty created by the pandemic and, as a result, employees have more power and are more central to the decisions being taken,” Connaughton says. “This has brought its own challenges for leaders who have found themselves having to manage in a very different way, especially if they’re used to being out of the office a lot.

“Executive coaching is definitely being dialled up in response to the pandemic as leaders are having to deal with uncertainty and restructuring as well as deciding what the future looks like for their organisation and how they are going to bring their people with them.”