Finding your Irish family: ‘Looking out the airplane window I cried’

Ireland Reaching Out connects the diaspora with volunteers from local communities 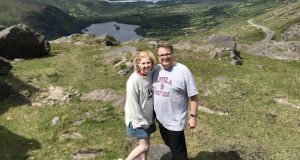 Jeanie Lewis and her husband visiting from Chicago.

When Jeanie Lewis, who is from Chicago, started tracing her family history a few years ago, she was able to find out a certain amount of information by herself. Her research revealed that she was descended from an Irishman who had taken part in the Fenian Rising of 1867, before emigrating to Chicago.

She was able to access that information through an Irish centre in Chicago, but she wasn’t sure what to do next. Then, a few years ago, she discovered Ireland Reaching Out (irelandxo.com), an online initiative that calls itself a “reverse genealogy” project. Instead of waiting for people to trace their roots, Ireland Reaching Out encourages volunteers in Ireland to connect the Irish diaspora to civil parishes across the country, where their ancestors emigrated from many years before. Volunteers do this through a message board system, where they can reach out, and the diaspora can reach in.

“I just posted a query to the Ardagh area, because that was the closest to where he said he was born, and I immediately got an answer,” Jeanie says. She was shocked when a volunteer got back to her almost immediately, and was unable to uncover reams of information about her family.

“He just uncovered so much information that was impossible for us to find. He was able to find a historian, and the two of them found the actual land that my ancestors owned, and made contact with the family and asked if my parents could see the house. Without it, we would never have known anything,” she says.

It was this discovery that led to Jeanie’s first visit to Ireland in June this year, with her husband and sons.

“It was an emotional experience,” she says. “The Aer Lingus pilot, as we were arriving, said: ‘Look out the window and you’ll see the coast’, and I cried. It was just amazing. It’s a beautiful country, and to leave it must have been terrible and heartbreaking. Those people never got back. Ever.”

As well as getting to visit the house where her ancestors lived, Jeanie was also able to connect with distant relatives in Ireland. Since returning to Chicago, she is determined to deepen her Irish roots further, and has started taking Irish language classes.

Since the idea for Ireland Reaching Out was conceived in 2009, thousands of people have been able to trace their heritage through dedicated volunteers in communities across Ireland.

Laura Colleran, programme manager with Ireland Reaching Out, says the initiative was the brainchild of Mike Feerick, founder of Alison. com.

“He felt there was a huge opportunity to connect the diaspora to local communities, and that local communities were more than willing and able to do their part in welcoming them home. There had never been a grassroots initiative to reach out and connect with the diaspora,” she says.

After a pilot programme was run-in South-East Galway in 2009, Ireland Reaching Out started to flourish around the country.

“Why do we wait for people to find out where their roots are in Ireland, when we at a local community level can find out who left from the area and trace them and connect with them?” says Colleran. “We can then go to them and say, ‘did you know that you’re connected to our local community, and we would like you to get involved with us.’

“The original idea was a message board for every single civil parish in Ireland. That was in 2013” - the same year as The Gathering national tourism initiative - “and it was phenomenally successful, because as soon as people were able to post a message directly to a civil parish in Ireland, all these messages started to come in from people who were just naturally searching and trying to connect with Ireland.”

This experience is echoed by Morag McLean, who is from London in Canada. McLean always knew that she had some Irish ancestry, but when she and her sister, Josie, did a DNA test, it sparked a desire to find out more.

The sisters had limited information about their ancestors, but what they did know was that their distant relative, Elizabeth Logan, was born somewhere around the west of Ireland. After stumbling across Ireland Reaching Out through Google, McLean decided to put the information into the forum for the area, and see if anyone was able to shed more light on her family’s history.

A week before she was set to visit Ireland for the first time with her husband, she received a response from a volunteer in the area, who was able to provide a huge amount of background detail about Elizabeth Logan.

“I just couldn’t believe it,” McLean says. “I almost fell off my chair with how much information she had about them. It’s really people like her who are on this message board, who are doing so much work to help people. It’s an amazing thing.”

The volunteer was able to trace the Logan family to a specific farm, and discovered that they were tenant farmers for the Tenison family in Roscommon. McLean now believes her ancestors may have been evicted during the Famine.

When she arrived in Ireland, McLean visited the village of Drunshambo in Co Leitrim to find out more. When she and her husband went into the post office to ask for a directory, to see if they could trace other descendants, they were told a man in the village might be able to help them. Local history enthusiast Noel McPartland was called to meet them at the post office. He was able to put them in touch with another descendant of the Logan family, and even drove them to the land on which their ancestors had lived.

“It was surreal,” McLean recalls. “I get teared up just talking about it. It’s just so important to know that that’s who you are. You came from those tenant farmers.”

Andrea Lister, also from Canada, has had a similar experience to McLean. She knew she was descended from the Ussher family in Ireland, and recently decided it was time to visit to find out more about her family’s history.

“I put the call out on Ireland Reaching Out and asked if you could see the family estate, to see if there was anything left of it. Someone replied right away and said that you can see it, and that it was in private hands, but that they would be happy to show us around.”

When they arrived in Galway, a volunteer from the area came to meet them, and he brought them to the family estate and checked with those who owned the land to see if he could show them around.

“It’s interesting in that I had found the Census records from 1911, and it says how many buildings were there and everything, but until you’re standing there and somebody is saying ‘the land extended from here to here’, it doesn’t mean as much. There’s something really profound about seeing the records come to life.”

Ireland Reaching Out volunteers were also able to help her track her husband’s heritage, who had ancestors from Waterford.

“We loved our time in Ireland. It was fantastic. We sort of felt like we had come home,” she adds.

While Ireland Reaching Out has been around for almost a decade now, Laura Colleran says that in her eyes, it’s just the beginning for the initiative.

“So much of what we know about Ireland is actually abroad and that was brought away by our emigrants, by our diaspora. So much of our history and heritage is not with us, and we can glean so much from connecting with them,” she says.