Smuggle sausages into your luggage, plunge into an ice bath instead of the Forty Foot 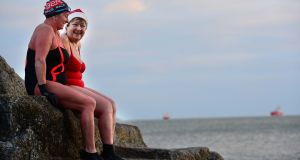 A dip in the warm waters of the Gulf Sea just doesn’t offer the same level of torture and misery that “sets you up for the day” as a plunge in the Forty Foot in Dublin. Photograph: Dara Mac Donaill / The Irish Times

You go to that pub on Christmas Eve because you’ve always done it. You loathe cream soda, but you drink it on Stephen’s Day because you always have. You eat ham and turkey - you also loathe turkey - and kiss under the mistletoe because “it’s traditional”.

Like a very loud and flamboyant Christmas bauble, tradition demands our attention at this time of year, no matter where we are in the world.

Every family, community, county and region has its own take on the festivities.

For the Irish abroad, painstaking work can go into recreating the perfect Christmas from home. But new twists on old traditions can also spring up: in Ireland, freezing blue bodies queue up to plunge into the icy sea at the Forty Foot; in Australia, Christmas - which falls smack in the middle of summer - wouldn’t be Christmas without a trip to the beach, but it’s an entirely different experience.

We took a look at some of the most popular Christmas traditions, and how Irish emigrants can re-create them abroad.

A box of Tayto. A bowl of King. A packet of ChocMallows. Caffrey’s Snowballs. A tin of Quality Street. A box of Roses. Lookit, whatever your ideal Christmas treat is, excess is important. It’s easy enough for Irish emigrants - especially those living in Europe - to stock up on meats and cheeses, but being stuck with ready-salted continental “potato chips” or American Hershey’s “chocolate” will definitely ruin Christmas.

In 2015, a questionable survey from Denny’s claimed that half of all Irish people have smuggled sausages into their suitcases when heading to distant destinations. Bringing perishables in to non-EU countries can lead to fines, but one Irish family I know used to illegally sneak pork sausages into the Middle East for the Christmas fry-up by getting the butcher to label them as “chicken”.

How to re-create it: It’s a bit easier to track down Barry’s tea in London or New York; less so in Abu Dhabi. GiftsDirect do an Irish treat box from €86, while ThePaddyBox offers ten items for €59.95. Also: nothing wrong with the time-honoured tradition of getting the family to send you a custom-made food parcel.

Turkey, a bone-dry bird as tasteless as it is ugly, is nonetheless mandated by the tyranny of tradition. Some people claim that the meat can be made tasty by holding the bird sideways in your arms for 15 hours, cramming it full of butter and having nine ghosts continuously baste it.

Outside of Europe and Anglophone countries, and especially in Islamic countries, ham can be harder to find. And spiced beef is simply too Irish to find anywhere else in the world.

How to re-create it: The Irish overseas will find turkey in most of our favoured emigration destinations, even Saudi Arabia. Remember, the only valid point turkey meat can make is that it feeds a large group, so if you’re a smaller party, why not opt for flavour instead by roasting a good-quality organic chicken?

Now’s the time to get really traditional: try making your own spiced beef; you’ll find plenty of recipes online.

Christmas trees are the decorative centerpiece of the Irish festive season, but in some countries where Christmas isn’t a big deal, such as Japan, finding a real tree can be a challenge. My family also head up the Dublin mountains to pick holly at Christmas time, and it wouldn’t feel like Christmas without this greenery.

Kissing under the mistletoe - one theory claims the berries of this parasitic plant are associated with fertility because they are the same colour as semen - is actually a relatively recent, imported tradition that was never well known in Ireland, largely because the plant is rarely found here.

How to re-create it: It’s simple enough to get an artificial tree, but a bit harder to track down holly and ivy, particularly in hotter climes. But evergreens are an ancient way of bringing nature indoors during the cold dark of winter so, really, any greenery should do the trick.

A dip in the warm waters of the Gulf Sea just doesn’t offer the same level of torture and misery that “sets you up for the day”.

How to re-create it: Relive the cold water shock of Galway Bay or the Forty Foot by plunging into a bath full of cold water and ice cubes. Or you could just skip the uncomfortable bit by going straight for the hot whiskey.

The Elf on the Shelf

This smug, authoritarian and unaccountable supernatural elf is priming your children for a lifetime of surveillance and having every aspect of their behaviour judged, with the omnipresent threat of terrifying reprisal. The pale-faced and creepy American marketing scam pretends to be a “tradition”; it’s not a tradition when it hasn’t even passed through a single generation and only became popular a few years ago. Best to throw it in the bin and bury the bin alive.

How to re-create it: Undeterred? Emigrants can still this bullying little snitch online or in shops across the planet.

The Handbook of Irish Folklore, published in 1942, suggests that people used to try divining the future by observing how the candles burned on Christmas Eve. This one may have passed into history but…

How to re-create it: Find some proper candles, not dainty tea lights. Watch how they burn and, to tell the future, simply project all your wishes and revenge fantasies onto the lumpy shapes. At the very least, wishing misery on your nearest and dearest might make you feel better about being away from home.

“The wran, the wran, the king of all birds” was once hunted on St Stephen’s Day (with one theory blaming its treachery against the saint, although the custom likely predates Christianity), and being paraded around on a stick by masked mummers in straw costume. Over the past century, the bird was replaced with a fake replica. The tradition largely faded but, over recent decades, has become popular in certain areas including, conveniently, Dingle and Fingal.

How to re-create it: Confuse your baffled neighbours by having a full-blown mumming procession through the streets of Singapore or the avenues of Adelaide. This isn’t a free-for-all, with the costumes having to conform to certain archetypes and characters, but you’ll find plenty of pinspiration online.

In every family, someone sets something on fire on Christmas day. I know, right? In mine, it’s usually my mother. A few years back, she chucked a lit match in the bin. More recently, she lit a candle near some Christmas lights, treating us all to the festive smell of burning plastic and electrics. And when he was little, my nephew, incensed at having to eat his Christmas dinner, immediately regretted throwing his entire Scalextric set in the fire. The household is always full of great excitement as the little ones wonder what will burn this year.

How to re-create it: There are matches abroad, and you’ll find kindling in plenty of locations. Or perhaps you have your own unique traditions?

Put a spring in your step for running in February
4