The night my da made Christmas for his wee girl

Older and wiser, I appreciate my father’s frugality and the way he crafted things to last 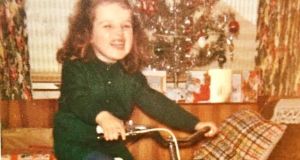 ‘No wonder we are unsure when we push off that first time without training wheels. We have to learn how to balance.’

It is Christmas morning, 1967, in a modest house on Antrim’s Dublin Road. With a big satin bow in her hair, the little girl is the picture of happiness, wrapped up in an outfit her mother knit for the occasion.

Santa has left a new bicycle. It is her first, and it is equipped with stabilizers. Stabilizers – her first big word. Even now, I like saying the word and conjuring all it connotes – stability, steadfastness, a firm hold, balance.

By all accounts, Santa had not read MIT engineering professor David Gordon Wilson’s Bicycling Science in which the professor wholly dismisses training wheels, pointing out, obviously, that they do not teach how to balance; they teach how to pedal. Because bicycling is the quintessential balancing act, Wilson advises instead to “adjust the bicycle’s seat low enough for children to plant their feet on the ground and practice by coasting down the grassy slopes.”

No wonder we are unsure when we push off that first time without training wheels. We have to learn how to balance, much like the way we are expected to swim if we are thrown in the deep end.

But this recollection is not about the bicycle or the little girl on it. It is about the green crib in the bottom corner of the photograph. My father made it for Gloria, my first doll. He wouldn’t have known it at the time, but my father could have been Eric Dawson making the plane for his child on Christmas Eve in Seamus Heaney’s poem “An Ulster Twilight”. Like his namesake, he belongs in a Heaney poem, adept in all his balancing acts.

Good with his hands and frugal, Da’s artisinal handiwork is the kind that imbues the Derry townlands he crossed on a motorbike in the early 1960s. He tells me it began as a matter of economic necessity – the farming and the gardening, the turf-cutting and roof-thatching, the craft and the carpentry all shaping and shaped by his home-place.

Older – and presumably wiser – I appreciate my father’s frugality and the way he crafted a thing to last. In my mind’s eye, I see him doing the mental arithmetic, sizing up the situation, cutting no corners. “If you’re going to do it, do it right.”

At 80, he is acutely aware of the miles between us , and harbours a yearning to be just down the road, to make things and make things right for his granddaughter and me. There’s the mantlepiece I’ve wanted since 1993, and the fascia board needs more than paint. I don’t know why I don’t remember to wind the Regulator clock he found for me in a Phoenix thrift shop six Christmases ago, or put in the effort to make my windows sparkle with newspaper soaked in vinegar and elbow grease. It would be no bother for him to mix cement to repair the brick mailbox again, or to show Sophie how to put windshield washer fluid in her car.

Once upon a time I had no time for what I construed as his obsessiveness, no tolerance for his sense of urgency over why all these things need fixing. I didn’t understand. I understand now. I understand that each of us wants to fix the unfixable, to live forever so our children will never experience something as minor as a flat tyre, or as heart-wrenching as the loss of those we love. We want to make the magic last, to stretch time and close distance, and find the right words right when we need them.

With so many minutes and miles between us, it startles me sometimes to take stock of the things I traded for a life in America – bits and pieces of homespun wisdom from the heart of rural Derry, the gardening tips and home improvement projects that would have coloured our lives had we lived just up the road.

It is from too far away, relying heavily on photographs and phone calls, brown paper packages and greeting cards, texts and status updates on Facebook, that Da has transformed into the grandfather he was always meant to be, eager for news of his granddaughter’s accomplishments that will be broadcast over hill and dale.

He will not admit that he likes the “new-fangled” technology – but secretly I think he loves it. He can read his favourite passages from the Bible on my mother’s iPad, or Google the answers to questions about the Japanese Maple trees he tends in his garden. He can ask Alexa about the weather forecast, or for assistance on the daily crossword. Such virtual connections soften the blow of time and distance.

He is sentimental, my da. I am too. Seeing the photo of his daughter on her first bicycle will bring a smile. I can imagine him standing over my mother’s shoulder, curiosity and anticipation twinkling behind his reading glasses. Together, they will ponder Eric Dawson and wonder which Dawson he is.

“Would he be anything to Jack Dawson, do you think?” My mother a childhood neighbour of the Heaneys, she will know. Once they place him, Da will return to the picture and wonder aloud where in the name of God the past 50 odd years have gone, and under his breath, a “Boys a dear,” before he falls silent, remembering the night he made Christmas for his wee girl.

Originally from Co Antrim, Yvonne Watterson emigrated to the US in 1988 and settled in Arizona where she works in education. She is director of education innovation at the Arizona Charter Schools Association, and has been recognised for her work in school reform and her activism on immigration. She blogs at Considering the Lilies . . . and Lessons from the Field.