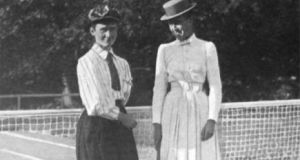 Kilkenny has long been renowned for the sporting stars it has produced on the hurling field. Their most successful player of recent history, Henry Shefflin, holds more All Ireland Senior Hurling Championship medals than the counties of Galway and Clare combined.

But perhaps the most successful athlete they have ever produced is all but forgotten - the international tennis champion Mabel Esmonde Cahill. To this day she remains the only Irish person ever to have won a US Open title; in fact she won five and could lay claim to a sixth.

An amateur sport, lawn tennis became increasingly popular in Ireland in the latter half of the 19th century among the gentry and the upwardly mobile middle class. The inaugural Irish Open was held in 1879 at the prestigious Fitzwilliam Lawn Tennis Club, with Vere St Leger Goold (who holds the distinction of being the only Wimbledon finalist ever convicted of murder) taking the men’s singles title) and 14-year-old May Langrishe (another Kilkenny native and future rival of Cahill’s) winning the women’s title. Cahill however wouldn’t compete at national level until the age of 23.

Recent research by historian Mark Ryan has provided us with greater insights into her life story. Born in Ballyraggett but educated in Roscrea, she was orphaned by the age of 14, losing both her mother and father in the space of two years. Her father had been a successful barrister and landowner, and her inheritance, even after it was parcelled out between Mabel and her 12 siblings, seems to have been enough to maintain her in relative comfort, and allowed her to complete her education.

It also provided her with the means to pursue her passion for tennis. Not a naturally gifted player, Cahill should have struggled, but at the time less experienced players were given scoring advantages so they could compete on even terms with other, more established contestants.

She began competing in local competitions in 1884 with her first appearance at the Kilkenny County and City tournament, where she managed to beat May Langrishe in a handicapped final. Following this bit of beginner’s luck they would face each other several more times in county or regional tournaments across the island over the next two years, though Cahill rarely came out on top.

In 1886 she made her way to Dublin to compete in her only Irish Open, where she was pitted against rival Langrishe once more in the opening round, though this time without any handicap. It ended in disaster for Cahill - she was defeated 6-0, 6-1. Langrishe would go on to claim the women’s singles title that year for the third and final time in her career.

Yet Cahill quickly rebounded, claiming gold in the Lansdowne Lawn Tennis Club Tournament in a handicapped competition the following month. She appears to have remained in Dublin for the next three years before deciding to embark for the United States.

After crossing the Atlantic, Cahill came into her own. She settled in New York and joined the local tennis circuit. The Brooklyn Daily Eagle carried the following report regarding her playing style:

“Miss Cahill, the young lady who has made her name famous as a tennis player, is a slight and rather delicate-looking girl, yet the severity of her play is the terror of opponents of her own sex.”

This “severity” enabled her to defeat opponents across the Eastern seaboard, culminating in her victory over reigning champion Ellen Roosevelt in the Women’s singles final of the United States Championship in 1891. She defeated Ellen and her sister Grace again in the doubles final before also going on to win the mixed doubles title for good measure, though the latter was yet to be officially recognised.

She returned the following year to defend her titles, being pushed to her limit in the singles final by 16-year-old Elizabeth Moore, but coming out on top following a harrowing five sets. She managed to win both the women’s and (now officially recognised) mixed doubles finals quite easily by comparison.

At the height of her fame, and perhaps a little disappointed at the lack of a consistent opposition, she soon tired of tennis, decided not to defend her titles and turned her attention to equestrianism.

Yet Cahill had made history by becoming the first non-American and the only Irish person ever, to win a US Open tennis championship title and the first player ever to win the singles, doubles and mixed doubles titles in the same year.

In recognition of her achievements she was inducted into the International Tennis Hall of Fame in 1976, and rightly deserves to take her place amongst the pantheon of Irish sporting greats.

This Extraordinary Emigrants article was written by Nathan Mannion, senior curator of EPIC The Irish Emigration Museum (epicchq.com) in Dublin’s Docklands, an interactive museum that tells the story of how the Irish shaped and influenced the world.

Irishwoman in Scotland: ‘The pandemic has brought me closer to home’