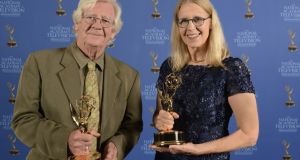 Profs Liam O’Brien and Rebecca Abbott, whose documentary on the Great Famine won a Boston/New England Emmy at the weekend. Photograph: Eric Antoniou

A documentary on the Great Famine, made by three professors at Quinnipiac University in Connecticut, has won a regional Emmy award in the US.

The 50-minute documentary was filmed and edited by Rebecca Abbott and co-produced by Liam O’Brien, both of Quinnipiac’s Film, Video & Interactive Media Department. Christine Kinealy, director of the university’s Ireland’s Great Hunger Institute, was historical adviser to the project.

"It’s a huge honor for me and my colleagues/collaborators Liam O’Brien and Christine Kinealy to have this sort of recognition for our work, Prof Abbott told The Irish Times.

Trailer -- Ireland's Great Hunger and The Irish Diaspora from Rebecca Abbott on Vimeo.

"The process of making this documentary took several years, and involved much research and consultation with many historians and others with knowledge of the many facets and complicated history of the Great Famine.  Given the several years of work we put into making the documentary, it’s very rewarding to know that our efforts are valued in this way.

"We’re also especially pleased and encouraged because this award may help us share more widely the complex history of Ireland’s Great Famine.  Although Ireland’s great hunger took place in the past, it can teach us many important, universal lessons, and give us all greater understanding to help with similar crises happening around the world today."

The film looks at the history of the Famine in part through the eyes of descendants of those who survived it, and of those who fled to Canada, through the Grosse Ile quarantine station, and Australia, under the Earl Grey scheme, to escape it.

Describing the film, Prof Abbott said that it "explores not just the potato failure that led to mass starvation, death and emigration in Ireland from 1845 to 1852, but also the historical, social and political  circumstanes that made the Great Famine almost inevitable".

The documentary was completed in November 2015 and was first  broadcast in March 2016, meaning that it missed the deadline for consideration for the 2016 Boston/New England Emmys, and had to wait until this year.

The Boston/New England Emmys are adjudicated by a regional division of the National Academy of Television Arts & Sciences.