‘I'm a nomad dancer, who jumps from here to there’ 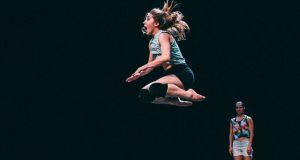 Hannah Rogerson is a 22-year-old professional dancer, originally from Newbridge, Co Kildare, who now lives in the Netherlands.

I left Ireland in 2013. I’d just turned 19 and was accepted into Fontys School of Fine and Performing Arts, in Tilburg, the Netherlands. I wanted to become a professional freelance contemporary dancer.

Did you leave family behind, and do you find it hard being away from home?

I had no connections with the Netherlands, other than the school, so I left everyone I knew. In the beginning, I found it very hard to be away from home. I’ve moved before as a child and had to change schools, so I already had some skills for adapting.

I dived into it, fell, got up, kept going and eventually came out on the other side. I’m finding it easier now because I’ve adjusted to the culture here, I know what I’m doing and I have my friends and my work.

Are other members of your family involved in the performing arts?

Not at all. I think that’s the reason my family gets on so well together: we’re all very different people. My dad works in computers, my mam is the homemaker, my sister Ella does science, my other sister Nina loves animals and my brother Euan is into drawing cartoons. None of them are into dance or performing (even though my dad and brother do have some great moves).

How did you become a professional dancer?

My parents are brilliant in that anything they see in us, they support. Anything we loved, my parents made sacrifices to make sure we would get the chance to do it. That’s how I became a professional dancer, I showed a passion for dance and my parents fed it. I took lessons and workshops throughout Ireland: in Newbridge with Judith Sibley, who gave me my first big role as Thumbelina, and at Celbridge School of Ballet with Gráinne McCardle. I joined youth dance companies DYDC and Shawbrook, which I would thoroughly recommend for young people pursuing contemporary dance in Ireland.

For my Transition Year, I did an alternative dance programme at Inchicore College of Further Education. As soon as I finished my Leaving Cert, and after two auditions, I was on a plane to the Netherlands to train for a BA in dance. I was lucky that all my internships in college have turned into professional jobs, so now I can make a living from it.

What are you working on at the moment?

I’m a freelance dancer so there are a lot of things going on at the same time in different places. One of the challenges is to try to coordinate them; it can often be a famine or feast situation.

In the Netherlands I’m working with choreographer Katja Heitmann, who recently won the Dutch Dance Festival prize for “outstanding choreographic talent”. Pandora’s Dropbox is a performance art piece that questions what it is to be human. All of the movements are in slow motion and there’s a moment where I have to lift a man who is 80kg, without any momentum, so it’s quite a heavy piece! But it’s very beautiful and makes a big statement and I’m honoured to be part of it.

I’m also working with Companie Woest in the Netherlands and Belgium and am part of their piece Lucky Shots. It is about defying gravity, so there’s a lot of acrobatics, with a nice mix of theatricality.

I’m also working with my partner Pieter Visser (a juggler) and the Chinese Pole artist Bavo de Smedt, in setting up our new circus|dance endeavour: TeaTime Company. Pieter and I have already created a duet, 1 Piece, 2 People, 3 Props, which has been selected to play at Theaterfestival Boulevard in the Netherlands this August.

Have you performed in Ireland, or do you have plans to?

I’m back in Ireland in September and October, working with Maiden Voyage Dance Company, based in Belfast. We’re working on the piece Pause and Effect, choreographed by Eleesha Drennan.

I was home for a few months earlier this year, doing my internship with Fidget Feet Aerial Dance in Limerick. I was amazed at the sense of community in the art world in Ireland. I was barely back and got a message from a teacher of mine asking if I wanted to collaborate in a music video for the Coronas’ We Couldn’t Fake It. She had seen on FaceBook that I was home and sent me a message. I feel like people want to help artists in Ireland. It was a good feeling to come home to that.

Does your working life involve a lot of travel?

Yes, yes, yes. There is a lot of travel. Three days in Ghent, a week in Brussels, a night in Amsterdam, two weeks in Poland – and that’s just the start of my summer.

Where do you live and why did you choose that location?

I am now based in Tilburg. It’s hard to say that I live here because I’m never here for longer than a week at a time, but it is where I base myself. I chose it because there is a good dance scene here, with Dans Brabant and de NWE Vorst, and because of the school here there are a lot of schemes for recent graduates and young makers and performers.

Tell us about your life in the Netherlands?

I share a house with four circus artists, so it can be crazy. You come down and people are juggling onions or in the splits, reading a book. They’re also very down to earth (despite the fact that they spend their days in the air, one does tight wire and another does straps). Tilburg is a nice, calm city. Whenever I have free time I’m at a park, juggling or reading. My rent isn’t too expensive, I cycle everywhere, by day I train my body to keep physically fit for dance, and I work or I travel, and at night I go to the theatre or to a circus party.

What are the best/worst things about living there?

I miss the hustle and bustle of a big city. I was in Brussels last week and I can imagine that that would be a great place to be based, there is so much going on there, especially in terms of dance.

I find the language hard. After four years I’ve picked up quite a bit but as soon as I start to talk, Dutch people (being the kind and caring people that they are) immediately switch to English because they can tell I’m not native.

Is it a good place for a professional dancer to be based?

Yes. The Netherlands has a lot of opportunities: there are the very big companies, the smaller companies, project based work and opportunities for residencies. Of course, like everywhere, it is definitely not easy to be a professional dancer. There have been a lot of cuts and some wonderful companies have disappeared, even just this year.

Honestly, no. There are some really brilliant teachers in Ireland and great companies but it’s very hard to reach the right skill level if you stay in Ireland.

Do you know any Irish people in Tilburg?

There are several dancers from Ireland here. It’s always nice bumping into them on the street: you can talk faster, you have the same sense of humour and you can reminisce about home. We created a piece together two years ago under Elysia McMullen’s guidance and it was just so much fun. It was just deadly dancing with a group of Irish people in Holland, thinking about home.

Is there anything you miss about living in Ireland?

The people, the music, Tayto, the little bumpy country roads, wildness, mountains, radio in the car, my family, Irish accents, my family’s dog ... I always take Tayto back to the Netherlands with me in my suitcase.

My plans are to keep doing what I’m doing. To base myself in the Netherlands but to actually be a nomad dancer who jumps from here to there, dancing for people.

If you work in an interesting job overseas and would like to share your experiences, email abroad@irishtimes.com with a little information about you and the work you do.