The news gets more horrible, but only apathy trickles down from President Trump 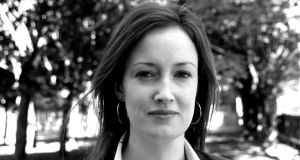 Lisa Tierney Keogh: 'I’ve chosen to live in the United States, and much to the confusion of my Irish friends and family I continue to live here despite a man at the helm who clearly engages in international relations from the lavatory.' Photograph: Conleth White

The sun is shining and the sky is a beautiful bright blue on an unseasonably warm October day in New York. From my bedroom window it looks like a great day outside. The horns are honking, the sirens are calling, the jackhammers are humming. As long as I stay inside my apartment with the windows closed, and turn off the internet, I can pretend things are fine. Turn on the kettle and eat more biscuits: that’s my job.

Bad things are happening here in the United States. The news gets more horrible by the week. It feels cyclical. Tragedy is followed by shock is followed by outrage, and repeat. But something is shifting: the mood is getting darker, and alarm is growing. There is a great deal of hope, in the form of resistance and assistance – people helping each other in crises – but the apathy trickling down from the top is sticky and sinister.

The deadliest mass shooting in modern US history occurred last Sunday. President Trump’s response to what happened in Las Vegas was to tweet victims and their families his “warmest condolences”, the kind of sentiment you send when a neighbour’s aunt dies of old age.

My warmest condolences and sympathies to the victims and families of the terrible Las Vegas shooting. God bless you!

I’ve chosen to live in the United States, and much to the confusion of my Irish friends and family I continue to live here despite a man at the helm who clearly engages in international relations from the lavatory. I not only live here but am an American citizen, a detail I sometimes only remember when I want to pick a shorter queue at Dublin Airport or vote for someone who might not encourage the return of Nazism.

I am a white-skinned Irish woman living in New York, although mostly I identify as translucent ghost white. I came to the US in pursuit of opportunity and possibility. As a female playwright I was out of options at home, so I thought I’d give gender inequality a go in a different country. Despite being an immigrant, and a woman, my skin colour puts me near the top of the privilege pile, so really I’m doing better than most. I don’t live in fear of deportation. I took care of that with a blue passport. I live in a state that mostly doesn’t have medieval laws about women’s healthcare. I have never seen truck nuts or a religious bumper sticker in New York. I am very lucky. And yet I am deeply troubled.

I don’t know what kind of healthcare I will have access to come January. Probably a pared-down plan that only covers ingrown toenails and tennis elbow

I don’t know what kind of healthcare I will have access to come January. (Probably a pared-down plan that only covers ingrown toenails and tennis elbow.) I worry for women living in states determined to eradicate their access to medical care. (I’m looking at you, Texas.) I think about all my friends and family on the west coast whose national security is in the hands of a man whose bloated sense of himself is matched only by his immeasurable insecurities. I deeply, deeply fear for every undocumented immigrant and their families. I wonder what they’d think now, the first immigrants who came here in the 1600s and thought, This’ll do grand. What would they make of this great casting out?

From my purple-passport-protected perch it feels as if I am watching the United States fragment. Piece by piece, it is coming apart like a jigsaw puzzle, each bit of the country breaking apart as it hits the floor, the pile of broken pieces that make up 50 states stacking higher by the week. Perhaps it was always going to go this way: a great experiment to unite millions of people who maybe don’t want to be united. Right now it feels as if it doesn’t want to fit together. It wants to be different things to different people. Perhaps that’s why we came here in the first place.

Many will label the horrific mass shooting in Las Vegas as a tragedy committed by a demented lone wolf. It’s maddening and exhausting to watch this country battle with itself about its racism problem. It hurts to see half the country dig their heels in and use this mass murder as a tool to gather more guns and the other half to have stricter laws. The pieces of this jigsaw puzzle do not fit. They never have. And I am left wondering, how many more times will this happen? How many more times will I have to put the broken pieces of my own heart back together?