After 40 years here their imitation brogues are tiresome, but I'm glad of the opportunity to talk about Ireland 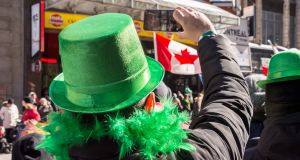 Montreal’s St Patrick’s Day parade: ‘You want to be Irish for a few hours? Sure, why not, I say.’

It’s March 15th here in Montreal and the traditional snow dump known as la tempête de saint Patrick is well underway. Worse still, for the big day (Saturday) the mercury may drop to -5C, and due to road works on the main shopping street of Ste. Catherine, the parade will make its way along drab de Maisonneuve Street. Not the best of conditions for the parade.

In the run up to the parade my well intentioned neighbours are as usual accosting me with their “top O the mornings” or “begorrahs”, in their best but cringe worthy imitation Irish brogue, which after 40 years I've grown a bit tired of. But instead of getting upset, I try to educate my neighbours about the parade, and Irishness in general.

For instance, I’ll explain that Saint Pat wasn’t Irish but (in today’s terms), British: born in Wales, buried in Northern Ireland, his cross incorporated into the Union Jack and so on. People are surprised, to say the least.

I suggest to my neighbours, that they have a look at the 2017 Dublin parade (on YouTube): it’s wonderfully done with great music, floats and a great crowd. Mind you, I’ll tell them, although it’s great fun, it is, in its own way, a Darby O’Gill stage-Irish caricature.

If they are really interested in what it is to be Irish, I nudge them in the direction of the Easter state ceremonies and parades held to commemorate 1916. These parades as they will see have a solemn, military, flavour with no floppy green hats, funny fake eye glasses, or drunken revellers.

Of course, I tell them about the other, less official, Easter parades - those with the marchers in their berets and sunglasses. These parades, I say, are a “drop of the hard stuff” of Irish identity, the Leprechaun’s Jungian dark shadow.

Finally, they should know of Northern Ireland's 12th of July parade which represents a culture and tradition that woven into the tapestry of identity on the island.

The 12th of July parade is, I know, a bit of a PR disaster, but all the same it does commemorate the battle that enabled England’s Trinity of fairly bloodless revolutions - the Glorious, Financial and Industrial – and lead to the British Empire, which, for all its faults, opened a door on the big wide world, this providing work and career opportunities for very many Irish, and creating the diasporas that allow little Ireland to punch above its weight.  So there you are -- silver linings, glass half full, lemonade from lemons and so on. Who would’ve guessed?

Despite my deep Irish roots – mum and dad were “children of midnight” (Salman Rushdie) who, as infants in December 1922, went to sleep Irish, and woke up the next day British - I have fond memories of the 12th of July. I remember how dad, on the big day, walked his kids to the top of our street to see the parade go by. A quiet, simple, man, he knew instinctively, I think, that he was inoculating us from what is now known radicalisation, or in those days, “the Cause”. His example helped me learn about our significant others, which enriched my life and may even have saved it when the violence broke out in 1969.

So, on March 17th I'll wish my Montreal friends to enjoy the Saint Pat’s parade even though it doesn't tell the whole story of what it is to be Irish. However, it’s a lot of fun, and a sign that summer is around the corner, which are good enough reasons to enjoy it.