In their own words: Emigrants on the difficulties of returning to Ireland

1,188 emigrants shared their opinions and experiences in new survey 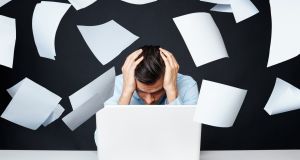 A new report commissioned by the Government has made 30 recommendations to smooth the way for emigrants moving back to Ireland.

These come as a result of a survey of 1,188 emigrants who have recently returned home, or are still living abroad, carried out by an independent research company Indecon. Here is what some of them had to say.

Short supply of housing and the rising cost to buy or rent are issues for all Irish residents looking for accommodation, but returning emigrants face particular barriers when searching for a place to live.

Seventy-nine per cent of those surveyed viewed purchasing or renting a home as difficult or very difficult, with proportions even higher among younger respondents.

“I am unable to obtain a small mortgage until I have worked in Ireland for two years, so I have to waste money on rent. I have owned two homes in the US and have paid all mortgages on time,” said one survey respondent.

“It is impossible to get a mortgage. Added to that the price of rentals and I am in a crazy living situation,” wrote another.

Many returning emigrants are excluded from the Government’s Help to Buy scheme, which offers a tax rebate for fist-time buyers, if they have not paid Irish tax in the past four calendar years. Indecon recommends adjusting this to 14-15 years, which is “likely to encompass nearly all emigrants who would be eligible”.

Difficulty accessing homeless services for at-risk people, especially those who have been deported or are returning in crisis situations, was raised by organisations working with emigrants.

Obtaining an Irish driver’s licence and car insurance were both identified as “major issues”.

“The cost and delays in being able to drive is a major frustration, and is likely to prevent many emigrants securing employment,” the report concluded.

“These include large numbers of skilled Irish emigrants in the construction sector who left during the property crash who will find it much more difficult to return to Ireland if there are barriers to their driving.”

“Cost of car insurance is gonna force us back to Australia, ” wrote one respondent.

“No company here would accept my no claims certificate so I was charged as if I just started driving, even though I have a full licence and a clean record for 20+ years,” wrote another.

Returning emigrants said finding a job was particularly difficult in their move home; almost 62 per cent told Indecon’s survey that this was either difficult or very difficult.

“As employment and career issues were key motivations for Irish emigrants to leave Ireland, facilitating their access to employment is critical if they are to return,” the consultants said in their report.

Making face-to-face interviews towards the end of a recruitment process was raised as another difficulty.

The failure of Irish employers to recognise professional qualifications and training overseas was mentioned as a problem particularly by emigrants working in nursing, teaching, construction and policing.

“Working experience abroad disregarded,” said one respondent. “My wife is a qualified psychiatrist but we think it will be extremely difficult to transfer her qualifications,” said another.

More than 36 per cent of returning emigrants said that opening a bank account at home was either difficult or very difficult. People who left before 2012 were more than twice as likely to find the process very difficult.

“My husband and I have looked at returning before now, but from getting my husband added to my existing Irish bank accounts to applying for mortgages has proved borderline impossible,” one emigrant told Indecon.

Others described financial and banking issues as “difficult”, “frustrating and expensive,” and that the process was mostly “dependent on a person’s financial status.”

More than 40 per cent of people described transferring pensions or other savings difficult or very difficult.

Indecon said that more information needed to be provided to returning emigrants on the process of opening a bank account in Ireland and around organising a pension or transferring a pension or savings back to Ireland.

They also pointed out that emigrants should be told that overseas savings can be used to be approved for a mortgage showing a record of repayments.

It advised that, within the EU, pensions payments are recognised and state pensions can be paid from each country where a person has worked.

Outside the EU, the Government has agreed bilateral social security agreements with eight countries, including traditional Irish emigrant destinations such as Australia, Canada and the United States.

Indecon recommended that the Government highlight to emigrants that they could make voluntary social welfare contributions from overseas to help them protect their State pension.

The consultants advised the Government to raise awareness about a change in the law extending the time limit for making voluntary contribution from within one year to five years of making their last contribution in Ireland.

A key motivation for many returning emigrants surveyed is to bring up their children in Ireland. Affordability of childcare services was an issue raised by many respondents, especially compared to other countries.

Regarding health insurance, the requirement for a 26-week waiting period was raised as an issue of concern, as well as the age-related community loading on health insurance taken out by those who left Ireland after May 2015.

Returning emigrants with a non-EU partner reported encountering significant difficulties obtaining a visa or permission to remain or work in Ireland. Almost 42 per cent said that it was either difficult or very difficult.

The number of “de facto visa applications” received by the Department of Justice and Equality has increased from 400 in 2015 to 529 in 2017 along with 572 for spouses of Irish nationals.

“Visa requirements for non-EU spouses are very rigid and the process appears to be extremely long,” said one emigrant quoted by Indecon from their survey.

“In other EU countries, citizens have a legal right to return home with their spouses. This should be the case in Ireland too, especially given the country’s history of emigration.”

The report says that an online system for visa applications or pre-clearance for spouses and partners should be developed.

Accessing social welfare programmes was described as a potential barrier for returning emigrants because they are required to be “habitually resident in Ireland.”

Indecon noted that deciding officers at the Department of Employment Affairs and Social Welfare had discretion to provide guidance protocol for returning emigrants and that guidelines issued has possibly resulted in social welfare refusals falling in recent years.

Obtaining a PPS number was raised as another barrier because proof of address was required to be presented during a face-to-face interview.

Indecon said that emigrants could pre-book an appointment at a PPSN centre and present a non-standard proof of address if they do not have a bill with their name and address because they are staying with family or friends while they look for a permanent place to live.

Demonstrating normal or habitual residence and accessing welfare supports were viewed as the most difficult for returning emigrants with 41.9 per cent and 44.7 per cent saying that they were either difficult or very difficult.

“Getting access to social welfare was impossible for me,” said one emigrant who took a two-year career break and returned home after a year as they were not granted an extension on their visa.

“When I returned home I was not able to claim job seekers as I was not unemployed.”

“Even though I had previously worked in Ireland an paid PRSI for several years, due to length of time abroad, I was not eligible for any benefits,” said another.

Securing places for children in over-subscribed schools on return, especially for those who have not put their names on a waiting list years in advance, and the high third-level fees for emigrants returning from outside the EU, were highlighted by respondents with families.

“My son who has just finished high school in Australia, cannot move home for university as he is now considered a foreign student and the costs of university are prohibitive to us,” wrote one parent.

“He was born in Ireland, and has always considered himself Irish, but because we, his parents, left for work, he is now not allowed move home for university at the age of 18, because we cannot afford it… We had hoped to move back, but this ruling has prevented us for doing so.”