Are the Wild Geese goosed? Why Irish societies in Africa are dwindling 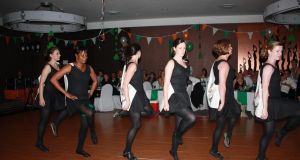 Irish societies in Africa are among the oldest in the world. Membership peaked in the post-independence era.

When we arrived in Zambia in 2008, the Wild Geese Society of Lusaka welcomed my husband and I with a ferocity that denied us any opportunity for loneliness. But the invitation to their monthly whist night made me wince. Sitting on a plastic chair in a hot, strip-lit hall, I thought, surely there are better things to be doing in this city on a Friday night than this?

Irish societies in Africa are among the oldest in the world. Membership peaked in the post-independence era, as thousands of Irish workers streamed to the continent to fill skills gaps left by exiting British colonial administrations. At a time when migration was more prolonged and communication with home difficult, Irish societies flourished as platforms for regular, lively and diverse diaspora engagement.

Fifty years on, while Irish people are still inherently drawn to each other and to Irish culture, the mobility and connectivity of emigration has a detrimental impact on the sustainability of once-vital social outlets.  Some of the people playing cards that night in Lusaka had been attending Irish society activities in Zambia for 40 years. They spoke of the mighty craic of the 1970s when large Irish communities energetically ate up all the societies had to offer.

The number of Irish people in Zambia in the 1960s and 1970s was so significant that several Irish societies formed across the country. Joining the missionaries and teachers who had come before them were Irish companies including Aer Lingus and Irish Cement. Government departments and the mine-speckled Copperbelt Province also drew skilled workers from Ireland.

In 1968, Denis Glennon from Co Mayo, and his wife Una from Co Monaghan, plunged straight from their honeymoon into a three-year stint as lecturers in a teacher-training college near Kariba. Contact with family was limited to snail mail and infrequent calls on the party line (a telephone line used by several landline subscribers, allowing no privacy), so Irish societies provided them with a tangible way to connect with home.

“It was nice to meet so many people from both sides of the Border. We would celebrate St Patrick’s Day and the 12th of July – there was an easy mixing of northern and southern people,” Glennon recalls.

“People may have been pioneers at home [the Pioneer Total Abstinence Association had 500,000 members in the 1950s], but shortly after arriving in the warm, thirsty climes of Zambia, the pioneer pins disappeared.”

Shortly after arriving in the warm, thirsty climes of Zambia, the pioneer pins disappeared

Glennon later took a contract with the Zambia Electricity Supply Corporation Training Department in Ndola, and became heavily involved in the Ndola Irish Society’s hurling team. They trained weekly, welcoming the Aer Lingus hurling team for a series of matches in Zambia 1972 before flying to Ireland to play a number of games, including a match in Croke Park.

“It was a memorable and special time. We remain strong friends to this day with people we met through the society,” he says.

Today, Irish societies are no longer as central to the community. The frequency and appeal of events is dependent on the interests and capacity of the committee. Filling the gap are Irish Embassies, whose presence and engagement strategies have strengthened over recent years.

Isabelle Fay, a development professional from Maynooth, arrived in Zambia in 2012. She heard about the Wild Geese Society, but was not drawn by it.

“Because we have so much connectivity from home, you don’t feel like you’re missing Irish stuff. You can just read the paper online, or send a message to your family,” she says.

Though she did attend the St Patrick’s Day Ball when she first arrived, as her family grew, her priorities changed and the event has not had the same appeal.

“The (Irish) Embassy has become a lot more involved in cultural activities over the last few years. They put on a St Patrick’s Day event where we can meet everyone, so we don’t necessarily want to spend another $100 going to the ball to meet all the same people.”

Across the border, the Irish Society of Tanzania is now in its 88th year, originally set up by Anglo-Irish soldiers as a type of benevolent fund. The focus in more recent decades has been on cultural promotion, according to Rita Bowen, president of the society since 2002.

“We used theatre as a way to showcase Irish culture. We put on plays relevant to Tanzania. Sive (by John B Keane) was so successful we did it twice, and the theme of arranged marriage was relevant to different communities.”

Bowen moved to East Africa in the 1990s to work with displaced people, before taking up a consular position in the Irish Embassy in Dar es Salaam. Over 20 years, Bowen has witnessed the dwindling of the Irish population in Tanzania – just 200 are now registered with the Irish Embassy – and the knock-on effect on Irish Society events.

“The Irish Society used to have a much bigger role in making you feel part of a community. The need is not as great anymore. People are in touch more with home. People are interested in going to the events, but not doing the work behind the events. Every year you would be wondering whether you’d have a committee. It has only survived so long because of a group of older people. In the last year, a lot of people have left.”

A significant factor impacting the Irish society and others like it is the changing civic space in Tanzania. Changes in regulations for community organisations present issues for a waning voluntary committee whose capacity to keep up with new administrative requirements is improbable.

Like Isabelle Fay in Zambia, Rita Bowen feels the Irish Embassy’s increased role in promoting Irish culture and providing social platforms for people with Irish connections has been important and effective.

Though Malawi’s Irish population is small – just 50-70 are registered – the Irish Society of Malawi’s annual St Patrick’s Day event attracts more than 700 people, nearly half of whom are Malawians. The event is key in promoting Irish culture and cultivating relationships between Malawi and Ireland.

Additional cultural activities can be successful, but arbitrary. Last year, a fruitful Croke Park-funded Gaelic football endeavour culminated in a Malawian All-Ireland involving five multicultural teams, but ended quickly once the driving force behind it left.

“A lot of it depends on who is on the committee, their interests, their age, and how long their contracts are,” says Irish Ambassador to Malawi Gerry Cunningham. “They could be here for six months or a couple of years. We would hope the Irish society wouldn’t be as dependent on NGO workers and volunteers.”

One idea is to set up a local alumni group for Malawians with Irish connections.

“The last Irish census showed 715 Malawians in Ireland. We need to link up, so that the Irish Society of Malawi is not just a small group for Irish people here,” he says.

The viability of Irish societies as champions of culture and togetherness in countries that lack significant Irish business connections or large legacy populations is in doubt. Each outgoing tide of long-term residents takes with it a part of these once-solid structures. Many such organisations have celebrated their 50th, 60th, 70th birthdays and more – but whether any will reach their 100th remains to be seen.

Ceire Sadlier lived in Malawi, Zambia and Tanzania between 2006 and 2014. She now lives in north Dublin with her young family.

If exercise came in the form of pills, we’d be queueing up for them
Real news has value SUBSCRIBE