Appreciating Dublin like a tourist on a visit back home

It’s nine years since I left. The city has changed, yet in ways, it’s exactly the same 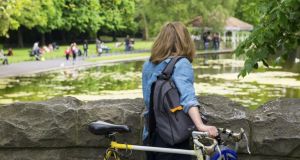 ‘Each day took me down a different path of reminiscing; the quaintness of Ranelagh, the bustle of Rathmines, and the peace of St Stephen’s Green.’ Photograph: iStock/Getty Images

Ok Siri, thanks, you can be quiet now, I know where I am. Sandwich Street (Sandwith) had me confused temporarily, but can you please stop making me look like a tourist? I used to live here you know.

“Used to” are the operative words. It is coming up to nine years since we left Dublin for the sandy shores of Cayman. In recent years we have had our September trips home to Croke Park, with a big Mayo game to look forward to. This year that was not to be, but we came home for a few weeks anyway, as I was let loose to work remotely in my company’s Dublin office.

The first challenge was finding the office. While I knew in theory where Ballsbridge is - I used to play tag rugby in Herbert Park, go to concerts in the RDS and shout for the Boys in Green at what was Landsdowne Road - in practice, walking from the IFSC to the office was another story.

I was looking forward to the walk. There is no such thing as going for a walk at “home” in Cayman; there are few pavements to start, never mind the daily 30 degree heat. Google Maps informed me it would take 40 minutes to arrive at my destination, but it looked more like an hour by the time I stopped at the Spar for a jambon, and taken at least three wrong turns on the “short cut” I heard about behind the “dort” station.

As I set off I noticed a lot of suits around. I was in the IFSC, I know, but the fashion was fantastic compared to what I am used to. Obviously living in a city with shops helps Dubliners with their attire. My sartorial choices for the week are much more brightly coloured. But as I marched across the Sean O’Casey Bridge in time to the rest of the high fliers, I felt like I was in the opening credits of The Apprentice. I was almost blending in.

I was ecstatic to find that the office is a huge multi-storey of different companies, with receptionists and revolving doors. My office block has two floors in Cayman. Saying good morning to my new associates for the week as we walk up the path, I was met with strange looks and eyes firmly cast down. I remember now the facelessness of a big city; in Cayman if you do not meet someone you know within a mile, you are probably asleep.

After a long day of anonymity, and with some more of Siri’s help, I headed towards the city centre to soak up some atmosphere. Walking down Grafton Street to work used to be a test of endurance; slow walkers, pointy umbrellas, sideways rain. Now all I could see were the vivacious colours at the flower seller’s stand, the Phil Lynott statue shining in the sunlight, and the orange glow of the paved streets enticing me to explore further.

All the restaurants and pubs I passed were packed. There was no evidence of recession that I could see, just a lot of sessions. It was a Monday night, and there was not a seat to be had outside, and very few indoors either. After a slight mishap when attempting to meet old friends (why move the Molly Malone statue?) we spent the evening wandering the hidden treasures of Drury Street and beyond. Tourists thronged the streets, mixing with the jovial after work crowd and commuters on their way home. I had been slightly anxious about being alone in the big city, but I feel surrounded and safe.

Evenings were filled meeting old friends; visiting them in their houses, spending quality time with them and their children, properly catching up on years lost. Such reunions are usually packed into one night in Dublin, hurried conversations in a crowded pub with as many people we can fit in during one stop on a hectic schedule.

Each day took me down a different path of reminiscing; the quaintness of Ranelagh, the bustle of Rathmines, and the peace of St Stephen’s Green. Walking down Baggot Street past my old workplace in the Bank building I noticed the office furniture now replaced by gym machines.

Ireland has moved forward in so many ways - same-sex marriage, repeal the eighth, the impending Brexit, the re-ignition of the Celtic Tiger, a connecting city Luas line. Copper Face Jacks even has its own musical.

Yet Dublin was still in the All Ireland Final, taxi drivers still love the Joe Duffy Show, Penneys was still my favourite shop in the world, and I still very much enjoyed a cup of Barry’s while watching Ireland AM before work. Maybe nothing really changes at all, day to day.

The good weather may have forced me to wear rose tinted sunglasses. Walking in the shadow of the Spire as the sun set over O’Connell Street, it may have been nostalgia and sentimentality, and remembering only the good times; but I missed it all. Bring on the next trip home.

Leaving Cert: ‘It feels aimless. I don’t know what the story is’
Real news has value SUBSCRIBE