An emigrant returns: The dragonflies have shrunk, the tractors have grown 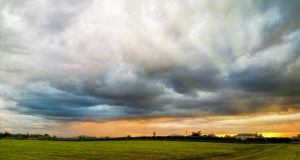 I felt a sense of loss of connection for a landscape that was once so familiar. Photograph: Getty Images

At the bog, just down past the church, long rows of turf, in little clamps, were curing well in the sun. Perhaps, until now anyway, the Irish summer hadn’t been as damp as the locals were making out.

The uniformity of these rows stood in stark contrast to the way we’d spread the barrow-loads we’d caught as they flew up from our father’s slane. Bord Na Móna’s intention to wind down its operations can’t come quick enough, if this ancient fragile ecosystem is to be preserved.

Those diminutive dragonflies on the bog were surprising. These were such meagre specimens, the same size of grasshoppers, and much smaller than I remember. I’d thought at this time of the year, much larger ones, resplendent in their unique markings, would surely be darting around.

The proliferation of bramble was also surprising and striking. They were thriving, almost brazenly it seemed, with their ripe red berries on display, as if peat was their preferred, age-old habitat. I picked a couple and they were a little tart but surprisingly good.

On a more positive note, there were also what appeared to be myriad wild flowers and grasses, evidence of a relatively healthy ecosystem, on the as yet intact high bank; species of heath or sedge perhaps, whose names elude my scant botanical knowledge.

As an infrequent visitor to Ireland, my memory may well be increasingly suspect, but the tractors are so much bigger now, almost the size of small houses. And the drivers, invariably wearing hi-vis tops, and barrelling along with their overhead flashing lights, looked barely old enough to have sat the Junior Cert, never mind the Leaving.

In the old days, I could easily recognise the distinct sound of a David Brown and those ubiquitous Massey Fergusons. Even the arrival of an exotic Zetor into our neighbour’s yard one spring had its own unique sound. Having come all the way from Czechoslovakia, no less, this Zetor was sceptically regarded, and probably even derided. Its cab radio, apparently a standard feature of the model, had the men muttering.

The farmer who’d had the temerity to bring such a yoke to the district was surely getting ahead of himself. From what I recall, parts of the Zetor, possibly its indicators, did indeed quickly perish; but the tractor outlasted its owner, who subsequently succumbed to a massive heart attack, well shy of his 60th birthday.

The super-sized 21st-century tractors’ sounds are – to me – indistinguishable from each other. Their arrival signals an almost corporate aspect to modern farming. They were hogging the otherwise near deserted narrow roads. Their purchase and running costs suggest a substantial financial investment, which must take some considerable time to recoup.

Of course, there were also signs of inevitable decay. Amid some new bungalows, houses where our neighbours once lived and have long since abandoned were now being laid waste by the forces of nature.

I didn’t get to see one of our closest neighbours, who my brother said was now so old and hard of hearing that it was unlikely she would even recognise me. A visit was far more likely to be unsettling rather than congenial for her. Like so many other women in the district, she had once spent so much time in her front garden, but there was no sign of her at all whenever I walked past her distinctive white-washed pebble-dashed gable.

My daughter, more familiar with the sunburned terrain of Australia, commented on how green everything looked and how it resembled the landscape of Midsomer Murders. I was loath to disabuse her of this somewhat benign comparison.

Inevitably, I felt a sense of loss of connection for a landscape that was once so familiar. My daughter was right, of course: with the overgrown edges along the roadsides, there was an undeniable lushness everywhere – one that would be the envy of any Australian farmer.

We drove past a recently severely shorn hedge, overlooking a small lake, on a stretch of road not far from Granard. Perhaps the owner was anxious the view of the lake would not be impeded to passersby.

But for the most part, farmers seem to be abiding by the rules governing hedge cutting. Apart from the occasional wood pigeon, jackdaw, blackbird and solitary magpie, I saw and heard little evidence of smaller birds. No signs of wrens, finches or even any robins. I heard no startled cries of pheasants wherever I went walking.

There was little visible evidence of activity in the fields. Perhaps with high-powered farm machinery, invariably operated by a solitary person, the work can being completed in a short span of time and there is no call for farmers to spend a lot of time at all toiling in the fields. There also appeared to be an absence of necessity for any communal activities, traditionally associated with farming in Ireland. But this progress surely comes with its own cost.

Of course, I may be mistaken. I was only back for a little while. And then, I was gone again, soon to be immersed in the hazy world of boarding passes and airport terminals, with the unwelcome fugue state of jet lag soon to set in at my journey’s end.

And yet, I’d like to go back again and perhaps seek out the parts of the countryside I haven’t seen for many decades now. That’s the thing about Ireland, it doesn’t let many of her emigrants go quite that easily. A clean break may well elude most of us.