Irishman in Brazil: ‘The longing for home never really goes away’

At no point did I make a decision to move here. I just went with the flow, and it has been eight years 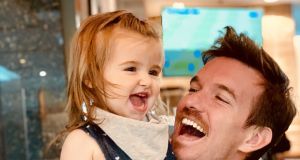 Irish writer Patrick Holloway with his daughter in Brazil.

I have no idea how someone has the courage to consciously decide to move abroad, as I’ve never been able to do that. It was something that just seemed to happen to me, and I’ve now lived abroad more than 13 years.

As a teenager, recently mangled by the Leaving Certificate, then the results, and a rejection from Trinity College Dublin for acting, I was at sea. My images of grandeur suddenly seemed woeful. Then my best friend, Ailish, was off to visit University of Stirling in Scotland, which I had also been accepted for, and I decided to tag along, welcoming a weekend away from the turmoil I had constructed around me.

I followed her there. I felt that if I were to be lost, it would be better accompanied by my best friend. I ended up studying English and journalism, and got a job in a cool cafe. There I would become friends with someone who had her heart set on spending a year abroad.

“You should do it too,”she said.

“Ugh, all that paperwork,” I replied.

She ended up doing all of that paperwork for me, and before I knew it, I was moving to North Carolina in the United States, and leaving two years of a new life behind me. I broke up with my girlfriend, saying that long distance never works, only to fall in love with a Brazilian woman in my new university. I studied creative writing and started writing arduous, clattering poetry.

I returned to Scotland to finished my master’s degree, and then decided to go to Porto Alegre in Brazil to spend three months with Cíntia, my now wife, to see what we were going to do with our lives. At no point did I make a decision to move there, at no point did I think I would never move back to Scotland, or even Ireland. I just went with the flow, and it has been eight years now. To decide something requires clarity, confidence and conclusiveness, all the qualities that continue to elude me. People who are able to decide, to make up their mind about something so gargantuan, deserve respect.

I started teaching English here, and then the first PhD in creative writing opened in one of the best universities in Brazil. I thought it was a sign. My wife got a good job. Life happened and got in the way of that other life that I was never able to plan.

I got a full scholarship for the PhD, and soon was immersed in another language and feeling shy, out of place, and a little aloof. I loathed the circumspect person I had become in Portuguese. I desperately longed for home, for an uncomplicated and painless paradigm. Yet, that shy, overly self-conscious state of existence unveiled enigmas of who I was. Through another language, I learned who I had been before.

Now I spend my time between running my own English school and writing. I have grown accustomed to the norms of life here, and when I go back “home” to Ireland, I am reminded of how things used to be. In truth, after living abroad for so long, I go back home and see Ireland as a magnificent, untouchable land full of vibrant, easy-going and benevolent people. The longing for home never really goes away.

My school is full of youngsters, fresh with futures of freedom and travel. I motivate them, encourage them to study for International English Language Testing System (IELTS) or Test of English as a Foreign Language (TOEFL) qualifications. The list of pros are endless, I tell them. You’ll never regret it. When they have a choice of where to go, I always mention Ireland, disclose stories of our treasured land. I have the benefit of seeing Ireland now as both home and abroad, and it is a bit of both to me.

Each student arrives determined and steadfast. They have such certainty in what they want to happen next. I envy them that a little. I wonder where I would have ended up if my best friend had not been so brave, so sure on what to do next.

I am thankful to her for her courage. I owe so much to that first move abroad. My daughter is now learning to speak. She mixes the two languages, unaware of the difference. When I think of her future it is impossible to imagine where she will end up. It is strange to think she will probably grow up considering herself Brazilian – that Ireland will be a part of her but far off, distant. That she will not have a Cork accent.

Either way I will try and bolster the boldness it takes to decide, will giver her examples of her godmother. I will nurture the hunger to find the answers that only travelling can give. And if, like me, that steadfastness and conclusiveness is nowhere to be found, I hope she will find friends who are brave enough to take her with them.

Patrick Holloway an Irish writer whose stories and poems have been published widely in the UK, US, Australia and Brazil. He has had his work published in Overland, Poetry Ireland Review, Papercuts, The Illanot Review, The Stinging Fly, The Irish Times, among others. His short story Laughing and Turning Away won second place in the Raymond Carver contest. His story The Lift and The Fox and the Lilies was January’s Irish Times Story of the Month. He has recently completed his first novel.