Returning to Ireland with your non-EU partner? How the new rules will make it easier 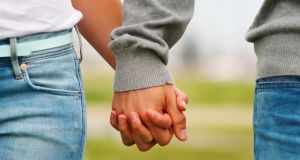 Richard King is the project leader with Crosscare Migrant Project, a non-government organisation working with Irish people both leaving and returning to Ireland.

One of the most consistent queries we have received here at Crosscare Migrant Project over the last three years is “I’m coming back to Ireland - how can I bring my non-EU partner?” Until this week we had to tell people “well, there is a way, but they’re not going to be able to work here for at least six months or longer”.

The immigration system simply didn’t allow for any application to be made from outside the Ireland, and it took at least half a year to be processed after arrival.

Some people, probably those used to the fickle nature of immigration systems the world over, accepted it and went ahead. Others just decided they could not afford to make such an expensive and life-altering decision without the security of both partners being able to work. It was a huge barrier for returning emigrants.

Minister for Justice Charlie Flanagan’s announcement of the decision to implement a pre-clearance system for non-EU de facto partners of Irish citizens returning from abroad is very welcome. Simply put, it means all the hard work getting through the immigration system can be done before coming back. The non-EU partner will have access to the labour market or permission to set up a business almost immediately on arrival.

A de facto partnership is considered as one “akin to marriage”. It basically means the couple are in a durable and lasting relationship. Proof of co-habitation of a minimum of two years is required to prove this, so things like joint bank accounts or shared tenancy agreements are a great way to evidence it.

Married couples or civil partners have a different route to getting immigration permission - they can apply directly on arrival in Ireland (if they are visa required they have to have gone through a “D-visa” process first) by registering with an immigration officer.

The reason for the de facto permission taking longer is usually because the nature of the relationship has to be examined in the absence of a legal document such as a marriage certificate.

We’ve lobbied for this pre-clearance change for since 2017, and it was one of the 30 recommendations in the 2018 Indecon Report into barriers for returning emigrants commissioned by the Department of Foreign Affairs and Trade.

In practical terms we hope that it will do one thing - give those weighing up the decision to return to Ireland the security of knowing their partner will have guaranteed permission to live and work here. It is a fundamental consideration in any decision to come home because the expense can be huge: flights, shipping, rent deposits, insurance, and all the associated costs that come with moving country and starting afresh.

But it’s also more than that. Returning to Ireland as a couple from two different countries always has two sides: for one person it’s coming home and for the other it’s emigrating. For anyone moving to a new country the chance to use their professional skills and experience, in a job or in setting up a business, can be a really important factor behind them settling in and in the continued success of their relationship through a time of change. Over and over we have heard people say they don’t want to be a burden on their partner. For those who had to wait six months or up to a year after arriving in Ireland to be able to work it often put a huge strain on them, both financially and emotionally.

The new pre-clearance system will go a long way to helping relieve this stress. As with any immigration process, it has requirements and conditions that will need to be fulfilled. In the main they are proportionate and fair. Of particular note is the fact that there is only a small processing fee - in contrast to the punitive costs associated with some other countries’ systems such as the UK. It’s a very good reflection on the Irish Naturalisation and Immigration Service (INIS) that the new scheme is not viewed as a source of revenue but as a way to improve the system.

A note of caution does need to be sounded. The success of the pre-clearance system will in a large part come down to the efficiency of the processing. A long delay or uncertain processing times could have a huge impact on those returning. For example, couples with children need the assurance of being able to get a response in time to put everything else in motion and get back before the school year starts.

Equally we hope that discretion will be applied in emergency or crisis cases. We sadly see a number of people each year forced to return at very short notice to care for a loved one, or because of some other situation outside their control. Some people are deported for overstaying visas. Some are fleeing conflict or violence. In these cases we strongly urge the INIS to facilitate expedited processing, or even permission for the non-EU partner to enter Ireland and then go through the application process. Emergencies can’t be planned for and there is never a benefit to families being split up.

We hope it makes it easier for Irish living around the world in relationships with non-EU citizens to make the big decision to return home. Anyone who wants or needs our help in navigating this new system can contact us at www.migrantproject.ie

Crosscare is funded by the Department of Foreign Affairs’ Emigrant Support programme.