Calling someone what they want to be called is the civilised, polite thing to do

Donald Clarke: The non-binary pronoun ‘they’ is the dictionary’s word of the year 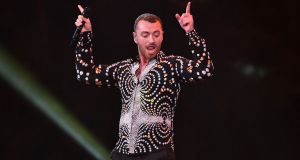 Sam Smith tweeted they identify as non-binary, and would like to be referred to as ‘they/them’. Photograph: Samir Hussein/WireImage

We are used to “word of the year” being something awful from the internet or street slang. “Youthquake”, “vape” and “selfie” have recently figured in the Oxford English Dictionary’s variation on that handy column-filler (yeah, I know, sorry). As is so often the case with American institutions, Merriam-Webster dictionary has, however, generally taken a more sober approach. “Justice,” “feminism” and “surreal” – all words with long histories – have figured in recent years. For 2019, recognising online searches, the dictionary has sided for a very particular usage of a very common word. The word of the year is “they” when used as a singular personal pronoun for non-binary people.

This is good because it reflects a genuine and welcome change in language. It is also good because it will annoy people who deserve to be annoyed. You know who I mean. They used to be retired admirals and lady captains of suburban golf clubs. “Look what they’ve done to ‘gay’! Perfectly good word that I once used daily to describe my state when drinking a gin before Gardeners’ Question Time. If I use it now people’ll think I am a flaming…” And so forth. Now those people are, among other sorts, junior software engineers from Phoenix who, when not whining about “they” being used to describe a singular entity, bellow at “Social Justice Warriors” for creating a “woke” travesty of Star Wars. It would be an awful shame if one of them were to have an apoplectic fit.

Merriam-Webster must have had a nightmare counting the mentions of such a common word and determining which fell into the correct linguistic category, but they’re sticking with the claim that searches for “they” were 313 per cent higher this year than they were in 2018. The widening of usage was emphasised in March when Sam Smith declared themselves non-binary and – as you will already have gathered from this sentence – confirmed that henceforth the singer’s pronouns were “they/them”. “I understand there will be many mistakes and misgendering, but all I ask is you please please try,” they wrote. “I hope you can see me like I see myself now.” We’ll come back to the first bit of that.

Today is a good day so here goes. I’ve decided I am changing my pronouns to THEY/THEM ❤ after a lifetime of being at war with my gender I’ve decided to embrace myself for who I am, inside and out... pic.twitter.com/IVoLTYbAWd

To be fair to those who balk at the shift, there has been some disingenuousness in the argument, made by proponents, that there is nothing new going on here. English has hitherto had no gender-neutral singular personal pronoun to use when we have yet to establish who we’re talking about. “He or she” was there as an option, but that usage becomes enormously clunky when repeated throughout a paragraph. “He or she will make a speech while his or her Nobel Prize is being transferred to his or her suite. He or she will then…” And so on. One solution, of course – still not uncommon, alas – is to just stick with a masculine personal pronoun. Men are, the implicit argument goes, the default settings for human beings. Benjamin Dreyer, copy editor and author of the essential Dreyer’s English, ain’t having that. “I’m having thoughts about writers who persist in using the allegedly epicene ‘he,’ and they’re not nice thoughts,” he wrote recently. (Dreyer applauds Merriam-Webster’s inclusion of the non-binary “they/them”.)

In recent years it has become accepted practice to use the third person plural instead of the baggy “he or she”. My understanding is that most retired admirals and golf-club lady captains are fans of the Great British Bake Off. They will have heard Paul and Prue, when judging the technical challenge, refer to each unidentified baker as “they”. That sort of thing.

It is, however, not correct to suggest that this usage is identical to the one acknowledged in Merriam-Webster’s word of the year. The supposed grammatical infelicity is the same – “they” is standing in for an individual – but, in the current case, we are not necessarily unsure of that person’s identity. They may, for instance, have been confirmed as the bloke who sang the theme tune to Spectre. It requires, for most of us, an intellectual leap (or hop, anyway) to refer to a specific person as “they”. Smith acknowledged that in their statement. They allowed that people will get this wrong and ask only that we try to write as suggested.

It is worth taking that leap (or hop). Not because we fear cancellation by the imaginary hordes of Social Justice Warriors. Not because we’ve been brainwashed by the fabled Woke Police. It is worth making that shift because it is the polite thing to do. The civilised procedure is always to call people what they want to be called. It is not that long ago that correspondents to newspaper letters pages scoffed at constructions such as “African-American” or “indigenous people”. They got over it. Or they died.