Joker leads with 11 nods, while The Irishman and Once Upon A Time In Hollywood earn 10 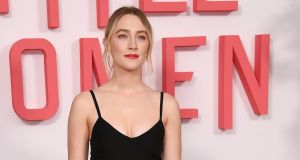 Saoirse Ronan has been nominated for a Bafta. Photograph: David M Benett/Dave Benett/WireImage

Saoirse Ronan has been nominated for a British Academy of Film and Television award (Bafta) for best actress, for her portrayal of Jo in Little Women.

Overall, Joker leads the nominations with 11 nods. The origin story of the comic book villain, starring Joaquin Phoenix as Arthur Fleck, is in the running for best film, best actor, best adapted screenplay and best director.

It is closely followed by Martin Scorsese’s gangster epic The Irishman and Quentin Tarantino’s ninth film Once Upon A Time... In Hollywood, which both scored 10 nominations and will also compete in the best film category, alongside Sir Sam Mendes’ war film 1917, which triumphed at the Golden Globes on Sunday, and Korean film Parasite.

Phoenix will compete with Once Upon A Time star Leonardo DiCaprio, Marriage Story’s Adam Driver, Rocketman star Taron Egerton and Jonathan Pryce for The Two Popes in the leading actor category.

Ronan’s fellow nominees for the leading actress Bafta are Irish actor Jessie Buckley for Wild Rose, Scarlett Johansson for Marriage Story, Charlize Theron for Bombshell and Renee Zellweger for Judy. Margot Robbie scored two nominations in the supporting actress category for her roles in Bombshell and Once Upon A Time... In Hollywood, alongside Laura Dern for Marriage Story, Scarlett Johansson for Jojo Rabbit and Florence Pugh for Little Women.

The supporting actor nominees are Tom Hanks for A Beautiful Day In The Neighborhood, Sir Anthony Hopkins for The Two Popes, Al Pacino for The Irishman, Joe Pesci for The Irishman and Brad Pitt, Once Upon A Time ... In Hollywood.

Bafta chair Amanda Berry said the nominations, announced by Asa Butterfield and Ella Balinska, “showcase and celebrate the extraordinary skill and creativity behind and in front of the camera”.

This year’s Bafta ceremony will be hosted by Graham Norton and takes place on February 2nd. – PA