Donald Clarke: Why Scrooge is the gift that keeps on giving 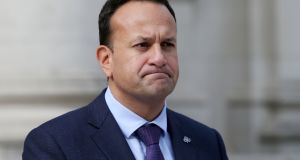 It would be much in keeping with the tone of A Christmas Carol – the opening sections anyway – to write a grumpy column debunking it for the ages. A Marxist might note that the narrative’s internal solutions revolve around charity rather than reform of government. “The Treadmill and the Poor Law are in full vigour, then?” Scrooge comments early on. We are meant to shudder, but no alternatives to those monstrous phenomena are offered.

A conservative might suggest that, for all the efforts at pathos, the poor have only themselves to blame. A conservative did say that. One Leo Varadkar, speaking to this newspaper in 2007, described A Christmas Carol as his least favourite Christmas entertainment. “Tiny Tim should get a job,” Leo, then an everyday TD, continued. (I was genuinely surprised to discover, upon looking this up, that he had not been misquoted. It sounded too much like something Spitting Image might have put in the mouth of Margaret Thatcher.)

So if you want to give A Christmas Carol a kicking, go ahead. Work your boots down to the toecaps. When you’re finished, fling it out into the melting slush. Every sacred cow invites slaughter.

We’re not doing that. We are here to celebrate the most durable and translatable unit of English prose since Shakespeare. “Translatable” is the word worth focusing on. It hardly needs to be said that another major version of Charles Dickens’s 1843 novella is on the way. The BBC’s latest adaptation, which begins on December 22nd, stars Guy Pearce as Ebenezer Scrooge, Andy Serkis as the Ghost of Christmas Past and Stephen Graham as Jacob Marley (quick and dead). Stephen Knight, who wrote Dirty Pretty Things and Eastern Promises, is behind the typewriter. There’s talk of a musical version with Will Ferrell and Ryan Reynolds for Apple. Bennett Miller, director of Moneyball and Foxcatcher, is allegedly circling an adaptation by Tom Stoppard. And on it goes.

Most attempts to identify the most-adapted novel in history settle on A Christmas Carol. There have been many cracks at Les Misérables. There have been a plethora of attacks on The Three Musketeers. But that Christmas yarn seems to hold the record. There are certainly more than 25 features. Scrooges have included Jim Carrey, Patrick Stewart, Albert Finney, Michael Caine, Kelsey Grammer, Jack Palance and Christopher Plummer. Then there are the endless TV parodies of the story: Blackadder and Beavis and Butt-Head both had amusing wallops. The current theatrical adaptation at The Gate – featuring Fionnula Flanagan, Camille O’Sullivan and Katie Gilmore as the ghosts – has gone down like a well-laced eggnog. Writing in this newspaper, Sara Keating argued “you would need a heart harder than Scrooge’s” not to join in the celebrations.

It is, surprisingly, not evil Mr Potter who takes on the Scrooge role; it is the hitherto saintly George Bailey

A smart academic could write the history of the 20th century through adaptations of A Christmas Carol alone. Trivia abounds. Which budding stalwarts of television played the younger Scrooge and Marley in Brian Desmond Hurst’s immortal Scrooge (1951)? It was George Cole, later Arthur Daley, and Patrick Macnee, future Steed in the Avengers. That classic, with Alastair Sim as the old meanie, has a fair claim to be the best filmed version, but reasonable arguments can be made – and often are made – for the riotous Muppet Christmas Carol.

Focusing on the formal adaptations risks, however, underestimating the full influence of A Christmas Carol. It is startling to note how many of the most well-known Christmas films (both good and bad) follow the structure of Dickens’s novella: a jerk cheers up and learns to enjoy the season. That’s what happens in the later stages of It’s a Wonderful Life. It is, surprisingly, not evil Mr Potter who takes on the Scrooge role; it is the hitherto saintly George Bailey. It is George who falls into despair before being talked out of his misery by a friendly spirit. Unbelievers are persuaded in both versions of Miracle on 34th Street. In Elf, Will Ferrell wins over the hitherto Scroogy James Caan. Tim Allen eventually gets on board in both the thin Santa Clause and the terrible Christmas with the Kranks.

There are many reasons to explain the durability of this endlessly delightful entertainment. Given that it invented so many of the Christmas tropes, it’s hardly surprising that they are all there to be exploited. The author’s belief in the possibility of redemption is always welcome as readers and viewers square away another year. But we should not underestimate the beautiful clockwork of that structure. A Christmas Carol came as Dickens was swivelling from the delicious chaos of early works such as Nicholas Nickleby to the more ordered genius of David Copperfield and Little Dorrit. He here devised a pattern every bit as recyclable as those in Hamlet or Don Quixote. Only a monster would begrudge its endless reappearance.

Dancing with the Stars: Shock exit for teary-eyed Sinéad O’Carroll
10

How do I get my child to read books with more words and fewer pictures?
Real news has value SUBSCRIBE