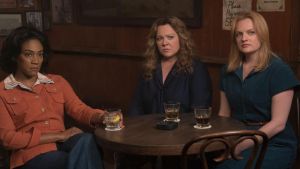 If you know anything about The Kitchen you know that it finds Melissa McCarthy, Tiffany Haddish and Elisabeth Moss running a crime business on the west side of Manhattan in the 1970s. That sounds like enough to be going on with.

Based on a comic sequence by Ollie Masters and Ming Doyle – this is technically a DC movie – Andrea Berloff’s flick promises dress-up and violence to the heavy sounds of a great musical era. That’s surely enough to be going on with.

Unfortunately, the film can’t quite live up to even those humble expectations. You get the dress-up and you get the hits.

Shot in shades of brown corduroy by the gifted Maryse Alberti, The Kitchen never shirks in its efforts to place the period within inverted commas. I’m sure they have looked at news footage and archival newspaper photographs, but the ambience is closer to third-generation Kojak juiced up with the most obvious beats from the Scorsese songbook.

About two-thirds of the way through, Berloff even goes so far as to restage the Layla (Part 2) section of Goodfellas – bodies piling up in scruffy alleys – to the ill-advised strains of Carry On My Wayward Son by Kansas. Were ELO not available?

The shallowness of the depiction would matter less if the story made a modicum of sense. We don’t need Steve McQueen’s recent film adaptation to point us towards Lynda La Plante’s seminal TV series Widows.

Melissa McCarthy is the robust Kathy Brennan. Elisabeth Moss is the (initially, at least) more reticent Claire Walsh. Tiffany Haddish, an African-American who married into the Irish mob, is the intelligent Ruby O’Carroll.

Hitherto stay-at-home moms (of a type), they find their lives upended when the FBI bangs up their husbands. Some financial help comes their way from the mob, but they soon realise that it is not enough to meet their needs.

They take over a protection racket here. They make connections with neighbouring Italian mobs there. In absurdly rapid fashion, the three have more money than they can comfortably count.

The Kitchen is not interested in explaining the mechanics of the business. We take it on trust (or we don’t) that strength of character alone will propel them to success in their criminal enterprises.

Nor does the film make any proper effort to explain the individual character arcs. Looking cool in the right hoodlum tat, Domhnall Gleeson emerges from the vapour as a killer who falls for Claire and encourages her too-precipitous slide from abused uncertainty to homicidal confidence. One minute he’s not there. The next he’s a vital part of the team.

Events that should be calamitous pass with only raised eyebrows from the trio of fearless entrepreneurs. We assume that the characters have slid into a terrifying moral quagmire, but little they do or say helps to communicate that shift. We’re just . . . here.

There are saving graces. The amusingly unpleasant recurring gag about chopping up bodies in the bath gives the structure some sinew, but the women manage neither sufficient glee nor sufficient horror at the gruesome task. Again, the scenes are just . . . there.

We do, at least, get to see three excellent actors wearing cool clothes while waving big guns. They may be caught up in a series of motiveless complications – the final narrative hairpin drops from a clear sky – but everyone involved struggles hard to make sense of the nonsensical.

McCarthy is brash. Haddish is charismatic. Moss is ironical. Indeed, you could just about persuade yourself you’re having a good time until – as too much Fleetwood Mac continues to play – the picture splutters to one of the most inconsequential endings I can remember.

“Is that it?” the audience mouthed semi-silently. The rolling credits say it is.

What we need now: A primer in an all-consuming and fast-moving crisis
7