Why does time fly? Maybe you’re not paying enough attention

Unthinkable: There are number of plausible theories of time, says Sean Enda Power 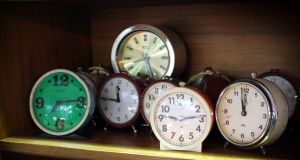 ‘Experienced change over clock time is like stepping over stones. If you run, each step crosses more stones.’ Photograph: Bryan O’Brien/The Irish Times

Where did the summer go? That’s not an easy question to answer if you’re a philosopher like Sean Enda Power.

There is, first of all, the experience of summer’s passing. Did it crawl or fly past for you?

Then, there’s the more abstract question of what has, in fact, happened to time past. Has the summer ceased to exist? Or does it remain, in some sense, real?

Many people get on with life merrily ignoring such conundrums but Power - author of Philosophy of Time and Perceptual Experience (Routledge) - is made of more stubbornly curious stuff.

Power says there are a number of plausible, yet entirely contradictory, conceptions of time. Each comes with its own scientific and moral implications.

Two theories which stand out are “presentism” and “tenseless theory”, he says. “Presentism states that only present things are real. The event of you reading this is real, but the sun’s death and dodos are not real. Tenseless theory denies that only present things are real. Anything at any time is as real as anything at any other time - your reading this, the sun’s death, or dodos.

“For tenseless theory, the past, present, and future, are like ‘here’ and ‘there’. If I am here because ‘here’ is my garden, and you are in another garden, then you aren’t here but there. But pick your garden, and I’m there, you’re here. Or, pick our city, and we’re both here. None of this means I’m real and you’re not, or vice versa.

Got that? Strap in for the ride as Power is this week’s Unthinkable guest.

Which theory of time should we accept? The one that’s best for our mental health?

“Events we experience seem real and present. However, these events occur at separate times. For example, when we see the stars Sirius and Betelgeuse together in the sky, Sirius shines six years ago and Betelgeuse shines 660 years ago.

“It also takes time for these events to stimulate our senses, and for our brain to process the stimulation.

“For example, I gesture at the constellation Orion while hearing distant surf. Orion seems real and present. So does my gesture and the boom of the surf. They all seem to be happening at the same time. However, by the time of the stimulation and neural processing, these events are at earlier and separate times.

“Now, my experience is that all these events happen at the same time. My experience is wrong. All theories must accept that. But, for tenseless theory, experience’s only mistake is to not detect the times between events.

“For presentism, experience is further mistaken - events seem present and real, yet they’re past and unreal.”

Can we trust our experiences?

In the book, you explore further the relationship between time theory and whether we can trust our experiences. If I was to see a ghost could I use knowledge about time to test whether the sighting was real or not?

“Whatever they are, ghosts do seem to be things in the world. They might just be figments spun from our mind - hallucinations. But they don’t seem like this. In my book, I explore another possibility arising from hidden time.

“In some cases, what seem to be ghosts are things from long ago. It is possible that, when we seem to experience such ‘ghosts’, we do experience them. However, we’re unaware of the duration between their time and now.

“For example, you see your passed grandmother sitting near you. You do see your grandmother. She is real. She is even present - in a long present, like the big ‘here’ of a city.

“But it’s not her spirit sitting there when you sit there. She is sitting there at a different time, when you were once with her. It just took a long time in your neural processing before you could see her. Again, this only works with tenseless theory. For presentism, your grandmother is unreal and cannot be present.”

Does time actually fly when you’re having fun?

Talking of illusions of duration, is it possible time actually flies - or speeds up - when you’re having fun?

“Some contemporary psychologists, such as Marc Wittmann, argue that experienced time is a measure of emotional change - against some standard measure, such as clocks. If that is true, then time may fly because your feelings change less often.

“But that speeding up isn’t always because of fun. I once worked as a security guard in London - eight hours a night, on my own. The hours dragged. However, the moment my replacement arrived, it felt like those hours had flown. The night shift wasn’t fun, even on recollection.

“My current thought is that time flies when life requires little attention. Time slows when you are attentive.”