Joanna Hogg: Back to the 1980s – without the rose-tinted lens

The director on her semi-autobiographical new film The Souvenir, starring her friend Tilda Swinton’s daughter, and how Batman stole her leading man Robert Pattinson 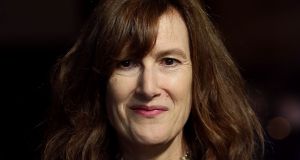 Joanna Hogg: ‘I didn’t want to fetishise the shape of a glass or whatever. I wanted it to be about the story and not about the interior decoration’ Photograph: Danny Martindale/Getty Images

Golly, it’s been nearly a decade since I last met Joanna Hogg. In 2010, I hosted an enthusiastic Q & A after the screening of her film Archipelago at the Dublin International Film Festival. She’s gone a bit quiet since then. Exhibition emerged in 2013. Now, we get the excellent The Souvenir.

“It’s many things. Mainly me and recovery time – getting to the next idea,” she explains. “I am just not as fast as some film-makers. I am taken aback that somebody like Woody Allen can make one a year. I don’t know how you regroup that quick. There is a lot of digging very deep in between. I am always working on ideas.”

There are few kinder things you can say about a film-maker than that they developed their own unique space. Since her move from episodic TV to features with Unrelated in 2008, observers have been struggling to assign influences to Hogg. There’s a bit of Bergman in there. You can catch a whiff of Pinter when the wind’s in the right direction. But that sub-zero intensity is very much her own.

The awkward aesthetic reaches its height with The Souvenir. Honor Swinton Byrne, daughter of Tilda Swinton, plays a young film student who, in the 1980s, falls for a posh civil servant with a Class A drug problem. Tom Burke is the dangerous suitor. Tilda needed little rehearsal to play the protagonist’s mum.

Hogg seems resigned to ploughing through the inevitable queries about how much of the story emerged from her own experience.

“Before I started doing any publicity I wondered would I say it’s autobiographical,” she says. “Then I thought it would be ungenerous to not say that. Because I am hoping that it touches some people. So for me to disown it would not be magnanimous. How would I talk about it? I can only talk about it in relation to my own character. The truth is the character I had a relationship with in my early 20s was a mystery. He is still a mystery.”

A drily amusing person with a healthy line in self-deprecation, Hogg was happy to let go of her past during shooting. Burke and Swinton-Byrne teased away at the sparse dialogue (Hogg writes only outlines, rather than conventional scripts) to put some distance between the characters and their inspirations. Yet she did pass on a recording of her ex-boyfriend to Tom Burke.

“He could never have known exactly who this person was,” she says. “Yet from the recordings and photographs he managed to bring some of that character to life.”

People can make films on their phones now, but back then you could make films that didn’t cost much on Super-8

Pondering the process, I am reminded of a very different film. Thirty years ago, Bruce Robinson pieced together his own time as a struggling artist – and his relationship with a dissolute upper-cruster – for Withnail and I.

“Oh really? How interesting. I love that film,” she says.

Both films approach their respective era with a cautious step. Neither is exactly nostalgic.

“I am glad that you felt I didn’t indulge in nostalgia,” she says. “I didn’t want to fetishise the shape of a glass or whatever. I wanted it to be about the story and not about the interior decoration. Everyone is a bit into the eighties now. Music was a good way of allowing the times to seep into the film.”

Those were difficult times. But, in some ways, the current era is harder for film-makers. It’s more difficult to be poor. There’s more pressure to get ahead and make cash.

“People can make films on their phones now, but back then you could make films that didn’t cost much on Super-8,” she says. “That’s what struck me: how rich a time it was and how many possibilities there were.”

Raised in comfortable Sevenoaks, daughter of an insurance broker and a stay-at-home mother, Hogg attended boarding school before finding work as a photographer’s assistant and then attending the National Film School. The legend goes that an early meeting with Derek Jarman helped her along the way. Tilda Swinton, a mate for decades, was part of the same set.

“I am always slightly embarrassed when people say that,” she says. “He did have an impact, but I wouldn’t say I was one of his film-makers. He did encourage me. It was brief. I first met him because I wanted to work on Caravaggio, but it was some years before he actually made that. He was still a great influence.”

There was a feeling of needing to get more experience with the nuts and bolts, working with actors and so on

Like the protagonist of The Souvenir, Hogg worked for a while on an ill-conceived project set among working-class communities in the north-east of England. She spent six years in film school and made videos for musicians such as Alison Moyet. In the early 1990s, she moved towards TV and ended up carving out a lucrative career directing shows such as Casualty, London’s Burning and EastEnders.

“There was a deep feeling of needing to get more experience with the nuts and bolts, working with actors and so on,” she says. “It was a learning experience. But I don’t exactly think of that time in a positive light. On the other hand, if I am in a situation like now and I am up against it, that helps you. If you have half an hour to shoot a scene that helps you pull it out of the bag.”

She could have kept at that grindstone forever, but, in 2008, she finally got back to features with Unrelated. As well as announcing Tom Hiddleston to the world, the picture framed Hogg as a vital talent for the new millennium: focused, ironic, unsentimental. Yet it took over a decade for her to process that early romantic encounter into The Souvenir. It’s her best film yet.

“I probably just needed to make those other films first,” she says. “I wasn’t convinced that I had an interesting enough perspective on it. There was that gap after Exhibition and it came to me: it was time to make it.”

Following an ecstatically received premiere at Sundance (“Beautifully harmonised performances,” Justin Chang of the LA Times raved), Hogg set to work on shooting The Souvenir Part II. The story follows on directly from the current film. So a glance at the bio above may offer a few spoilers.

“I may have shot it, but I don’t know what shape it will take,” she says intriguingly. “It focuses on Julie who’s still at film school. I was at film school for six years, which is much longer than I should have been. It’s about what happens when somebody loses someone early in life.”

There is actually no male lead in Part Two. I reinvented the characters after Robert wasn’t able to do the film

We know two interesting things about the production. Firstly, she lost Robert Pattinson – determined supporter of independent film – shortly before the production ground into action. I’m guessing his roles in The Batman and in Christopher Nolan’s Tenet did for her.

“Batman and Christopher Nolan, ” she says with tolerant sigh. “I was looking forward to working with him and we spent a lot of time talking about the part. Anyway, I had to move on and I am very happy with my casting. There is actually no male lead in Part Two. I reinvented the characters after Robert wasn’t able to do the film.”

He really does make an effort to do good work.

“I know. He makes such exciting choices and we are very keen on doing something together.”

We have also heard that Ed Guiney, Oscar-nominated founder of Dublin’s Element Pictures, is coming on as a producer of the second film.

“Yes, Ed and I were planning other things together,” she says. “Part One was made through my own production company. But Part Two was always bigger. It always had more moving parts. So that seemed the time to work with Element.”

We are counting the hours to its completion.

The Souvenir is released on August 30th

‘How happy he was’: Candid David Bowie photographs by his childhood friend Geoff
8