Irish actor and producer named among rising stars in Britain 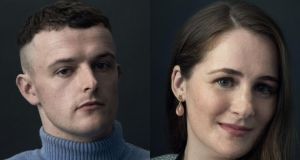 While you might not expect to find any Irish people on an initiative named BAFTA Breakthrough Brits, the British academy has named Young Offenders actor Chris Walley and film producer Fodhla Cronin O’Reilly, as two of their rising stars.

“It means a lot to me to be part of the Irish contingent,” says Walley, who grew up in Glanmire, Co Cork. “I feel so honoured. The people who have passed through this programme are people I admire hugely.”

Walley (23) and Cronin O’Reilly (32), from Co Kerry, are among 19 honourees from the worlds of TV, film and games who will be celebrated at a reception on November 7th at the BAFTA headquarters in Piccadilly, London.

“I’m a proud Kerry woman,” says Cronin O’Reill, who has her own Bafta-nominated production company Sixty Six Pictures. Her break came in with 2013 when she was nominated for a best animated short film Oscar with director Timothy Reckart for Head Over Heels. Her debut feature film Lady Macbeth, was nominated for three Baftas in 2018. Next year she’ll be back in Kerry producing a film with Screen Ireland. “We work with British and Irish talent and I’m so grateful that I’m able to come home to tell distinctly Irish stories.”

Walley’s star has been on the ascendence since he was a teenager. He attended the prestigious Royal Academy of Dramatic Art (RADA), gaining one of 28 places ahead of 3,500 other applicants. This summer, he was given permission to quit his studies early when he landed his first West End role in The Lieutenant of Inishmore, alongside Aiden Turner.

“I’ve always been ambitious,” Walley says. “I’m fortunate that I knew what I wanted to do from the age of 10. I used to send emails to casting directors when I was 12 saying, ‘Can you meet me for a coffee and I’ll do a monologue for you.’ I must have sounded deranged.”

While there are no actors in his family, he’s not the first one to gain recognition. His great-grandfather was tánaiste William Norton. “That’s something I’m very proud of,” he says.

Walley’s big break came with The Young Offenders, in which he plays an amateur criminal with a questionable haircut. “I still find it mad to think how successful that film was,” he says. The Irish production, which was made before Walley went to RADA, broke box office records and was followed by a BBC series of the same name.

He and his Young Offenders co-star Alex Murphy have remained good friends. “When we’re out together in Cork walking around with these stupid haircuts, it looks like we’re trying to be recognised,” he laughs. “But as soon as I grow my hair back, no-one recognises me at all.”

Walley has the same level of admiration for his Inishman co-star, fellow Irishman Aiden Turner, best known for his role in Poldark. “What’s so cool about Aiden is that the fame will never go to his head,” says Walley. “He shies away from that stuff, he’s a lovely man and a fantastic actor. I learned a lot from him.”

Cronin O’Reilly studied film at St John’s College, Cork, and gained work experience at Ardmore studios in Bray before moving to London aged 18. Her upbringing inspires her work. “I come from a big Irish family where people experience life together,” she says. “Film is a shared experience and storytelling is something that has driven humans forever. I can’t help but want to contribute to that; it’s part of my DNA.”

Both producer and actor are never away from Ireland for too long. “I flew back about seven weeks ago to film a Christmas episode of The Young Offenders,” says Walley. “I was looking out of the plane over Cork thinking how I knew everywhere. In Ireland, I definitely feel like I’m a part of things.”