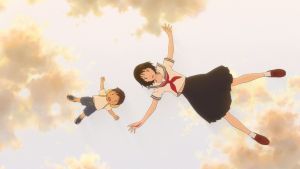 Among anime fans, a new film from Mamoru Hosoda is a cause for celebration. It’s high time people from outside that community paid more attention. Inspired by the birth of his second child, the director of The Girl Who Leapt Through Time, The Boy and the Beast, and Wolf Children, has crafted this wonderful time-travelling adventure with a four-year-old protagonist at the centre.

Pre-schooler Kun lives in his beautifully designed home (designed by Japanese architect, Makoto Tanijiri) with his architect dad, his mum, and his toy trains. Additional adoration is provided by his doting grandma (Miyazaki Yoshiko) and the waggly-tailed family dog, Yukko.

This toy-strewn idyll is shattered by the arrival of Mirai, Kun’s new little sister, who makes constant demands on his now permanently sleep-deprived parents. The little boy is so enraged by the usurper that he smacks her with a train. Luckily, the house slopes gently toward a small enchanted garden where Kun encounters Mirai of the future, who guides him through this terrible time. She’s joined by other relatives, including Kun’s great-grandfather, and by Yukko, reimagined as a shaggy royal.

In The Boy and the Beast, Mamoru Hosada mined martial arts and an elaborate underworld to explore the idea of shared fatherhood; in Wolf Children, werewolves allowed the director to examine protective parenting. The temporarily strained family at the heart of Mirai (sometimes called Mirai of the Future) is expanded by Kun’s pre-school view into a dramatic crisis. A crucial scene at a train station, enlivened by a scary bullet train (courtesy of Hideo Shima, the designer of Japan’s bullet train) is almost heartstopping but the film is never so intimidating that it won’t charm audiences from Kun’s age and up.

Viewers who are either too young or too impatient for subtitles are advised to check their local listings: some Irish screenings will feature the original voice cast, others are English dubbed by John Cho, Rebecca Hall, and Hawaii Five-O’s Daniel Dae Kim.

The pandemic has split us into two distinct camps: The Couples vs The Singles
6