‘When I was growing up, it was, if you’re Irish you’re a terrorist’ 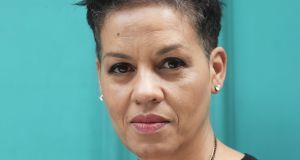 Kit de Waal: ‘Wexford would have been what my mother thought of as the big town, where everything happened’

When I arrive at Kit de Waal’s she’s in her writing cabin in the back garden of her house in Leamington. De Waal gets a kick out of using the no-frills Leamington while the locals insist on its full title:Royal Leamington Spa. No surprise, really, as though outwardly seeming to have fallen far from the tree in this wealthy, white, middle-England town, this author holds tightly to her roots; Brummie, Irish, West Indian and working class.

De Waal has been at the forefront of a wave of authors and literature organisations trying to attract attention to the lack of working class voices in the UK publishing industry. She is the force behind Common People: An anthology of working-class writers, a collection of essays, poems and pieces of personal memoir, bringing together 16 well-known writers from working class backgrounds with an equal number of brand new as-yet-unpublished writers from all over the UK (whispers of an Irish version next). An author who also puts her money where her mouth is, de Waal used some of her six-figure book deal to set up the Kit de Waal Creative Writing Fellowship offering a paid place on an MA at a London university to a writer from a disadvantaged background. Her own background is a far cry from her life now, “My mother would clean the local laundrette in the evening when it was closed and we would all have to go with her to help. She would do our washing while she was there, and my bother would climb down behind this huge roller used for ironing to look for sixpences that been dropped by people using the machines.”

If you want to know more about de Waal’s roots you only have to read her work. Her debut novel, My Name is Leon, is about a young boy caught up in the care system in Birmingham where de Waal grew up and stems from her background working as a magistrate who sat on adoption panels. She used to advise social services on the care of foster children, and has written training manuals on adoption. Leon also explored her mixed-race background. De Waal says; “I concentrated on that part of my identity. As a mixed race person, I knew how Leon felt, with a white mum and a black dad, and being different. I remember 1981, the race riots, and I identified with the back men feeling like they had no agency.”

In her follow up, The Trick to Time, de Waal explores her Irish roots. The story centre’s around Mona, an Irish girl, from Kilmore Quay, a seaside town in Wexford. At 17, Mona moved to Birmingham, England and fell in love with an Irish boy from Galway. Something bad happened to Mona the night of the Birmingham pub bombings in 1974, and as the novel begins, three days shy of Mona turning 60; “Mona realises she can’t go any further with her life until it’s put right. If you want to know what that thing is you have to read the book.”

Kilmore is somewhere de Waal thinks she went to as a child, “but I can’t find proof!”, she says. Her mother hailed from Campile, “Wexford would have been what my mother thought of as the big town, where everything happened.” Moving to Moseley, Birmingham, in 1920s, part of a large Irish Catholic family of eight brothers and sisters and a mountain of Irish cousins. De Waal remembers that her grandmother’s Irish accent was so thick, you could just about understand her and that she was known for taking in Irish labourers as lodgers. “The Irish that we knew we all labourers, childminders, cleaners and where we lived, there was the Irish shop, church, community centre, pubs and, to a large extent, people lived as though they were in Ireland, and stuck to their community. With my father being West Indian, we were an anomaly, we were brown, so we were both in and out of that Irish community.”

During the Birmingham pub bombings in 1974 de Waal was just 14 when she saw firsthand just how tragic those terrible events were. She also saw how the Irish community in Birmingham was treated in the aftermath, “Rather like the Muslim community are now, tarred with the same brush as the bombers. Now it’s if you’re Muslim you’re a terrorist, but when I was growing up, it was, if you’re Irish you’re a terrorist. And, even if it wasn’t said to you, it was hinted to you that, if you were Irish, your sympathies were with the IRA, Irish people were murderers.”

Being mixed race, de Waal didn’t look Irish so she escaped people’s wrath but her Irish uncles, cousins and friends didn’t. The Trick to Time deals with something that happened from the racism that was a result of the bombings that changed Birmingham massively and the good news is that though things were very bad for a while de Waal tells me that relations between Brummies and the Irish have been repaired.

I asked de Waal about her special relationship with Ireland, which seems to have taken her to its heart, with Leon winning the Kerry Group Irish Novel of the Year 2017, “I love Ireland,” she says, “Going back to where my family are from. And that feeling of going to what feels like the edge of Ireland, like the edge of the world. I’ve been two or three times on research for the book. I love the west coast, Kerry, Mayo, beautiful. I love that feeling when you look out to sea and you know there’s nothing between you and America. And that special, special light, especially up around Galway.”

I wondered with all the success of Leon if de Waal had felt pressure on The Trick to Time, if she’d gotten “second album syndrome”? It turns out, as publishing deals often do, her contract was signed in Jan 2015 and Leon didn’t come out until June 2016 and she wrote The Trick to Time in that year and a half with no idea Leon was going to be a success. The Trick to Time was written with no pressure. “Now, though, I feel the pressure massively. The book has just come out. What are people going to say? How am I going to deliver on the emotional impact Leon had on people? You hope that the same readers who loved Leon will love Mona.”

With The Trick to Time longlisted for the Women’s Prize (formally the Bailey’s Prize) before it had even hit the shelves and the initial reviews in and overwhelming positive, de Waal can think about her next work. She is currently working on a short story collection, Supporting Cast. It’s stories are about five of the B-characters from Leon and five from The Trick to Time. Some are backstories of the characters while others are “what happened next”. “I’m in my comfort zone as it’s my thing, my training, if you like, before I became a novelist. I think it’s every writer’s dream to write a short story collection.”

Beyond that, “My secret dream is, I hope live in Ireland one day.” Safe to say de Waal would be welcomed with open arms in Ireland should she decide to turn her fictional exploration of her roots into reality.

The Trick to Time is published by Viking and is the Irish Times Book Club book for May. Kit de Waal will be appearing at the International Literature Festival Dublin on Saturday, May 26th. ilfdublin.com

Paul McVeigh’s novel The Good Son is published by Salt