Is there a right to life? (You mightn’t like the answer) 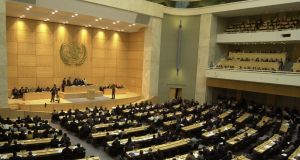 The UN Human Rights Council in Geneva: All rights depend upon the existence of an assembly of people to affirm them. Photograph: Jean-Pierre Clatot/AFP/Getty Images

The abortion referendum campaign has been characterised by an emphasis on telling people’s stories rather than engaging in theoretical dialogue.

That may be a tactical decision – as psychological studies show people are more likely to respond to emotional stimuli than intellectual ones. But it’s also perhaps a mature acknowledgment that disagreement is inevitable, and there’s no single, knock-down argument to obliterate all legitimate opposition.

Some arguments on abortion have traditionally been more influential than others. The philosopher Judith Jarvis Thomson produced one of the most memorable thought experiments over 40 years ago when she asked how much responsibility should you bear for sustaining the life of someone who had plugged themselves into your bodily organs without your consent.

People who are opposed the legalisation of abortion tend to use, as their dialectical trump card, the argument that one can’t prove with 100 per cent certainty that the foetus is not a person.

But, then, can we prove anything in the moral sphere with 100 per cent certainty?

Trinity College Dublin emeritus professor John Dillon believes absolutism should be avoided. In particular, he says, it is “dangerous nonsense” to assert that the embryo has an unconditional right to life which is “independent of any human decision to grant it, and prior to, and independent of, the dogmas of any religion or sect”.

While rights purport to be inalienable, they have always depended upon the existence of an assembly of people to affirm them. What Dillon calls the “systematic ambiguity” surrounding the concept of rights must be borne in mind by anyone playing the “rights card” – whether on abortion or any other issue.

As this week’s “Unthinkable” guest, Dillon, who is an authority on the philosophy of Plato, sets out to answer perhaps the most fundamental question of ethics.

Is there a right to life?

“A suitable response to this, I think, is ‘yes and no’. It seems to me important, as the debate on the Eighth Amendment heats up, to clarify what we think the status of a ‘human right’ is.

“The opponents of repeal, and of consequential legislation on abortion, have unhesitatingly assumed that there is such a thing as a human right floating about in the atmosphere, as it were, like a Platonic Idea, independent of the decision of any society to establish it in law, and their opponents have not, I think, challenged this assumption sufficiently, if at all.

“But this assumption should not go unchallenged. We have become hypnotised, in the modern world, by the concept of civil, or human, rights, ranging from the rights to life, freedom and the pursuit of happiness, through freedoms of speech, assembly, education and information, and going on, in the minds of an ever-increasing number of citizens, to the notion of various forms of free lunch.

“There is nothing much wrong with that, perhaps, as long as it is recognised that these rights are in the nature of man-made social contracts, drawing what validity they possess from the will of the group, organised or otherwise, who propounded them, and that they do not subsist in and of themselves . . .

“Neither the born nor the unborn can have any rights whatever which some body of citizens, formally gathered together, have not resolved to give them, and no such rights have as yet been explicitly granted by the Irish nation to embryos, any more than to future generations as yet unconceived.

“If the Irish nation resolves to grant this new right to Irish embryos, then it will become a right which Irish embryos will have; but let us not imagine that this right inheres in them, and that it is only for us to recognise its prior and transcendent existence.”

You say rights are given and thus can be taken away. But in the tradition of human rights isn’t there an assumption of inclusivity, whereby a human right – to life, for example – is extended across genders, age brackets and races? Surely, the burden of proof then should fall on those who say a particular category of being does not have the right to life?

“Yes indeed, a ‘human right’ should extend equally to all humans, but that need not be extended to potential humans, such as an embryo is, unless special provision is made for that by legislation. Being a potential x qualifies you to enjoy rights pertaining to x when you become an actual x, and not before.”

Which rights should be in the Constitution as a rule, and which should be amenable to change through legislation?

“I don’t see that that can be specified precisely, but common sense suggests that articles of a constitution should be confined to matters of basic significance for the state as a whole…

“Certainly it would not be inappropriate to include a prohibition on abortion in a constitution, if that is ascertained to be the will of the people - as long as it does not acquire thereby some sort of timeless and infallible validity.”

Plato would not be impressed by the nature of our civic dialogue – but then he was rather anti-democratic. Is the language of rights ultimately a help or a hindrance to moral deliberation?

“Well indeed, Plato was no great admirer of Athenian democracy as he knew it, but on the other hand he had developed no idea of a system of transcendent rights inherent in the human being as such, independent of any duly constituted body enunciating such rights. He does have some concept of a ‘Law of Nature’ , which involves such precepts as ‘doing as you would be done by’, but that is not of much assistance in the present context.

“As for the language of ‘rights’, it seems to me that that is perfectly helpful, so long as the nature of those rights is duly delimited.”

Question: Is choice in itself good?

Mary Wollstonecraft replies: “Independence I have long considered as the grand blessing of life, the basis of every virtue.”