Cannes 2018: Some very fine films amid a sense of transition

Protests, Directors’ Fortnight and the race for the Palme d’Or 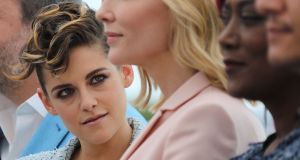 Kristen Stewart looks at Cate Blanchett ahead of the opening of the 71st edition of the Cannes Film Festival in Cannes, southern France. Photograph: Getty Images

At lunchtime on Sunday, torrential rain swept its way in from the Mediterranean to drench those squabbling in queues outside various bits of the Cannes Festival. Had the event gone disastrously then we could have made jokes about biblical portents. The darkness was, briefly at least, of Old Testament levels.

The event hasn’t gone disastrously. There have been some very fine films. The red carpet still attracts its share of spotlight-hungry narcissists. Mind you, this year the snappers have been paying as much attention to the jury as to the stars of the films. We wondered if placing Ava DuVernay and Kristen Stewart round the table would win the Twitter war for Cannes. It seems that it has.

For all those successes, there is unquestionably a sense of transition about the place.

Nothing represented that better than Saturday’s high-profile protest against the lack of female representation in cinema. Cate Blanchett, president of the jury, was joined by 82 women – one for each of the female-directed films to compete for the Palme d’Or in 71 years – in a vigil before the premiere of Eva Husson’s Girls of the Sun. Blanchett and Agnes Varda, pioneering director of the Nouvelle Vague, read out a statement urging for safer working conditions and greater equality of opportunity for women. Jane Fonda and Salma Hayek were among those joining jury members on the steps. Cannes moves slowly. But it is being kicked towards understanding.

Opinions differed as to whether the films by women in the main competition – we’ve seen two of three so far – have done enough of their own kicking. Girls of the Sun, a story of female Kurdish guerrillas, was warmly cheered in the auditorium, but the critics were (for once this is not a euphemism) divided. To me it seemed contrived, clunky and occasionally ludicrous. A white French journalist is introduced to help western audiences digest the tale and then largely ignored until a sentimental coda. The women’s back stories, though believably tragic, are told in flat, boring flashbacks that go exactly where you expect.

Alice Rohrwacher’s Happy as Lazzaro will please fans of her trademark rural oddness, but, like the same director’s The Wonders, it has a randomness that shouts of “magic realism” can’t quite explain away. The set-up is unreservedly marvellous: a tobacco baroness keeps a party of peasants in serfdom and refuses to allow them access to the modern world. Several things happen which push the story into still weirder places without those things fitting together into anything you could sincerely call a narrative. It is, nonetheless, a beautiful film with moments of real profundity. In the year that’s in it, Happy as Lazzaro could conceivably win the Palme d’Or.

As ever at this event, buzz about promising films gets into your skin before you’ve actually registered hearing the project mentioned. The early chatter at the 2018 festival was about the opening film in the 50th edition of the funkier Directors’ Fortnight. The organisers of that strand, conceived in the aftermath of the cancelled 1968 festival, have, indeed, chosen well with their throat-clearing presentation. Ciro Guerra, director of Embrace of the Serpent, has teamed up with Cristina Gallego, his wife and producer, to direct Birds of Passage, a singular folk epic concerning a family of Colombians who get dragged into the business of exporting marijuana to the US. The picture manages the tricky feat of working ancient myth in with very contemporary concerns. Entho-gangsta cinema has never seemed so vibrant.

Inevitably, punters were wondering why that film ended up in Directors’ Fortnight rather than in the race for the Palme d’Or. Perhaps Guerra and Gallego wanted it that way.

At any rate, a few early bets in the main competition haven’t paid off as the programmers might have hoped. AB Shawky’s Yomeddine, a rare first feature in the Palme d’Or race, could, if we were feeling mean, be glibly described as Miramaxy. This is to take nothing from the charming performance by Rady Gamal as a Coptic leper travelling across Egypt to find his family. But it has all the trademarks of the cute foreign-language crossover film: donkey, muddy-faced child, eccentric locals.

Your correspondent was one of several who noted that Yomeddine would have sat more comfortably in the Un Certain Regard sidebar. The programmers could have done a straight swap for another debut feature: Lukas Dhont’s Girl. That Belgian film offered a deeply moving study of a teenage ballerina enthusiastically embracing her sex reassignment surgery. Victor Polster’s performance is faultless, though distributors may meet objections to the film-maker’s choice of a cis male in the title role. The debate will probably do Girl’s prospects no harm at the speciality box office.

Many highbrow critics rolled over for Jean-Luc Godard and allowed their tummies to be tickled. Fifty years after helping to close down the festival, the old devil was back with a jarring, ear-mashing essay entitled The Image Book. You know the sort of thing by now. Bits of Dostoevsky are grumbled over grainy footage from classic films and grainer footage of imperialist atrocities. Godard’s greatest contribution this year was surely his appearance at a Facetime press conference. He must have loved that the photo call involved his cinematographer holding an iPhone aloft for the snappers. Give him a prize for that.

Also winning the self-promotion wars was the perennially awkward Gaspar Noé. The French director promoted his new film (sigh) Climax with a poster appealing to those who “despised” “hated” and “loathed” earlier pictures such as Irreversible and Enter the Void. When I eventually get to Climax I will make a point of finding it ho-hum.

There was more impressive work from Jafar Panahi, currently detained by the authorities in Iran, with his typically neat, delicately incisive 3 Faces. The film uses deceptively simple techniques to tell a story that gets deep into patriarchal hangovers in contemporary Iran. Given his current situation, he is sure to get some sort of prize.

The most impressive film in competition has, however, been Pawel Pawlikowski’s Cold War. The Polish director, long resident in the UK, can hardly be called “young” at 60. But his sensibility feels fresh, energetic and original. Following on from his Oscar-winning Ida, Pawlikowski has, working again in black and white, told us a story about two Polish artists – a sombre male musicologist and a free-spirited female singer – who fall bitterly in and out of love while looking gorgeous in Warsaw, Berlin, Paris and Split. Somehow or other, it comes in at a breathtakingly economic 88 minutes. Every one of those minutes is packed with elegance.

The famous critics’ grid at the back of Screen International – which scores the competition by major reviews – currently places Cold War in joint second place alongside Jia Zhang-ke’s excellent Chinese epic Ash is the Purest White (the films share many themes, come to think of it). But Godard is currently out ahead on the grid. It would be a laugh if he won his first Palme d’Or at 87. But I’m sorry. That isn’t going to happen.

Mind you, those clouds really do look portentous.

Five films still yet to come

The busy director of Cannes hit Do The Right Thing tells the serio-comic story of, yes, a black cop who infiltrates the Klan.

He’s here. The film is here. But it’s not officially in competition. Matt Dillon stars as a serial killer.

The windy Turkish film-maker – who won the Palme d’Or for Winter Sleep – is back with another epic talkathon.

It’s here. It’s going to boss the red carpet. It will be just like the old days.

The director of the wonderful Caramel, which premiered here in 2007, is back with a film about a boy who sues his mother for bringing him into a world of pain.