Gaz Coombes: On My Culture Radar

Singer on how David Hockney inspired his album artwork, and the energy of New York 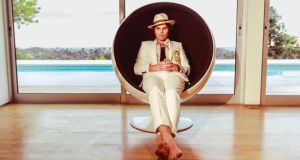 Gaz Coombes: “I like Adam Buxton’s podcast, he’s got this natural enthusiasm and warmth.”

My wife works in a bookshop and she’s always bringing books home. Last year, Grayson Perry’s autobiography The Descent of Man was hanging around the house so I picked it up. It was really enlightening and beautifully written. Every young man should read it; it might free up some pressures. I also enjoyed Neil Young’s autobiography Waging Heavy Peace. I love Neil Young’s attitude, he’s beautifully cantankerous and a creative inspiration.

We’ve stayed down in the Driftwood Hotel in Cornwall for years, it’s in a beautiful spot by the cliffs and the food there is insanely good. I couldn’t eat like that every day because it’s so rich, but it’s wonderful – it’s modern English, with a lot of seafood of course. Over the years I’ve got to know Chris Eden, the chef, and during the course of our visits, he managed to get himself a Michelin Star. It’s been lovely to watch his growth.

I feel the pull of New York. It’s the best city to see amazing art and eat good food. I was over there a few weeks back doing some gigs and there’s something about it, when I wake up in the morning I get this buzz. Even from the first days of Supergrass, the New York shows had this electricity. Maybe it’s because all the celeb friends and the like would be there, and it would be a chaotic, mad one. I tend to stay at the Ludlow Hotel in the East Village and it’s a cool place to hang out. It’s not a really mind-blowingly pricey part of New York, it’s still a bit raw. I’d love to take my kids over there.

The best comedian is my pal Rob Rouse. I’m very biased, because he’s a really good friend of mine. He’s been in Upstart Crow with David Mitchell and he does stand-up as well. He’s a really funny man, he’s got it in his bones.

Last year I went to the Pompidou Centre in Paris because David Hockney took his exhibition to Paris. It was beautiful, it was a pleasure to walk around and see these paintings. You don’t realise how big some of them are when you see them on a computer screen – the first thing that struck me when I walked into the room with A Bigger Splash was how big and impressive it was on the wall. That inspired the artwork for World’s Strongest Man.

I’m listening to Shame’s Songs of Praise. It’s good to hear a young band sound raw and honest, and without any pretence. It reminded me of that feeling of freedom when Supergrass first started out aged 16 or 17.

I like Adam Buxton’s podcast, he’s got this natural enthusiasm and warmth. I know him fairly well, I’ve worked with him on a few things. I might send him a message, see if he wants to have a chat . . .

Save Me was really powerful; Lennie James is really watchable. My wife doesn’t watch The Walking Dead but she caught a bit the other day, and she remarked how different he was in it. My wife and I appreciate gritty English stuff like This is England, and Mike Leigh’s work.

Most of this year’s Oscar season films were good, but not great. Even Three Billboards Outside Ebbing, Missouri had great performances but I, Tonya and Get Out were the two I thought should have won more awards. Allison Janney’s performance in I, Tonya was stunning, it was very committed and quite shocking. The pacing was kooky too. I warmed to it, and I wasn’t quite expecting that.

World’s Strongest Man is out now. He plays The Academy, Dublin, on May 25th.

Pinocchio: A gorgeous but dark and unsettling reworking
9 Welcome to the child sex capital of Europe
Real news has value SUBSCRIBE