Virtual culture to enjoy in the week ahead 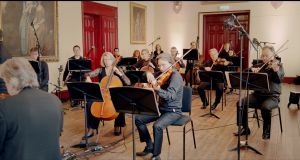 “Initially, we were disappointed it would not be possible to host a live festival at Clandeboye this year,” says Barry Douglas, pianist and artistic director of Camerata Ireland. “However, we were determined to use this time to create something new, something special that encapsulates Beethoven’s spirit of creativity and ingenuity.”

During other Augusts, Camerata Ireland, the chamber orchestra founded by Douglas, returns to Clandeboye Estate in Bangor, Co Down, for the international music festival in the 19th century grounds. Having cancelled this year’s live festival due to Covid-19, they present Clandeboye At Home: Beethoven 250, an online edition of the festival, featuring Ireland’s first socially-distanced orchestra.

The project was spearheaded by Belfast-born pianist Barry Douglas, who performs as soloist and conductor. Of performing together socially distanced, he said “there were a lot of practical considerations to be made to ensure everyone’s safety: 2m spacing between each player, making face masks available, and of course, liberal applications of hand sanitiser. The socially-distanced layout felt slightly unusual to begin with but we quickly relaxed into the joy of making music together once again. The result is really quite special, and we’re excited to share the finished product with audiences.”

For Camerata “Beethoven holds such a special place in our hearts. We regularly play his music all over the world, and always relish in how it transcends barriers and creates connections. It’s vivacious, intense, and powerful, but also has a strong sense of personality and charm. During this difficult and testing period, many of us have been turning to art and music for comfort. We hope that our online Beethoven series will give audiences all over the world a sense of connection and joy during this isolating and difficult moment in time.”

The festival will be on camerata-ireland.comAugust 18 - 22, then available on demand. barrydouglas.com

Virtuoso guitarist Dave Flynn’s residency in Dún Laoghaire started during lockdown, on May 12th, so it took an unusual form. It culminates with the online world premiere of Dún Laoghaire Guitars, his new composition, where he’s joined by students from the Guitar Training Centre in Dún Laoghaire, on the Dún Laoghaire Rathdown County Council (DLRCC) and Music Network’s social channels on Thursday, August 20th, at 7pm.

His is the first of three musicians-in-residence for 2020 (a scheme funded by DLRCC and the Arts Council, and managed by Music Network) and because of the coronavirus crisis he’s been collaborating online with guitar centre musicians and their tutor Ciarán Swift to compose the guitar ensemble piece in two movements, Dún Laoghaire Dart and Dún Laoghaire Harbour, for which Flynn recorded himself overdubbing eight guitars, “creating almost orchestral textures”.

Flynn works across several genres and has toured worldwide; he was the first composer-in-residence at Farmleigh and recently premiered the ground-breaking The Vision Symphony by the Irish Memory Orchestra and 26 blind/vision-impaired musicians in glór.

Flynn recalls: “When I was a teenager I regularly took trips into Dún Laoghaire town. The sounds I heard by the harbour and train station formed a musical picture in my mind that I vowed one day to turn it into a piece of music. That day arrived when I was appointed Dún Laoghaire-Rathdown musician in residence.” It was intended to premiere in concert at the DLRCC Lexicon Studio, and they still hope to live concert premiere, but in the meantime it’s online (YouTube: Music Network Ireland Davefcomposer; Instagram: @musnetirl @dlr_arts).

Return of theatre nights and days?

There are tentative, distanced beginnings of live theatre: Theatre Royal Waterford has reopened following Covid-19 guidelines (including Fishamble’s Before by Pat Kinevane, which is also coming to the Pavilion Theatre in Dún Laoghaire); Bewley’s Cafe Theatre is back with lunchtimes in August; Kilkenny Arts Festival has just premiered Rough Magic’s version of Mike McCormack’s Solar Bones at the Watergate for very small, distanced numbers; Dublin’s Fringe and Theatre Festival plans will both have live elements. On the other hand, the Gate Theatre has had to close its doors until next year, as the realities of reduced audiences with social distancing kick in.

But for the most part theatre has been experimenting with other ways to present work. This week the Abbey Theatre premieres a new online adaptation of Lisa Tierney-Keogh’s play This Beautiful Village for the Zoom age, in This Beautiful Virtual Village.

Here the subject sounds like it mirrors the form, as the residents’ association meeting from the original play has gone virtual, reflecting the lockdown, which is also how audiences can watch the play.

Winner of Best New Play at the Irish Times Theatre Awards 2020, This Beautiful Village, where six people confront their pride, prejudice and privilege, was due to return to the Abbey stage this summer, ahead of a nationwide tour. Covid-19 put paid to plans and Tierney-Keogh and the team have adapted and updated it into a 60-minute virtual production, directed by David Horan, about what it means to co-exist in Ireland today, and reflecting the current realities of social distancing.