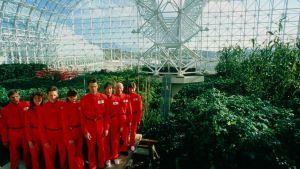 Spaceship Earth: The group seal themselves inside a gigantic, self-sustaining, $150 million glass biosphere.

It’s hard to say if Spaceship Earth has landed with impeccable timing or quite the opposite. A quarantine chronicle, Matt Wolf’s film concerns a group of eight new agers who, on September 26th, 1991, sealed themselves inside a gigantic, self-sustaining, $150 million glass biosphere.

Their plan was to remain there for two years and provide a blueprint for life in space. It was a big enough deal that The Golden Girls’ Rue McClanahan was sent to walk in the Arizona dirt to cover it.

The biosperians, as they called themselves, had already travelled the globe, picking up plant specimens and performing angular theatre, on a self-constructed ship. They were financed by Texan oil billionaire Ed Bass, who was happy to bankroll their exploits across properties they could enrich the value of.

It was Bass who paid for the biosphere and who called in Steve Bannon – yes, the Trump strategist – to intervene when the biosphere doesn’t quite go according to plan. The men and women of the biosphere, a troop of ill-defined eco-artists, find it difficult to grow enough food or to get enough oxygen inside their massive vivarium.

The press, which initially covered the event with a populist scientific excitement, go from treating Biosphere 2 as it is called – Earth is Biosphere 1, see? – like a Nasa launch to treating the biosperians like a cult. Well, if it walks like a duck and quacks.

There is no question that John Allen, their charismatic leader, is, as one of his followers testifies “a father figure”. Their cosplay astronaut outfits and their use of the term “biospherian” don’t help.

Frustratingly, the fascinating collapse of the eight-person commune under Allen’s leadership is tiptoed around. Filmmaker Matt Wolf does find interesting angles in the increasingly sour press coverage, as breaking contemporaneous stories reveal that a CO2 scrubber has been brought in.

The excitement around anything that pertained to space travel in 1991 is genuinely moving. But one is left with dark, messy hints rather than a satisfactory third act.    Engaging viewing just the same.