Taoiseach Leo Varadkar explained to a group of seven-year-olds what his job was during a visit to St Laurence O’Toole Girls NS, Dublin, to launch the Creative Ireland programme which intends to give children access to art, music, drama and coding. Video: Bryan O'Brien 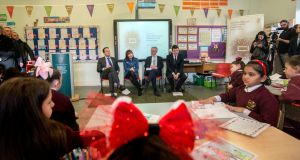 “Does anyone know what my job is?” Leo Varadkar asked the first and second class pupils in St Laurence O’Toole Girls National School on Seville Place in the middle of Dublin. A hand shot up. “Ruler of Ireland. ”

The Taoiseach beamed and mumbled something about it not always feeling that way. But you could tell he didn’t really mean it.

It seemed clear both he the girls had been reading the latest opinion poll in The Irish Times. Certainly Mr Varadkar seemed in glowing form as he graciously acknowledged his job description. “And I do have certain powers as the leader of the country,” he added. “One of them is to make sure you have no homework tonight.”

Ignoring a rebellious murmur from Richard Bruton that cancelling homework was the prerogative of the Minister for Education, the Taoiseach talked about the work he was doing building hospitals and finding jobs for people. But he also had to think about the future.

In what might come as a surprise to Dublin’s tram drivers, he informed the children that “in a couple of years’ time the Luas will be able to drive itself”.

All of which was a preamble to the business of the morning. The Taoiseach, along with his Ministers for Finance, Education and Culture, assorted civil servants, media types and hangers-on, had crammed into a small classroom in Dublin’s north inner city for the launch of Creative Youth, the Government’s plan to give every child in Ireland access to tuition, experience and participation in music, drama, art and coding by 2022.

The plan is one of the five “pillars” of Creative Ireland, the overarching cultural strategy devised originally by John Concannon,who has since gone on to head the Government’s mildly controversial Strategic Communications Unit.

“We don’t know what the future’s going to look like, but we do know it’s going to be really different. We think the best way to prepare you for the future is to help you to be creative,” Mr Varadkar said.

One of the major strands of the new plan is the Music Generation programme, which received its original funding from U2 and now reaches over 41,000 children and young people, both inside and outside of school. That number will increase substantially, the Taoiseach said, with a countrywide rollout “as soon as possible”. There will also be greater opportunities for young people to learn coding and computational thinking, along with the chance to participate in drama and theatre and choral singing.

Earlier, the Ministers saw the girls perform their nativity play, culminating in a fine rendition of Silent Night. New Minister for Culture, Heritage and the Gaeltacht Josepha Madigan took the opportunity to prove she can competently read a script in the first national language. Paschal Donohoe revealed that as a child he had not only written short stories but had them published. If he hadn’t chosen a political career, he told the children, he would have liked to have been a fiction writer.

Most poignantly of all, we heard that, as a young child, the Taoiseach had been forbidden to play a musical instrument. “The house I grew up in was a business as well, and my mother would never let me play an instrument because it might create noise,” he said wistfully.