There’s no room for Northern Ireland or the Troubles in The Crown series 3, set in 1964-77 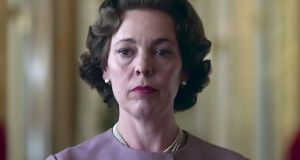 One is not amused: Olivia Colman as Queen Elizabeth in season three of The Crown. Photograph: Netflix

There’s lots of what royal watchers have come to expect in season three of Netflix’s The Crown. Queen Elizabeth – now portrayed in her early middle years by the wonderful Olivia Colman – is by turns flummoxed, aloof and peeved as she navigates the ship of state through the upheavals of the 1960s and 1970s. Philip is indiscreet, Margaret outrageous. We are introduced to the young Prince Charles and his girlfriend Camilla Shand.

Netflix also makes sure to dazzle with the now traditional grand palaces, swanky cars and forbidden assignations – Margaret’s canoodles with a baby-faced baronet, thus ushering in the era of the right royal bonkbuster.

Yet for Irish viewers the latest instalment of Peter Morgan’s glamorous portrait of the life, times and domestic travails of the British monarch is notable for its omissions rather than for its adherence to costume caper convention.

The historical span covered across the 10 episodes runs roughly from 1964 to 1977. It’s a period of considerable political and social disruption globally – but even more so in the United Kingdom, which of course witnessed the outbreak of a bloody internecine conflict in Northern Ireland.

Or did it? Watching The Crown you’d never guess that nationalists had been burned from their homes, 14 unarmed civilians gunned down by the first battalion of the parachute regiment or that the Provisional IRA bombed Belfast to a standstill and then brought its campaign to England. Charles would be appointed colonel in chief of the paras just a year after the time period in question.

And his father-figure mentor. Louis Mountbatten (Charles Dance at full Tywin Lannister clip) was to die in an IRA attack in 1979. The outbreak of Troubles would, you might imagine, be vaguely pertinent to the royals and their story, if only to foreshadow Mountbatten’s fate in Mullaghmore.

Not so, though The Crown does find space for many other major events. Britain’s accession to the European Economic Community is referenced; an entire episode is given over to the 1970s miners’ strike, the three-day week and the power cuts that wracked Britain. The Cold War also features, as does the Moon landing – Philip is jolly jealous of Neil Armstrong – and the 1966 Aberfan disaster in which 116 children in a Welsh mining village in Glamorgan died when a slag heap collapsed and crashed over their school.

Ireland, to be fair, does receive a mention. Two as it happens. The queen, on a fact-finding mission to France in her capacity as a horse breeder, notes that she sends some of her nags to the four green fields. In another episode there is a reference to the “United Kingdom of Great Britain and Ireland”. Or that at least was my memory from my initial viewing. When I went back to check the quote on Netflix’s preview service, I was informed that the episode in question was no longer accessible from Ireland, though the rest of the season was. Perhaps I imagined it.

The Crown has always styled itself as something other than hagiography. As would be expected given that Morgan has across his career as a dramatist chronicled some of the most absorbing political moments of the past 50 years – whether that be Tony Blair and Gordon Brown agreeing to share power over lunch in north London or David Frost grilling Richard Nixon.

But after three seasons tracking their every breath, utterance and indiscretion, there are reasons to suspect that his empathy with the Windsors now takes precedence. Elizabeth does some pretty awful things in The Crown, preventing her sister Margaret marrying the man she loves in series one and freezing out Charles from early childhood. Yet Colman is not allowed to be anything other than low-key charming, her biggest flaw the inability to display her deep-running emotions.

The scrubbing out of Ireland and of Britain’s fumbles in the North is of a piece with this. Nobody emerges well from Northern Ireland in the 1970s, the UK establishment least of all. Yet The Crown has insisted from the outset that Elizabeth is an ordinary woman doing her best in extraordinary circumstances. To see her reckoning with Bloody Sunday might shatter that spell. And it would perhaps push against the portrait of 1970s Britain as a charming basket case, eccentric as you like but essentially on the side of the angels.

Colonialism, as it happens, has always been a bit hit and miss on The Crown. Its approach to the subject started promisingly in season one as we saw native Kenyans standing twitchily by as Elizabeth, Philip and a room full of white people belted out God Save the Queen. But the dismantling of the empire received barely a mention in subsequent seasons while the North has thus far merely provided the backdrop to a quick royal visit.

One Irish character does feature in season three. Say hello to chippy Guardian reporter John Armstrong. His accent is adjacent to Brad Pitt in the Devil’s Own and he clearly bears a grudge against Lovely Liz.

Morgan, it should be pointed out in this context, is no Little Englander. Speaking to him several years ago I suggested that it felt apt for The Crown to arrive amid the initial aftershocks of the Brexit referendum.

“Now that we have made this inexplicable decision to cut ourselves off – or at least for some people explicable, let’s not make a judgment call – we have made the decision 52 to 48 to go alone ... and if we are going to go alone, isn’t it a good moment to look at who we are and what we are?” he said.

He has generally held true to his pledge to scrutinise “who and what” the British are. The Crown indeed holds up an unflattering mirror to UK, drawing a line from modern-day Britain to the black-outs, industrial strife and general chaos of the 1970s (and he make no bones about the dire financial straits Britain found itself in and how reliant it was on American support). But Morgan’s sprawling story as yet has no place for Ireland, north or south.